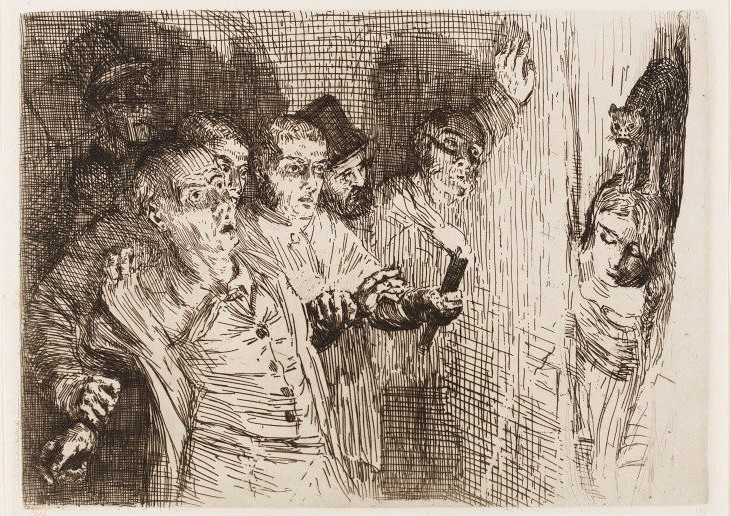 Today marks Halloween and with the chill in the air and the nights drawing in it is easy to see why this time of year has been seen as dark and sinister. As a keen reader of Gothic fiction and avid watcher of horror movies, Halloween has to be one of my favourite events in the calendar and brings with it the perfect opportunity to explore some of the frightening and macabre stories told by the works housed in the Prints and Drawings Collection. So grab your torches, get under the duvet and prepare to be afraid, be very afraid.

Dickens’s A Christmas Carol is perhaps one of the most well-known ghost stories of all time. The novel tells the story of Ebenezer Scrooge: a renowned miser who hates Christmas. It begins on a particularly cold and bleak Christmas Eve precisely seven years after the death of Scrooge’s business partner Jacob Marley. The image above, an etching by John Leech, illustrates the scene where Scrooge is visited by the ghost of Marley, a terrifying apparition, who has been cursed to walk the earth bound in chains because he lived a life of greed and selfishness. He tells Scrooge that he will be visited in the night by three spirits and that he must heed their warnings or else in death he will be cursed, as Marley has been.

Poe’s tale The Black Cat is a sinister story of madness and revenge.  The tale opens with the narrator, on the eve of his death, recounting a fantastic story from his past. At first the narrator portrays himself as a gentle man who loves animals. He and his wife own various pets of which he has one particular favourite: a large and beautiful black cat named Pluto. Over time the narrator’s temperament takes a turn for the worse and he experiences violent mood swings induced by his consumption of alcohol. One night, after returning home intoxicated, he grabs the cat who bites him out of fear. In retaliation, possessed ‘by the fury of a demon’, the narrator picks up a knife and gouges out one of the cat’s eyes. Following this incident Pluto lives in fear and flees at his master’s approach. At first the narrator sympathises with Pluto but this soon turns into a furious irritation that drives the master to hang the animal from a tree. On the night of Pluto’s demise, the narrator is woken by a mysterious fire that engulfs the house in flames; he and his wife flee. Even stranger still, one of the remaining walls of the house is imprinted with the image of a gigantic cat with a rope about its neck.

Some months pass and the narrator is found ‘half stupefied’ in ‘a den of more than infamy’ when something grabs his attention: a one eyed black cat! The cat resembles Pluto in every respect except for a splotch of white upon his breast. The origins of this cat are mysterious; no one has seen it before. Developing a fondness for the animal the narrator brings him home. However this fondness soon turns to dislike and one day, whilst drunk, the narrator almost trips on the cat. In anger he reaches for his axe to attack the animal, but his wife intervenes and he ends up killing her instead. To cover up the murder he conceals her body behind a brick wall in the house. At the same time the mysterious cat disappears. When the police come to the house to investigate the disappearance of the narrator’s wife a horrific noise is heard coming from within the walls. The police pull down the wall to reveal the wife’s corpse, ‘greatly decayed and clotted with gore’, with the missing cat upon her head. This climactic scene is depicted in the etching above by Alphonse Legros.

In her novel Frankenstein; or, The Modern Prometheus Mary Shelley introduced one of the most iconic monsters of horror. The narrative follows the story of Victor Frankenstein, an eccentric scientist who becomes obsessed with attempting to discover the secret of life. He devotes his time to research and develops a technique that allows him to reanimate lifeless matter. Once armed with this technique he spends many months in isolation creating his monster from old body parts and bringing him to life. Victor is repulsed and frightened by the hideous appearance of his creation and he decides to abandon him. The monster however is not intrinsically evil, in fact he is very sensitive and caring. It is not until his acts of kindness are rewarded with hatred and rejection that he becomes malicious and seeks revenge against his maker. It is as this point that the story gets particularly dark; toing-and-froing between acts of vengeance by the monster and his creator. This list of fatalities is long and the deaths are shocking and gruesome. This book cover evokes the Gothic atmosphere of the novel while the blood spatter gives a hint of the horrors within.

Below is a selection of works from the collection to inspire you to devise some of your own spooky stories for Halloween.