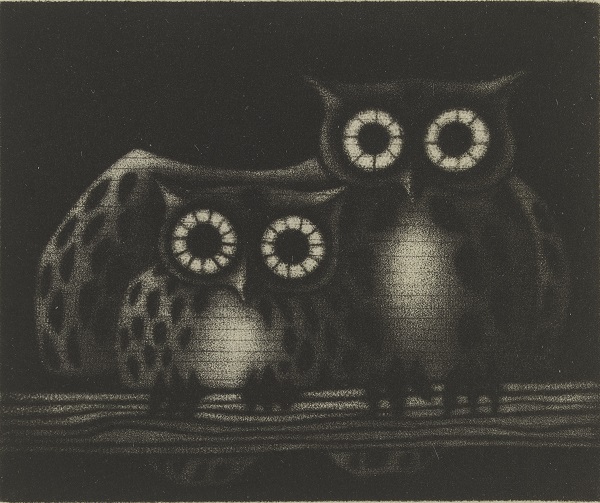 While on the lookout for spooky creatures to blog about for Halloween I noticed something curious – why are there so many owls in the Word and Image collection? It soon became clear that most of them were donated by the same man, Walter Strachan, but this raised more questions – who was he, how did his collection end up in the V&A and why was he so obsessed with owls? Curiosity piqued, I set off in search of answers…

Walter Strachan (1903-1994) was Head of Modern Languages at Bishop Stortford College for over 40 years, but also pursued a parallel career as a poet, French translator, art critic and connoisseur. His interest in art developed in the 1930s and 40s, and on a visit to the National Gallery in 1945 he was entranced by an exhibition of French livres d’artistes, books in which each illustration is an original artwork, directly created by the artist on the printing surface (for example copper, stone or wood). He made it his mission to raise the profile of this art form in the UK, writing numerous articles, giving illustrated lectures and urging museums and libraries to buy copies for their collections. He made regular visits to the National Art Library at the V&A as an ‘unofficial volunteer ambassador’, and encouraged them to buy around 60 examples of livres d’artistes, building up the NAL’s collection of artists’ books which is still being added to today.

Strachan built up close relationships with artists and publishers in France and in 1952, on one of his many visits to artists’ studios, he expressed admiration of a particular print, an illustration for a bestiary by Roger Chastel depicting – you guessed it – an owl. He was given a proof of the print on fine paper as a gift and word soon spread among the French artistic community that Strachan was an ‘owl man’.

He started receiving gifts from artists and publishers: some are proof plates from livres d’artistes, others are artworks created especially for him or commissioned by publishers, and owls also popped up in letters or greetings cards from artists (a card from the painter and printmaker Walter Spitzer reads: ‘I have drawn you some flowers and an inevitable owl to wish you a happy new year’).

The collection numbers some 58 prints, drawings and paintings, and what particularly interested me was the amazing diversity of artistic responses to the theme of owls. Different artists have chosen to emphasise different sides of the owl’s features, character and reputation: from the wide-eyed cuteness of Mario Avati’s mother and baby, to Bernard Gantner’s ominous shape peering out of the darkness. Although Chastel’s owl is only made up of a few lines it manages to convey a sense of menace in its furrowed eyebrows and poised claws, while Dalí’s contribution to Strachan’s owlery is quite comical with its bolt-upright stance and exaggeratedly large eyes.

There are also some beautiful and quite unusual techniques in the collection – this stylised image by Abram Krol was printed using plates cut into the shapes of the owl, moon and roof, leaving the images slightly raised, and the combination of aquatint and etching creates different textures within the print. I have enlarged a section of the image so you can get a closer look at the delicate geometric patterns representing the owl’s feathers.

Strachan supplemented his collection with a selection of older prints and drawings, including an intricate wood engraving by Thomas Bewick (the owl is only around 12cm high), and this beautiful Japanese woodblock print. Although Strachan described these as ‘aliens’ in his collection, I wanted to include them as examples of the wide variety of artistic interpretations of the owl in different periods and cultures.

Many of the artworks come with personal messages from the artist. Charles Russell signs his print ‘For Walter Strachan and his Congress of Owls’, Walter Spitzer writes ‘Pour Monsieur W.J. Strachan qui aime les hibous, je dedie cette gravure’, and – my personal favourite – a sketch by Albert Flocon is accompanied by the caption ‘Coals to Newcastle, owls to Strachan’. The below image, probably the last object to be added to Strachan’s collection, is also the most personal: a calligraphic drawing formed from lines of poetry, presented to him on his 90th birthday by a former pupil.

Strachan died in 1994 and bequeathed his owls to the V&A (the museum had held an exhibition of the collection in 1991); I have only had space for a small selection here, but photographs of all of them will soon be available on our Search the Collections website. There are some really interesting variations on the theme so it’s well worth a look!

I enjoyed seeing these old owl friends from the collection of my uncle Walter – I live in Australia and haven’t been back to the V&A for many years.
I have recently done a short series of owl drawings, caprices based on objets trouves (a springboard I learned from WJS). If you are interested in seeing how the Strachan obsession with owls is evolving, please let me have an appropriate email address to send you copies.
Thank you for the post , which I have only just come across.

I’m currently reading a collection, bought in a second-hand bookshop, of letters written to Walter Strachan – how fascinating to find out about the owls as well, which aren’t mentioned (so far) in any of the letters. He had a wide correspondence with many of the notable people of the day (and some I’d never heard of). What an interesting person he seems to have been.

Really enjoyed seeing these owls again. All very familiar as Walter was my grandfather and I remember them displayed in his house. I would be interested to know whether there are any further exhibitions planned.

Mr Strachan was indeed an interesting man, far more interesting than the French and German that he was supposed to be teaching us at BSC. His asides lasted for minutes and we would try and sidetrack him from whatever the subject of the day was, particularly when a test was expected! It was a pleasure to have known him, but less so at the time.