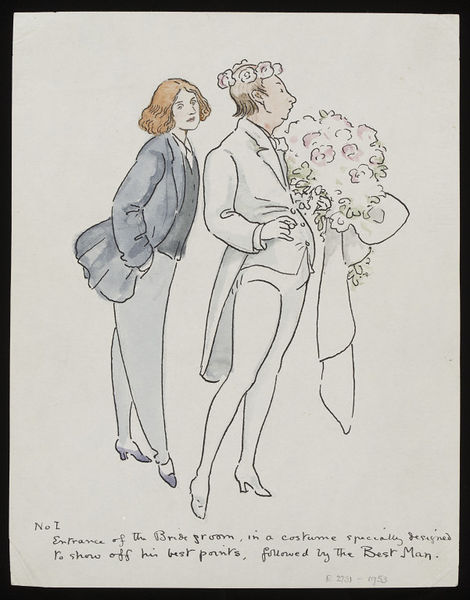 One of the unexpected pleasures of cataloguing a collection is when hidden treasures are discovered hidden behind dry archive descriptions, such as:

From the first image, my attention was grabbed by these high-quality charming drawings, far too well-done to deserve anonymity. Who for example, was this whimsical man in an extraordinary white outfit with rather fantastic legs?

The Saga tells the story of two little girls – Letitia and Rachel – playing at weddings with the artist as their bridegroom.

Letitia, the original “bride,” is less than happy when Rachel turns up to declare her own interest in playing bride!

A fight (Eastenders is nothing new, after all…) ensues between the rival brides, ending when the Best Man (or should we say Best Woman?) punches the bridegroom. At this, the brides immediately rush to tend to the bridegroom, and agree that he should “marry” both of them.

Afterwards, having resolved everything, the Best Man is shown heading off to her home, and deciding to hire the Victoria and Albert Museum (!) for a grand tea party. (Should you wish to follow in her footsteps, information can be found here…)

Among the Best Man’s guests are “Mr. and the Mrs. Graham Robertson” – and finally, the mystery of who the artist was is cleared up. It was a mere matter of moments before samples of the illustration work of Walford Graham Robertson came to light. At a glance it was obvious that the same artist had drawn The Saga of Letitia and Rachel, caricaturing himself with affectionate brutality as the hapless, weak-chinned, balding Bridegroom, and also in a deliberately and humorously prettified “self-portrait”

As it turns out, W. Graham Robertson was actually a quite attractive man. He is perhaps best known as the beautiful young dandy portrayed in a famous 1894 portrait by John Sargent now in the Tate Gallery,  Some twenty years later, Robertson would mock his own elegant reputation in the Saga, with his all-white bridegroom outfit “specially designed to show off his best points.”This is also possibly a knowing reference to his skills as a costume designer – Robertson was responsible for the famous green beetle-wing dress worn by Ellen Terry as Lady Macbeth, recently conserved by the National Trust, and featured in another Sargent portrait of Terry in the Tate. Apart from being a notable sitter, Robertson is an important figure to the Tate – in the late 19th century, he was one of the first to recognise the value of the works of William Blake, building up a significant collection of prints, drawings, and paintings that now forms the foundation of the Tate’s Blake holdings.

Two of Robertson’s portraits are in the National Portrait Gallery, including a portrait of Ellen Terry painted in 1923.  Since his youth, Robertson had been a devoted admirer of Terry, and eventually became part of her social circle. It is possible that the Best Man in the Saga, with her beautiful red hair and distinctive profile, is Terry herself. There are a number of other caricatures in the Saga, including the famous theatre and costume designer Charles de Sousy Ricketts running up an emergency costume for a distinctly underdressed Vaslav Nijinsky. The sculptor Jacob Epstein and another fellow art connoisseur and collector, Sir Edmund Davis (1862-1939) are also namechecked in the caption.

Young Rachel, one of the pretend-brides, is almost certainly Rachel Hill, a neighbour’s child who appears (a little older) in Robertson’s 1914 self portrait now held by the Russell-Cotes Art Gallery and Museum. Letitia, with her distinctive mop of blonde hair, appears to be the same little girl as that shown with her dolls in a 1912 Robertson painting titled ‘Phryne before Her Judges‘ owned by the National Trust.

Perhaps our readers can help us work out who the man and woman caricatured below are? The man, described as “Valued Friend,” appears in a number of images in the Saga, and is presented as a well-meaning meddler. The ultra-fashionable lady below, representing “the proper Authorities,” is presumably his wife. Please do comment if you think you know who they might be – or indeed, if you think you know anything more about the background story behind the Saga!

One final question: how did this group of drawings come to the Museum? They are part of a bequest from the solicitor Guy Tristram Little, who died in 1953. He was an enthusiastic collector of theatrical memorablia, photographs, greetings-cards and ephemera. As solicitor and executor to Gabrielle Enthoven, whose theatrical collection formed the basis of the Theatre Collections at the V&A, he would have worked closely with the Museum and seen us as an ideal home for his large collection.  And it was large – the Guy Little Theatrical Photograph collection now in the Theatre & Performance department numbers nearly 12,400 images! From the bequest the Prints, Drawings and Paintings department took on 1,500 items, mostly greetings-cards, letter-headings, and prints, but also including some original drawings and sketches – including the 23 paintings that make up The Saga of Letitia and Rachel.

The entirety of the Saga can be seen here. Please note that the search results are in reverse order, from end to beginning, so you should start at the bottom and work backwards.

I have some suggestions for the identities of some of the people depicted in Letitia and Rachel: the Best Man may be Mabel Beardsley, who was a friend of the artist’s and who caused a sensation round about 1910 by turning up at a ball dressed as a pageboy – or she may be Sarah Bernhardt , another friend of the artist who also liked cross-dressing; the Valued Friend may be William Heinemann, the artist’s publisher; the Proper Authorities looks very much like Stella (Mrs Patrick) Campbell, another actress friend who had a bit of a reputation for being difficult

Dear Janette – Thank you so much for these thoughts! I will have to research Mabel Beardsley and Sarah Bernhardt, as both certainly sound like they could be the Best Man. I know that the artist was a passionately devoted admirer of Ellen Terry, and that is why I thought she was most likely to be the Best Man. That is a very interesting suggestion about William Heinemann, and would make a lot of sense – I must look him up to see if he looks like this caricature! I also really like the suggestion that the Proper Authorities is Mrs Patrick Campbell, and do see what you mean about the resemblance!! I had assumed that the Proper Authorities might be the Valued Friend’s wife.

Sorry for the delayed response!

Following up on this: The Valued Friend does indeed closely resemble William Heinemann, so I think that suggestion is very credible. I did also wonder if he might be George Cornwallis-West, who was Mrs. Patrick Campbell’s second husband – but the resemblance to Heinemann is stronger. Heinemann did marry, an Italian novelist called Magda Stuart Sindici, but as they divorced in 1904, I’m pretty sure she isn’t The Proper Authorities. Given the theatrical flavour of the Saga, I think Stella Campbell does seem a very credible suggestion, particularly as she was such a significant contemporary actress on the London scene and would surely have been part of Robertson’s sphere.

Thank you again for such helpful and interesting suggestions. Such kindness and generosity goes such a long way to helping us interpret our collections.

The bridgeroom is indeed almost certainly Mabel Beardsley, as may be seen from an oil sketch by Robertson that appears on p.36 of “Letters from Graham Robertson” (Ed. Kerrison Preston, publ. Hamish Hamilton, 1953). In this sketch, Mabel Beardsley appears with almost exactly the same costume, hairstyle, and pose, as the bridegroom in Drawing 1 of the Saga.

Dear Howard – That is fantastic information, thank you so much. I am no longer working in the Prints, Drawings and Paintinga department, but I’ll pass this information on to my colleagues there. I really do appreciate your expertise and willingness to share your insights.

Actually I meant to say that it is the best man who is Mabel Beardsley. The bridegroom is obviously Robertson himself.