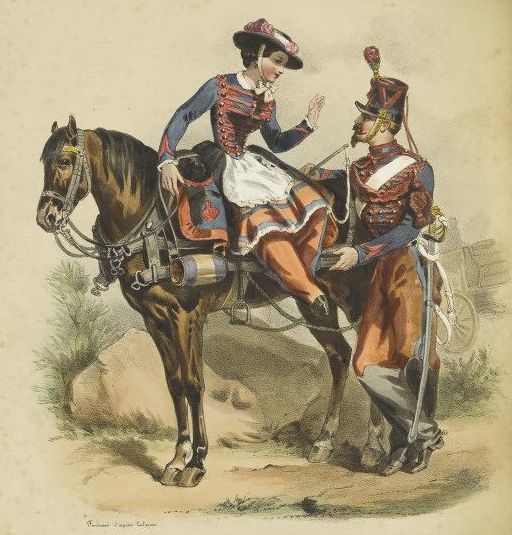 Whilst writing up the cantinière and vivandière blog posts, another three hand-coloured lithographs from the 1850s came to light. These images are particularly interesting, not only because their artist (Hippolyte Lalaisse) is identified, but because they offer further opportunities to compare the cantinière to her male counterpart. The first one (above) shows a cantinière on horseback with her tonnelet strapped to the horse harness, clearly showing the practicalities of the short overskirt for riding.

I was particularly struck by this image of a cantinière for a Zouave regiment serving drink to two soldiers, because she is not wearing a skirt over her voluminous trousers. From the neck down, this cantinière uniform is virtually identical to the men’s uniforms apart from a pair of white cuffs to the sleeves. The absence of petticoats and the virtually unisex nature of the male and female uniforms seen here is quite startling when one considers that it was not until the 1890s that a few brave women began to wear bloomer suits for bicycling; not until the 1920s-30s that lounging pyjamas, palazzo pants for beach and resort wear, and a few evening trouser ensembles began to be seen; and certainly not until the later 1960s that designers such as Gernreich and Esterel deliberately designed identical outfits for both sexes, and it became increasingly acceptable for women to wear trousers in more formal contexts. Yet here, over a century earlier, is a woman dressed virtually identically to her male counterparts, even down to the absence of a skirt. 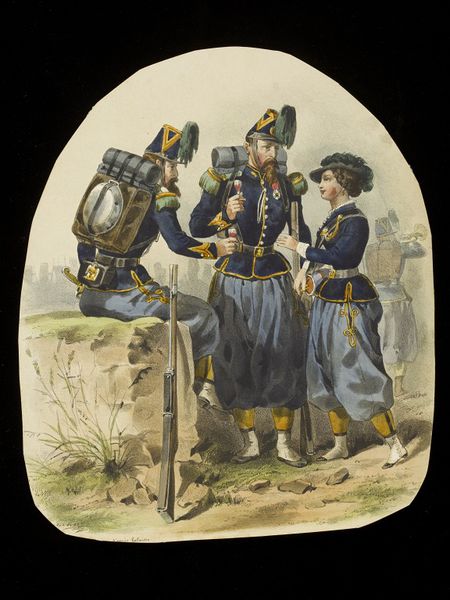 It is interesting to compare this to the sixth and perhaps most interesting of the cantinière lithographs that inspired these three blog posts. It shows its subject in a scarlet tunic and full bloomers, rather than long trousers, and a cloak with a tasselled hood. She is probably also from a Zouave regiment, as voluminous red pantaloons and a fez with a white turban wrapped around it formed part of some Zouave uniforms. Unlike Lalaisse’s Zouave cantinière, this woman is wearing an overskirt over her pantaloons. 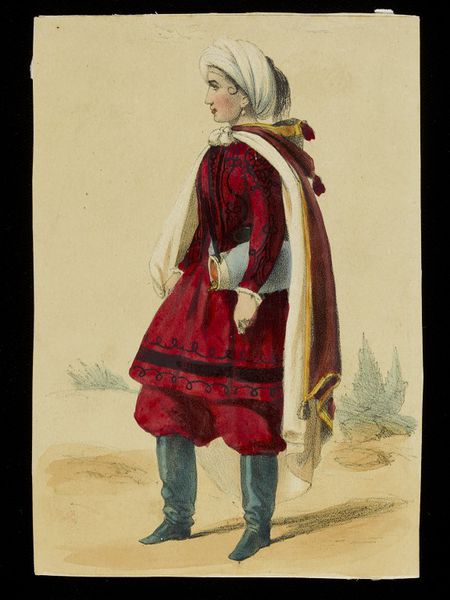 The third lithograph reinforces Thomas Cardoza’s point that cantinières, rather than being camp-followers, were valued members of their regiment and the wives of soldiers. In the image the cantinière is shown with her husband and their small boy. The cantinière uniform worn by the mother is what raises this depiction of a happy family above usual nineteenth century sentimentality. Were she conventionally garbed in a long dress and bonnet, the image would not be nearly as interesting. 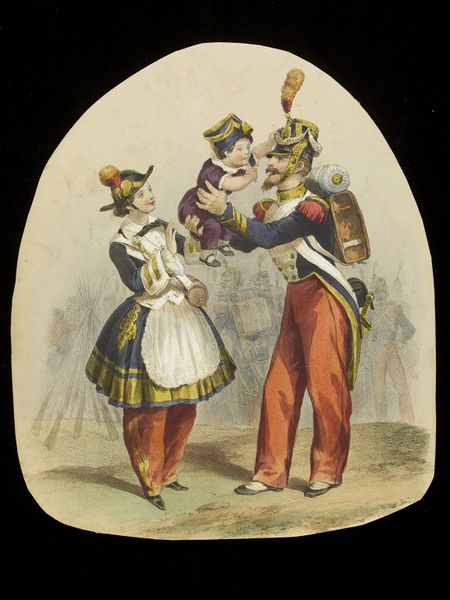 The idea of cantinières going into battle, and generally exhibiting “unfeminine” behaviour, was problematic for male officers and politicians, who for some time had been making concerted efforts to remove women from the military. In 1890, regulations were passed that forced the cantinières to replace their glamorous uniforms with grey dresses and metal identification plaques tied to their arms, and eventually, in 1906 – despite the overwhelming popularity of the cantinière – the French War Ministry banned them altogether. However, well into the 20th century and despite seeming efforts of military historians to ignore these women and sweep them aside as non-notable, the public image of the cantinière remained strong in advertising, popular imagery, and as the inspiration for theatre productions and even an opera.

Unlike the Vendôme Column in this 1871 French caricature of Gustave Courbet, the cantinière wasn’t going to be knocked down that easily… 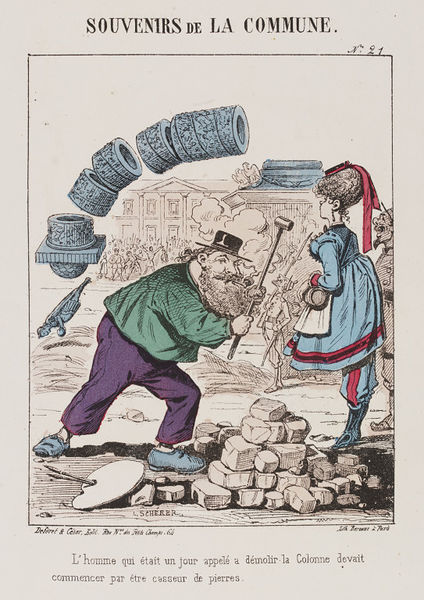 Caricature of Gustave Courbet and a cantinière published by Barousse. Hand-coloured lithograph.

This entry, and the two before it, owes a great deal to the work of Dr. Cardoza, whose website http://www.cantinieres.com/ is an extremely useful starting point for anyone wanting to know more about cantinières and vivandières.