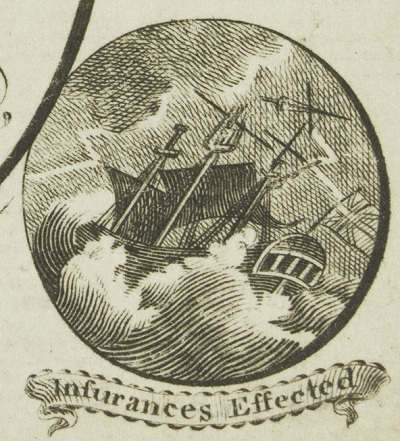 Whilst cataloguing, I often reflect on the many engravers whose work is now in our store, either anonymous, or signed only with cryptic initials or widespread surnames, and are fated to remain unknown. Only their work remains to silently attest to the skills of these unknown craftsmen and women. I may wish that A.R. (E.126-1941) and L.M. (E.131-1941) had left more clues to their identity. I may spend ten minutes scanning databases to try and identify ‘Proud’, an engraver from c.1760 (E.219-1941) – and have no success. But once in a while, the hunt for information pays off – which is what keeps me searching, hoping to be able to add a bit of extra information to our makers’ index. Here is one such story.

Whilst working through a collection of advertisements and trade cards from the 18th and 19th centuries, I came across this in the original accessions register.

Trade card of James Roberts, shipping agent of Liverpool, with a representation of a sailing vessel in each corner. Late 18th century.
Lettered with name of advertiser and
Wheatcroft sculp. Consignments from Abroad disposed of to the best Advantage. Merchandise Ship’d to any part of the World, upon the lowest Terms. Vessels and Freights procured. Goods & Ships Bought & Sold. Insurances Effected.
Engraving.
E.32-1949

So, who was Wheatcroft? A quick search for the keywords Wheatcroft, engraver, and Liverpool threw up the blog, Exeter Working Papers in Book History, run by Ian Maxted, a book historian, former librarian and dedicated researcher. The blog includes a transcript and tabulation of three directories of book-sellers in the UK between 1784 and 1811. Sure enough, under ‘Liverpool, Lancashire’, between Egerton Smith and Alice Williams, was one Thomas Wheatcroft of Castle Street, Liverpool. The information was drawn from the 1785 catalogue compiled by John Pendred, The London and country printers, booksellers and stationers vade mecum.

Bingo! Surname match, profession match, geographical match – and working at the right period in history! After ten minutes with the online Lancashire Parish Records, I learned that Thomas Wheatcroft, engraver, of Queen Street, and his wife Ellen had a daughter, Elizabeth, born 23 October 1783 and baptised 19 November. They had another daughter, Ann, who probably died soon after birth or was stillborn as there is no record of her baptism. She was buried 5th January 1786 in the church of St Mary, Walton on the Hill. Almost exactly six months later, on 11 July 1786, Thomas Wheatcroft, engraver, ‘formerly of Liverpool’ was buried alongside Ann. He was 29. If this is the same Thomas Wheatcroft, then his chronology can be pieced together as follows:

This, of course, does not preclude the possibility that there was more than one Thomas Wheatcroft, so we cannot say with absolute 100% certainty that this definitely relates to our engraver. The circumstantial evidence is compelling, however. Thomas Wheatcroft was one of many relatively ordinary artisans of no great significance, but to have reconstructed some of his story from such minimal information does give a sense of accomplishment and achievement. He now has dates and biographical information in the records, making him just a little more special than a single name and a vague ‘worked late 18th century’ may suggest.

Yesterday,  a member of the public commented on this post with very compelling circumstantial evidence that Thomas Wheatcroft was apprenticed in 1770 to the Liverpool-based engraver Thomas Billinge (1741-1816), who worked for Sadler and Green. Although as yet we have not found any of Billinge’s prints in the Paintings, Drawings and Prints collection, the Ceramics Collection has a handful of mid-18th century porcelain pieces decorated by Sadler and Green with transfer-printed engravings by Billinge. In 1770, Billinge took on an apprentice named Thomas Wheatcroft for £24. At this time Wheatcroft would have been 14 or 15 years old – absolutely the right age to take up an apprenticeship as an engraver.

This beautiful mid-1760s Worcester soft-paste porcelain mug was decorated in Liverpool by Sadler & Green with a transfer-printed Billinge engraving of Queen Charlotte. It is currently displayed in the World Ceramics Gallery, room 145, case 12, shelf 2.

We are extremely grateful to Mr. Roach for taking the time to pass on his information, as every little bit adds to our knowledge and enriches our understanding of our collections.

My 4x Great Grand Father was Thomas Billinge (1741-1816) Examples of his work are in the V & A. I believe that his sister Jane married Guy Green of SADLER & GREEN and Thomas Billinge started his career possibly as an apprentice to them.
In 1770 Thomas Billinge took on an apprentice Named THOMAS WHEATCROFT for £24. Unfortunately, I cannot find any further record for Thomas Wheatcroft but thought you would be interested in my info.

Thank you so much for your interesting comment! Certainly, in 1770, Thomas Wheatcroft would have been the right age to have been apprenticed to Billinge. I’ve looked him up, and it appears the V&A’s currently documented holdings of Billinge’s work are transfer prints on ceramics in the Ceramics Collection. I notice that the ceramics were decorated in Liverpool – yet another clue that Billinge’s apprentice has be the same Thomas Wheatcroft. This is very compelling circumstantial evidence. I will make an edit to the entry to this effect, and also update our database to this effect. I must express my gratitude, as the continued development of our records depends so much upon such generosity with information.

Sorry,… it will look crazy. But I found this blog after a pasta life regression, when I was named Thomas Wheatcroft – And in regression I heard the name of a place I lived – Walton – on this page I found ‘Walton on the hill’. I felt the sadnes after daughters dead and I found Thomas had a daughter. Very strange I know,.. but it is not a joke. Sorry for bad English. I live in Slovenia and I was 40 year old now. If you want – contact me: kochagna@gmail.com