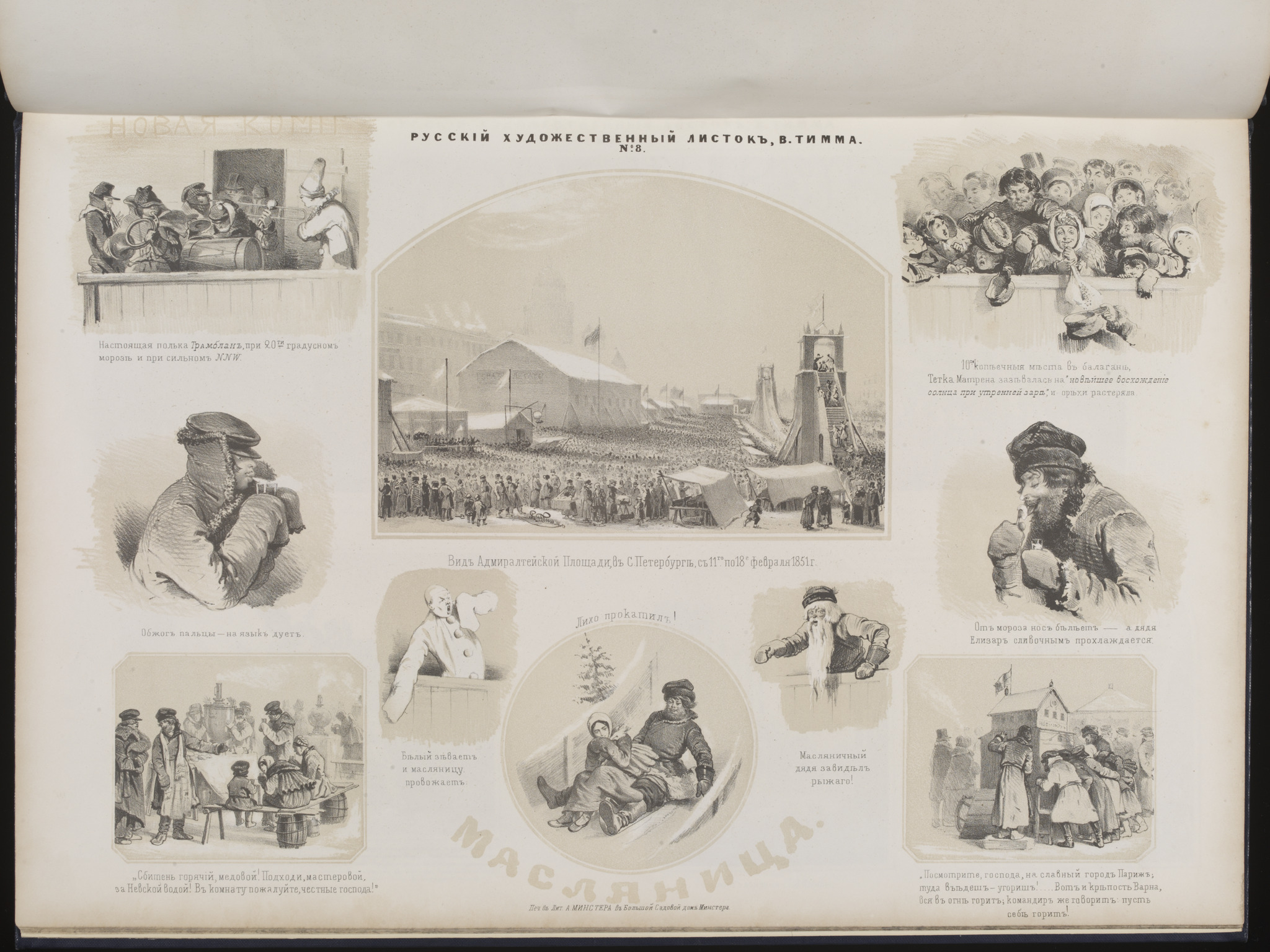 I’ve been learning Russian for a few years now and love to find things in the collection relating to Russian language, art and history. I was delighted to stumble across a copy of the ‘Russian Art Sheets’.

The ‘Russian Art Sheets’ was an illustrated gazette that recorded important events of the day in lithographs accompanied by a short caption. It was printed in St Petersburg three times a week between 1851 and 1861. We have only one copy in our collection: it’s from 1851 – the year of the Great Exhibition in London that was the origin of the V&A. The page shows the exterior of the huge glass exhibition hall with depictions of a few of the ceramic, metalwork and furniture objects that were displayed in the Russian pavilion.

There is another image of Queen Victoria and Prince Albert inspecting the Russian treasures on show.

Timm was from Riga, in what was then part of the Russian empire and is now Latvia. He studied at the Imperial Academy of Arts in Saint Petersburg under Alexander Sauerweid, a specialist in battle paintings. Battle scenes appear several times in our copy of the ‘Russian Art Sheets’. This is a copy of a painting by Horace Vernet, from the Winter Palace’s Collection, showing the taking of fortifications in the Wola district during the Battle of Warsaw in 1831.

It was Timm’s intention to create faithful renditions of Russian life, in images made by him and other artists. The gazette included portraits of celebrities such as these musicians who played at a concert in St Petersburg and Moscow in 1851. The top row shows Wilma Neruda the violinist and her sister Amalia, and the violinist Henry Wieniawski with his pianist brother Joseph, below are the Italian opera singer Mario and the pianist Julius Schulhoff.

Our copy also features portraits of distinguished military figures, with at top left General Field marshal Ivan Paskevich, Prince of Warsaw, one of the most highly decorated war heroes of 19th century Russian.

Timm was also interested in Russian culture as can be seen in this joyful collection of images of Russian traditions surrounding Maslenitsa – a holiday just before Easter. The name means ‘butter week’ and is similar to Mardi Gras or Pancake Day. As you can see, Maslenitsa involves feasting, carnival and fun activities such as sledging.

I particularly like this page that features the different languages spoken in the Russian empire at the time.

The central image depicts peoples from all corners of the Russian lands. Around this are (clockwise from top left) examples of: Slavonic, Old Slavonic, Moldovian, Greek, Tartar (Arabic), Georgian, Kalmyk (a language related to Mongolian), Armenian, Zyryanka (from north Russia), Serbian, Hebrew, German, Polish and Russian. The Russian text talks about the history of the language – its origins in Greek and how Peter the Great made reforms to the alphabet and introduced the civil script, the printed form of Russian letters.

Production of the ‘Russian Art Sheets’ magazine ceased in 1861 due to Timm beginning to lose his sight from an eye disease that sadly left him unable to draw. Despite only running for around 10 years, Timm’s ‘Russian Art Sheets’ leave us a fascinating and delightful glimpse into the people, culture and events of mid-19th century Russia.