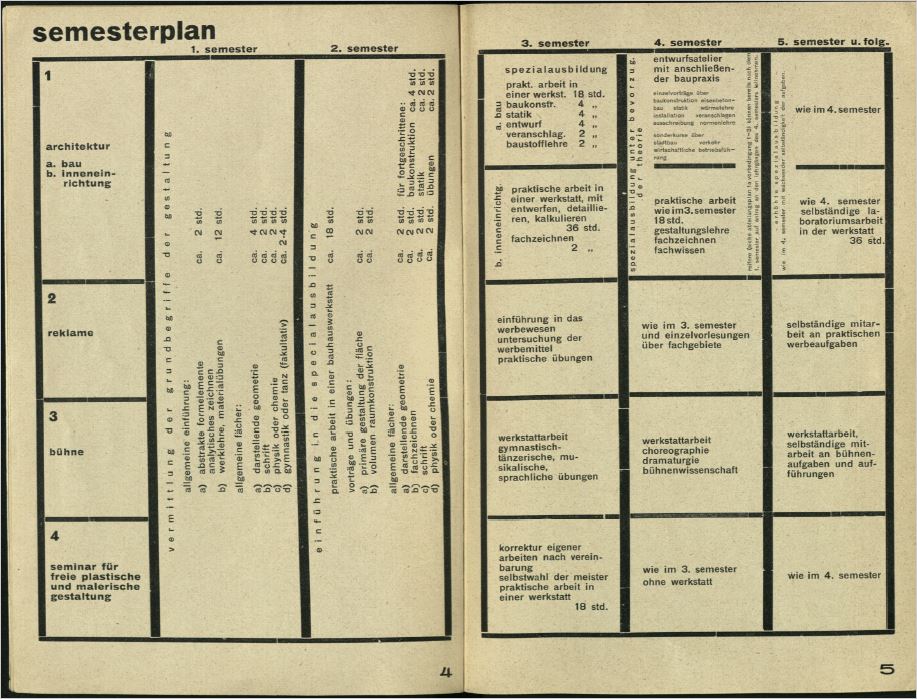 2019 is the centenary of the opening of the Bauhaus school of design in Weimar, Germany. This experimental design school influenced all aspects of design, art education and the spread of Modernism in the early 20th century.  The V&A’s National Art Library has Bauhaus material acquired for the Jobbing Printing Collection in the 1930s, including brochures, invoices and a prospectus.  These items are often small and unassuming, but can reveal much about the nature of the school and the changes it went through during its existence between 1919 and 1933.

This prospectus is from the period when the Bauhaus relocated from Weimar to the industrial town of Dessau and where it remained from 1925 to 1932. At Dessau the school experienced a more supportive host city after conservative Weimar enforced the closure of the socially and artistically experimental school. At this time it was designated a ‘hochschule für gestaltung’ (college of design), another sign of the break from Weimar where Walter Gropius had invented the term ‘Staatliches Bauhaus’ (State School of Building), when he merged the Weimar Schools of Fine Art and Applied Arts.

The front cover of the prospectus has a simple layout and no capital letters – a typographic style favoured by the Bauhaus – and which continues throughout the booklet. The prospectus was published by Artur Bodenthal, who produced other literature for the school.

The undated prospectus contains details of the curriculum and facilities at the school.

The ‘lehrplan’ (curriculum) on this page outlines the Bauhaus teaching scheme. ‘architecktur’ (architecture) was not taught at Weimar but was now central to education at Dessau under a new teacher – and soon to be school director – the architect Hannes Meyer. The course included interior design as well as building. ‘reklame’ (advertising) was another new focus of study at Dessau, taught by Herbert Bayer and Joost Schmidt. The school had a printing workshop where they produced advertising material for external firms – examples of which are at the back of the prospectus. Design for ‘buhne’ (theatre), under Oskar Schlemmer, was showcased at the school’s theatre stage and also the many musical festivities and parties held at the school – as described here. ‘freie malerische und plastische gestaltung’ (free pictorial and plastic design) included wall painting as the focus moved away from fine art, although artists Wassily Kandinsky and Paul Klee were still teaching. Under this heading is mentioned the preliminary course (grundlegende einfuhrung), which was obligatory for all students. This explored colour and materials as well as design theory.

These areas are expanded upon later in the booklet, with images showing examples of each discipline.

The teaching fees (lehregebuhren) include 10 marks admission fee. Other fees included 2 marks for obligatory accident insurance to cover any mishaps in the workshops.

The ‘lehrkrafte’ (teachers) are listed, with their names in lower case. This dates the booklet to about 1927 since Meyer (who started teaching architecture in 1927) and Gropius (who left in 1928) are included.

On the opposite page is an image of the school building, designed by Gropius and opened in 1926. The building has the flat roof and cubic shape of Modernist architecture. The photographer is credited as Lucia Moholy. Her photographs of the Bauhaus are often wrongly attributed to her husband Lazlo Moholy-Nagy.

Herbert Bayer designed this representation of the school’s curriculum (semesterplan) on a grid separated by simple bars and rules, using different font weights and sizes to convey different types of information. It is a more detailed, practical expression of the circular diagram used by Walter Gropius in 1922 to explain his new theory of teaching.

Details of amenities (soziale einrichtungen) on this page reveal aspects of day to day life for students at the Bauhaus.  The premises included bed and board for 28 students, a canteen, bathrooms (with both bath and shower), laundry and gym. The image of the dining room on page 27 reveals how a very communal life was encouraged among students at the school.

There follows an article by Gropius which includes notes on ‘normung und wohnungsnot’ (standardisation and housing problems). This references the estate at Dessau-Torten created by Gropius’ architectural practice in 1926 – 8, another investment project that shows how welcome the Bauhaus members were made in Dessau.

The Bauhaus devotion to all elements of design inspired all they produced, including ephemera such as this prospectus. The building, learning, living arrangements, and modernist design aesthetic are all represented in the content and design of this revealing booklet.