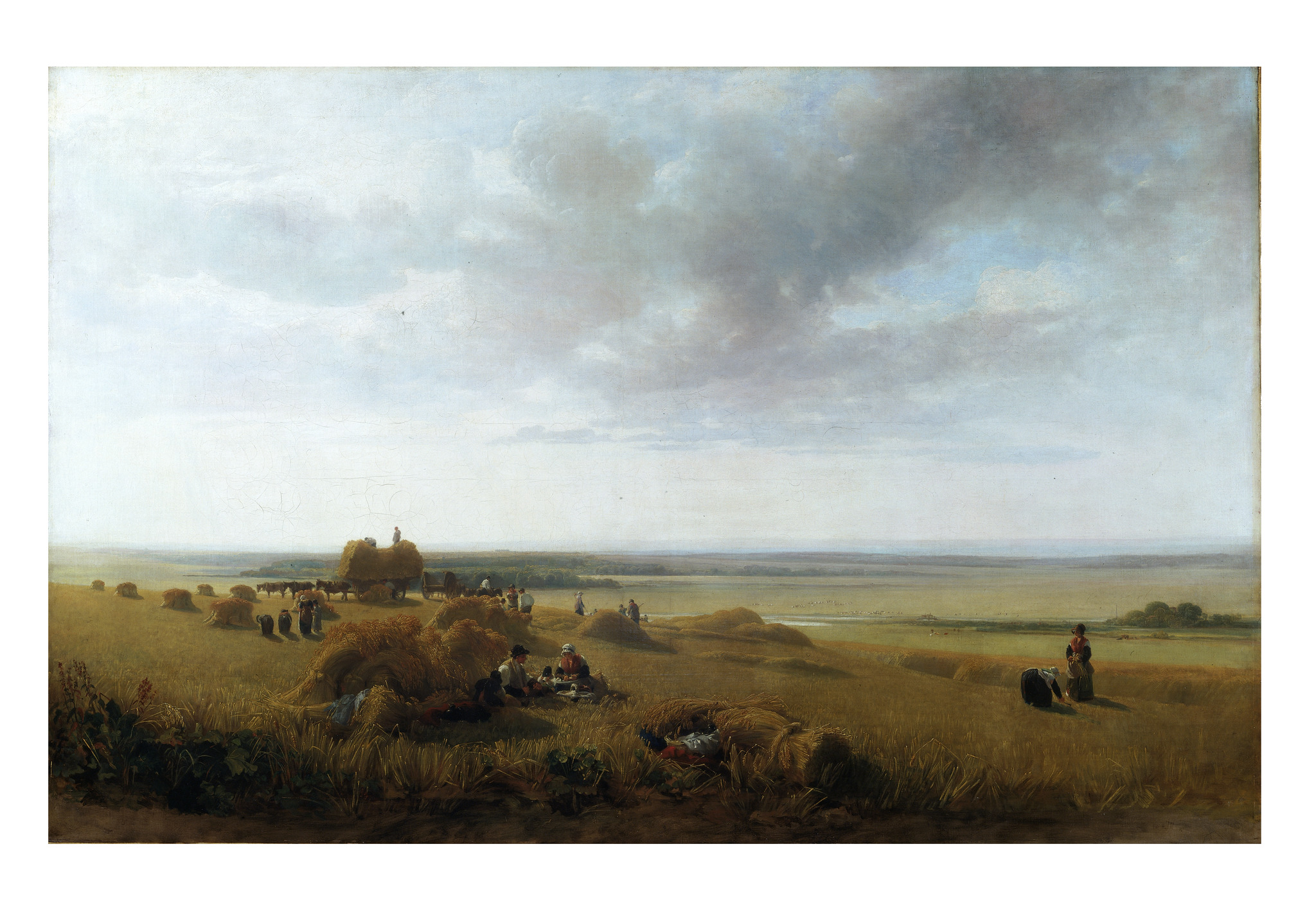 Peter de Wint’s ‘A Cornfield’ hangs in the Paintings Gallery, Room 87. It is a serene pastoral scene of agricultural workers gathering the harvest. Peter de Wint was known for his landscape paintings in watercolour and oil. He was particularly inspired by the countryside in Lincolnshire, and the wide, flat landscape in ‘The Cornfield’ may represent this part of eastern England.

When de Wint painted this idyllic pastoral scene in 1815, he would not have known that he had captured a pivotal moment for Britain’s agricultural situation that would soon be a political and economic flashpoint affecting all of society.

During the Napoleonic wars between 1803 to 1815, a blockade stopped goods crossing the channel between warring France and England. This meant that only native crops could be sold in Britain, with British farming landowners enjoying a guaranteed income.

Perhaps de Wint was aware that a large-scale painting of an abundant harvest could attract a wealthy buyer with a personal or even patriotic interest in celebrating this golden age of British agriculture.

In 1815, as de Wint exhibited his painting at the Royal Academy, the Napoleonic wars came to an end. Cheaper European crops could now enter Britain again. This broke the monopoly on the market that British farmers had held for over ten years, and decreased the prices that they could charge for their own crops. Large landowners wanted to maintain the comfortable life their crops ensured them; the idyll captured in de Wint’s vision of plenty. They used their substantial political clout to petition the government about this troublesome situation.

The government responded that same year by introducing the Corn Laws. These were a protectionist measure that imposed large taxes on imported crops (not just corn but also wheat and oats) from Europe. This meant that European crops were no longer cheaper, and the British producers again had a total grip on the market for corn in Britain and could control prices.

This situation benefitted producers of crops, but not those who had to buy them. After a poor harvest in 1816 food prices increased and riots broke out. The serene field workers in de Wint’s painting may have started protesting on the streets, as fewer of them were needed for harvesting and all of them were begrudgingly paying more for their food, and had less money to spend on other essentials.

It was only after decades of protest from workers, and also manufacturers whose customers had little spare money to buy other goods, for the corn laws to be repealed in 1846.

De Wint’s pleasant and tranquil painting may seem to be simply a pretty picture, but his favoured subject of agricultural landscape can never escape questions over land, resources, and prosperity, and the often challenging political, economic and social realities with which they are intertwined.