In the V&A’s extensive poster collection there is a Russian poster from 1916 for a charity to feed the hungry in Moscow. At this time Russia was noticeably divided between the haves and the have-nots, and this poster captures one of the problems in a society that was about to explode into a dramatic revolution in 1917.

The poster was issued by the Society for the Provision of Food for the Poor Population of Moscow, a charity trying to deal with the pressing problem of hunger in Russian society at the time. The charity’s long name is in the box at the bottom of the poster – you might be able to recognise the Russian word for Moscow – москвы, which also appears in the main text of the poster.

It advertised a сборъ collection, probably of food or money, on 27-28 November 1916, to help the population of Moscow.

The poster shows poor people eating at a large table, presumably in a facility set up by the charity to provide food to the hungry. 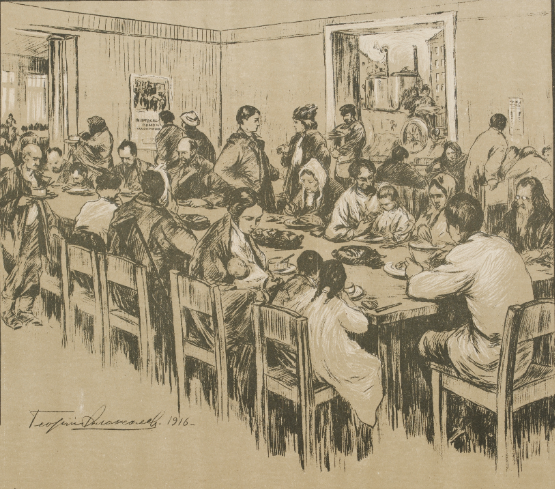 A combination of circumstances made it particularly difficult to provide enough food to Russian people, particularly in big cities like Moscow.

Russian agricultural practices were behind those of other nations in the early 20th century. There was a lack of machinery and modern methods which meant much work was done by hand by peasant farmers. This way of working the land was very hard work, and sometimes didn’t produce the large amounts of crops needed for the population of a nation as huge as Russia.

Some industrialisation was starting in the larger towns so peasants would leave the country, and farming work, to try to find better opportunities in the factories and urban work in the cities. This meant fewer farmers to grow produce, and more people in the cities needing to buy all their food.

Transport links were also not very advanced in early 20th century Russia so it was not always easy to move crops from country to city efficiently.

These issues would have caused enough of a problem in feeding the population of the huge Russain empire, but this empire, like the rest of Europe, was also at war. During what we now know as World War I (1914-1918) Russia, like England, was fighting against the alliance of Germany and Austria-Hungary. This meant that Russia prioritised the needs of the army over the rest of society. Many peasants who were working the land, and their horses, were taken from farmland to become soldiers, exacerbating the lack of agricultural workers even further. Any food that was produced was given to the army first, so there were fewer provisions left for the rest of society.

In 1916 the situation became critical. Rationing was introduced by the government to try to control food supply. Prices for food, either in legitimate shops, or on the growing black markets, soared. Now it was even harder for people to buy food, so it is no wonder charities, such as the society for the provision of food for the poor population of moscow were required. Food riots were common. The people had lost trust and confidence in the government, despite their attempts to manage the food crisis.

The Bolshevik party promised to improve the food situation and distribute provisions more fairly if they came to power, which they did in the revolutions of 1917. Hunger had led to revolution.

The Russian people had become disillusioned with the ruling Romanov dynasty and their government. Many people, especially supporters of the socialist  Bolsheviks, thought the tsar and his court had too much wealth and power while the people had none. However, some members of the Romanov family were aware of the struggles of the Russian people, and did try to help. Our poster mentions that the charity is supported by Grand Duchess Elizaveta Fedorovna – Елизаветы Федоровны – here is her name in Russian on our poster.

She had become a nun in 1909, sold all her jewellery, and devoted herself to a religious life. She was involved with numerous charities. She spent her time with the poor and sick of moscow, at the hospital of her convent, or visiting the slums of Moscow..

This didn’t save her from the anger of the revolution that took bloody vengeance on the Romanov dynasty, murdering the tsar and many of his family. Elizaveta’s arrest was ordered by Lenin and she was killed by the Cheka, secret-police, in 1918. Along with several family members and companions she was beaten, thrown into a mine-shaft, and then grenades were thrown in on top of them.

Our poster shows that charities, and even royalty, were hoping to manage the problem of food shortage. The pitiful but fairly serene image of hungry people seated together around a table receiving much needed food shows a hopeful solution. However in reality this desperate situation was followed by violence and upheaval as the everyday struggles of the suffering Russian people exploded into riots, revolutions and revenge.

This poster is part of the Word & Image Department’s collection. You will be able to view this, and many other prints, drawings, photographs and designs when our Prints and Drawings Study Room reopens in 2021.