We recently hosted an event at the National Art Library encouraging creatives to pick up pencils and design their own Christmas cards. They took inspiration from the work of our 19th century ancestors, hand-picked from a huge variety of sources available here at the NAL. Our collections actually started life as the library for the Goverment School of Design set up in 1837, the very same year Victoria came to the throne. Artists sought inspiration from Dickens’ Christmas books, the first Christmas cards and depictions of the Christmas tree in print. 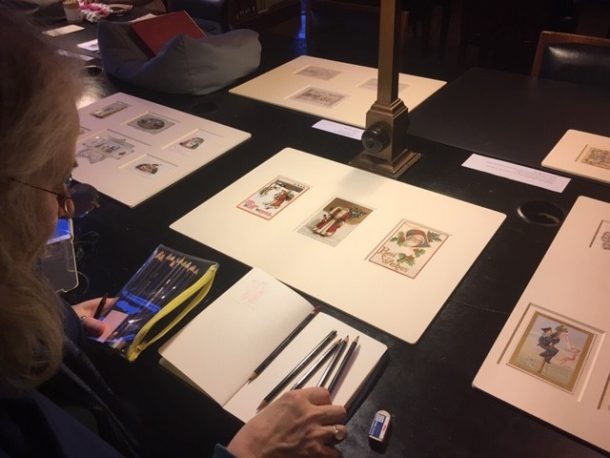 The results were inspiring; the group had time to sit and explore the material whilst soaking up the Dickensian atmosphere of the NAL’s historic reading rooms, sunshine gradually fading to darkness during this mildish December afternoon.

We began with a look at a signed first edition of A Christmas Carol. This copy had been signed the day before publication on 19 December 1843, dedicated to Dickens’ good friend John Forster.

Dickens’ collection of all 5 Christmas books, originally published during the 1840s, were on show in several versions from over the centuries. Dickens has a very special relationship with the V&A, more precisely, the NAL. We hold 12 out of 15 of the manuscripts to his published novels here in our Forster collection: John Forster was Dickens’ literary executor, having been a lifelong friend and fellow writer/journalist. Forster bequeathed his 18,000 volume strong gentleman’s library to us (including his Dickens holdings), enamoured by the inclusive educational remit of the Museum.

We all have some associations in our heads between Prince Albert and the Christmas tree. He was not responsible per se for introducing the German tradition of bringing in a tree to decorate at Christmas: this was Queen Charlotte, wife of George III who made the practice fashionable among the upper echelons of British society at the beginning of the 19th century. Albert brought the tradition to the masses, however, through this commissioned portrait of 3 generations of the royal family around their decorated tree, widely circulated in the Illustrated London News.

Our museum’s founding director, Sir Henry Cole, was the last in the “big three” personalities we concentrated on, associated both with Christmas and the Museum. Henry Cole has been widely credited with producing the first Christmas card. Tired of writing seasonal greetings on calling cards to his ever growing circle of friends and acquaintances he commissioned a seasonal card that he could customise with his name and names of recipients.

We went on to take a look at a wide variety of Christmas cards from the Victorian period. Initial examples see the reuse of more generic images from birthday and valentine card designs by manufacturers. We can also see the Christmas card’s roots stemming back to Henry Cole’s vision of a mass-produced adapted calling card: many cards were literally a piece of card themselves, with greetings written on the outside of the envelope.

Do look out for more events on the horizon bringing sketching and our library collections together. We encourage artists (and budding artists!) of all levels to get involved. Everyone will take different seeds of inspiration from works of the past which will no doubt blossom to form contemporary visions for unique pieces of artwork. If you would like to see some of the Victorian materials we had on show then you are welcome to join the NAL and request items though our library catalogue. 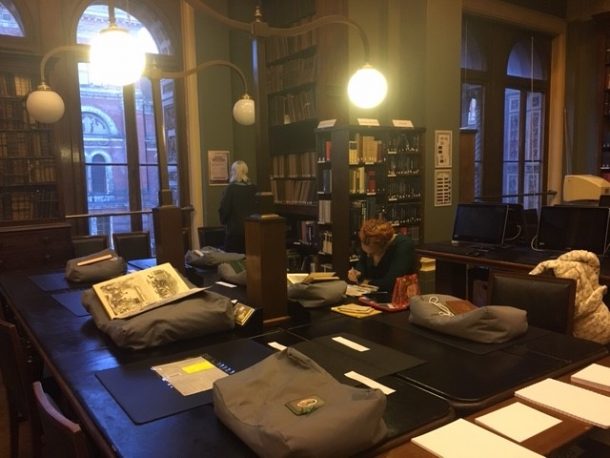