This morning a very nice group of jewellery design students came to look at some of the many jewellery designs in the V&A’s collection. Inspiring the creative industries has always been one of the Museum’s raisons d’être, and it was great to see contemporary designers getting excited about 19th century work, sketching and taking photos, and adding some historic examples to their repertoire of ideas. Almost all designers (as well as academics, writers, artists, musicians, film makers etc.) are influenced by the work of their contemporaries and predecessors, and part of the fun of studying the arts is understanding how new and interesting work is made from awareness of, and constructive interaction with, previous examples. Generally speaking, new ideas don’t just come from nowhere, and imitation of past masters is one of the best ways of learning skills that will ultimately enable creativity, a point well made in this article by designer Tomas Libertiny. This has always been the case, and Kent’s artistic education in Italy consisted of copying Italian artists, including sometimes etching their compositions: 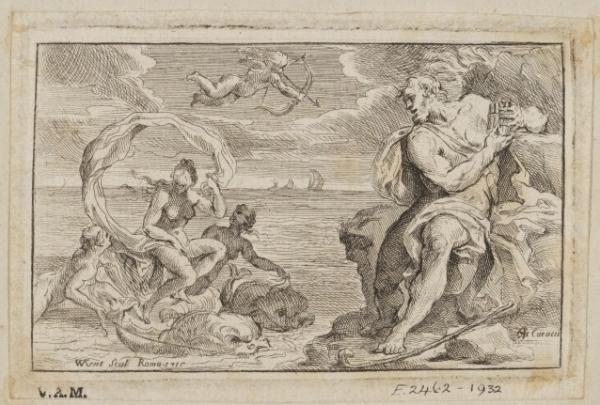 Yet at the same time, everybody from primary school children to pastry chefs knows that straight-up copying is not considered an acceptable way of producing something new. This year the Government proposed changes in the law to criminalise deliberate copying of design, and for centuries designers have sought legal protection against unfair use of their work. For example, in 1787 the textile designer William Kilburn successfully petitioned Parliament for copyright protection of his designs. 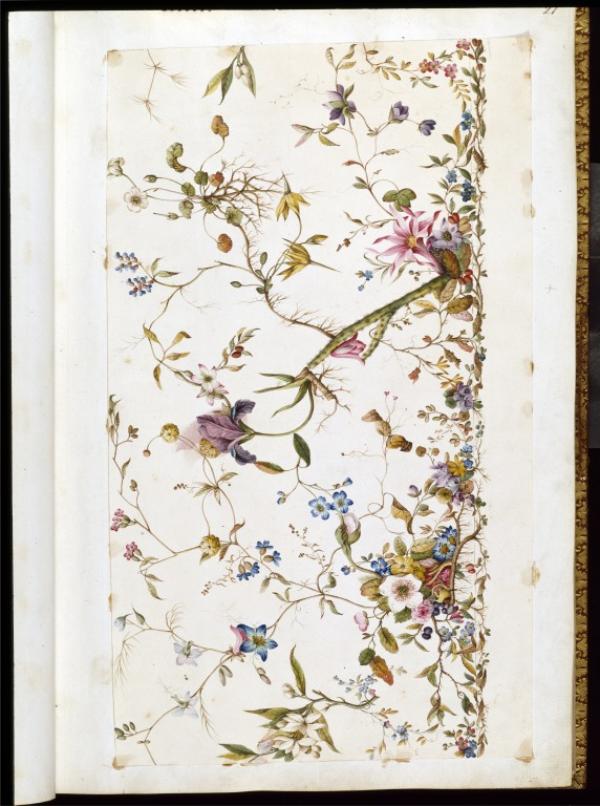 Kilburn’s designs were so commercially popular that they were pirated, reproduced, printed onto textiles and sold across the country within a matter of days. He eventually went bankrupt as a result.

Yet for other designers of the eighteenth century all publicity was good publicity, and William Kent was one of several who deliberately published designs for general circulation. The exhibition contains a volume of historic designs published by Kent (who sneakily included some of this own designs too), and a volume of Kent’s designs, which were published by his young assistant John Vardy. 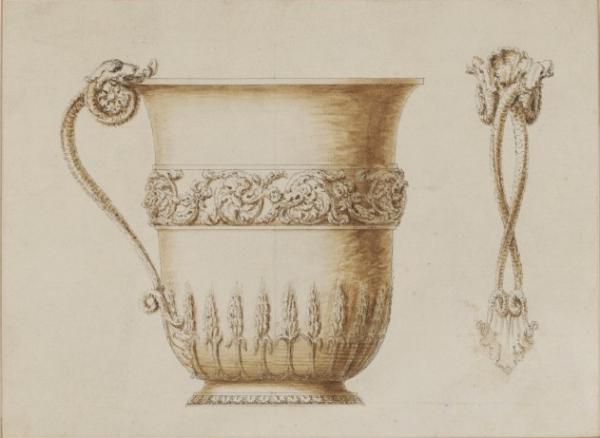 Prepatory drawing for a cup by John Vardy, after a design by William Kent. Engraved and published in ‘Some Designs of Mr Inigo Jones and Mr Wm. Kent’, 1744. Museum number 9304:2 © Victoria & Albert Museum 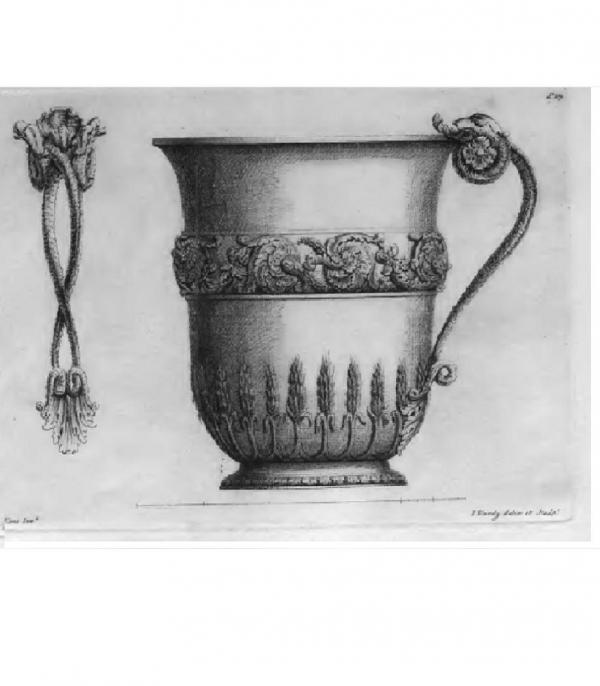 Kent’s mug design, now available for everyone to admire, and by implication, replicate. Note that the engraving process has reversed the image from the original drawing. John Vardy, ‘Some Designs of Mr Inigo Jones and Mr Wm. Kent’, 1744.

Sometimes we have examples showing how Kent’s ideas were replicated and altered by other designers.

For example, engravings A: 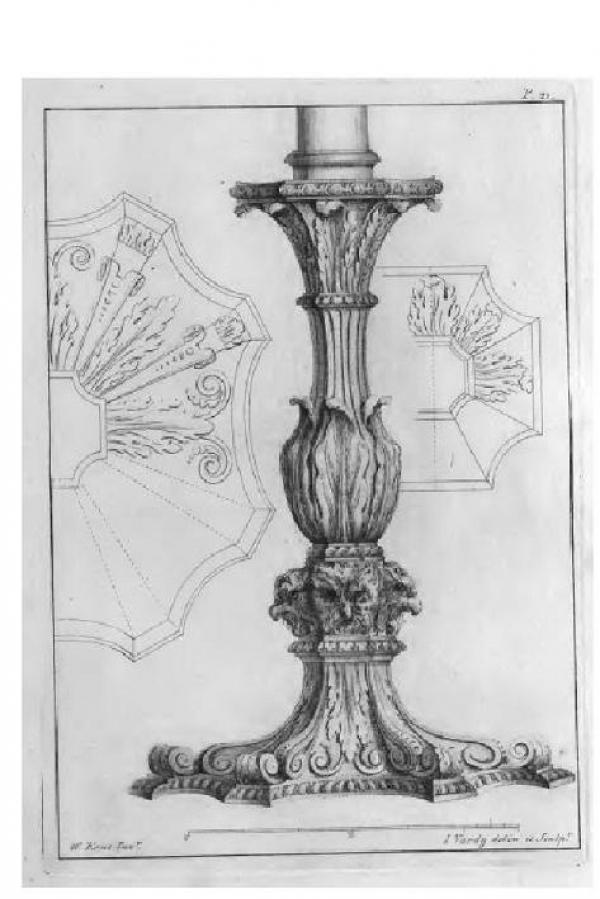 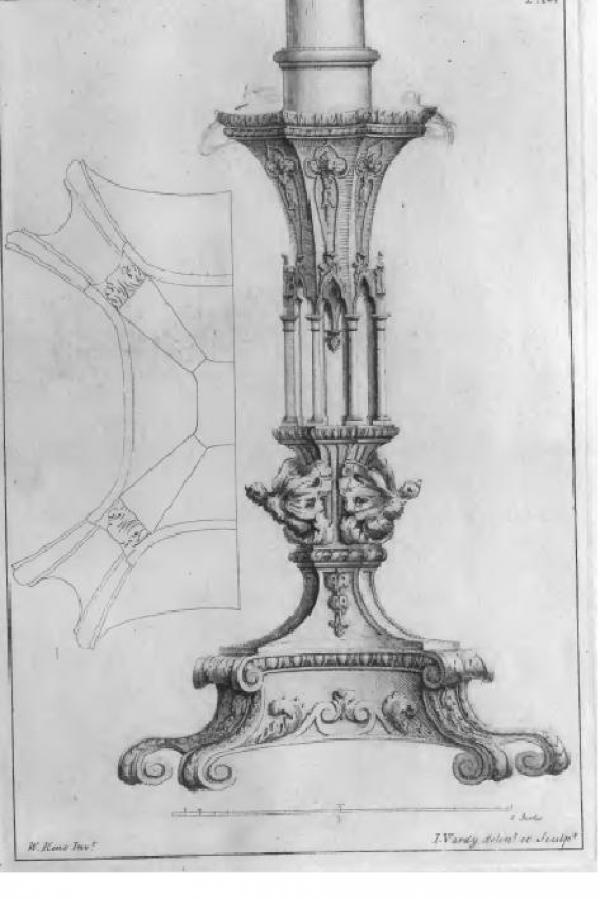 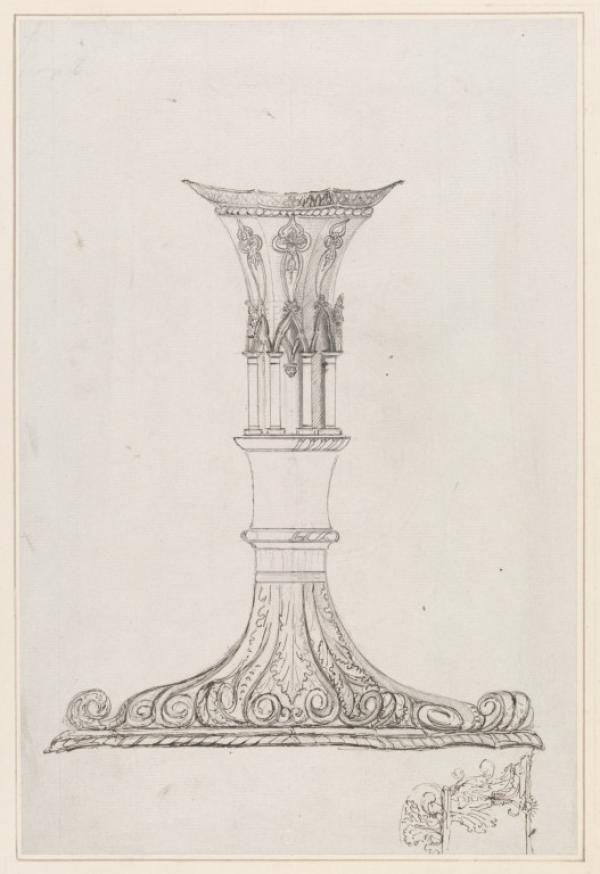 A design for a candlestick by an unknown artist, incorporating two of Kent’s designs, as published by John Vardy in ‘Some Designs of Mr Inigo Jones and Mr William Kent’, 1744. Museum number D.651-1886

These objects show that design in the eighteenth century, as today, existed in a complex suspension between publicity, exclusivity, dissemination of ideas and copyright to protect them. As today, artistic influence ranged from emulation, inspiration, appropriation and pastiche to straight-up plagiarism and fakery. In comparison with William Kilburn, whose textile designs were intended for the mass-market, Kent worked for very wealthy clients, meaning he didn’t have to worry that his ideas would be undercut by cheap copies. In fact, replication of his designs encouraged his success, increasing his fashionability and spreading the ‘Kentian’ style.