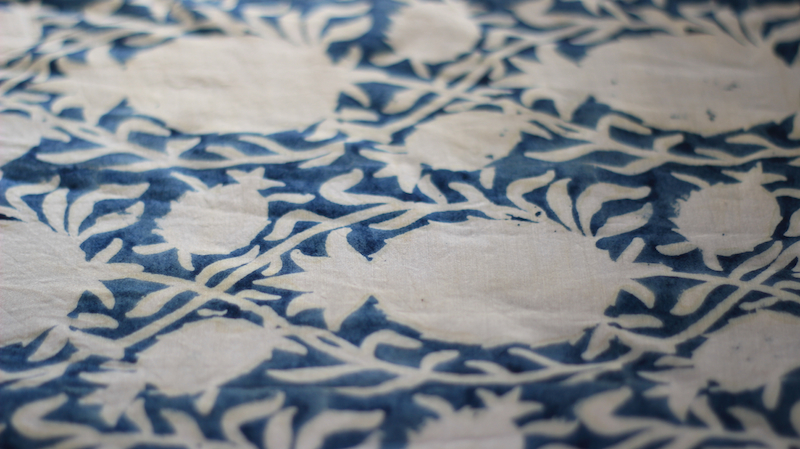 This week we are very pleased to offer you a guest post from Fabric of India sponsors Good Earth India.  Simran Lal, Good Earth’s Chief Executive Officer, shares her personal passion for Indian craft and her particular fascination with chintz…

FOR THE LOVE OF HISTORY

History, ancient cultures, languages and craft have always fascinated me. My mother may be partly responsible for this – she started her career as a studio potter and passed down her love of crafts to me. I grew up with an understanding that the importance of sustaining crafts cannot be emphasized enough.

Then an education in Art History instilled in me a broader appreciation of the cultural legacies woven in the fabric of craft cultures. I was inspired to write my Masters dissertation about the global, cultural, design and economic impact of Indian Chintz, a textile tradition of hand block printing with natural dyes coveted the world over.

Even today I am as intrigued – the specialized skill, the romantic prints and the undulations of colours of chintz of Machilipatnam – as I was, 20 years ago. As I stood under the handblock printed kalamkari tent of Tipu Sultan at the Fabric of India, I was awestruck by the grandeur of the Mughal era, when the value of craft in India was at its zenith.

THE PRIDE OF JEWEL IN THE CROWN

India’s fame has always rested on its rich tradition of handicrafts, the most coveted of which are undoubtedly the legendary textiles. Many ‘typically English’ fabrics find their origins in India and almost every process of textile manufacture (such as spinning, weaving and dyeing) in the modern mills of today can trace humble roots to India.

The commodities of spices, gold and diamonds may have been what attracted the world to India, but it is her exquisite textile textures, weaves and prints that made trade merchants rich over many centuries. Even today, India’s textile artisans are an integral part of fashion from both the East and West.

But behind this legacy lies a tumultuous history. Very little is known about the Indian artisans responsible for the significant innovation of dyeing cotton with permanent colours. This technique was an Indian secret for centuries.

Most consumers or even designers and students are unaware of the importance of the chintz trade between India and Europe and the impact it has made on the aesthetic sensibilities of the textile world. Not enough recognition has been given to the ingenuity and entrepreneurial acumen of the creative craftsmen who invented natural dye printing techniques and adapted to foreign influences to give chintz its unique position in the world.

Chintz today is used to describe any floral fabric, but its etymology offers insight into how very Indian the concept is and how it has been anglicized over the years. The term originated from the Hindi word ‘chint’ or ‘chitta’ meaning spotted or variegated. The distinguishing feature was that it was produced in India for the European market by the process technically known as mordant and resist dyeing. The designs were all hand-drawn with a simple bamboo pen called a kalam (literally ‘reed’ or ‘pen’), providing its local term of ‘kalamkari’.

What was most attractive about Indian chintz was the brilliance and fastness of its colours. Chintz yardage was originally sought after mainly for upholstery, often replacing the more expensive embroidered hangings used earlier. When word spread that Queen Mary had decorated a bedroom with calicoes, the use of chintz hangings on walls, floors and furniture became widespread.

Later, chintz became highly fashionable for the costumes of both ladies and men. The chintz trade was closely connected with the changing fashions in Europe and challenged the economic stability of western nations, provoking passionate political controversy. The absolute craze for these fabrics from India created havoc for the business of European wool and textile manufacturers who lobbied in parliament to levy a large import duty on chintz. Later, a number of acts came into force, which banned certain items. However, this ban did not stop many fashionable women from wearing chintz costumes. In France women wore chintz in the face of severe punishment, even death.

What makes the study of chintz so interesting is these multi-dimensional aspects of its trade. No other trade encompassed such diverse issues such as tastes, aesthetics, techniques, fusion of influences, economic implications and political stability of governments.

The innovations and impact of chintz gives us insight into the technical and innovative abilities of India’s craftsmen.The topic is very pertinent today as India is still a leading exporter of textiles, and her artisans remain as anonymous in a world that is asking, “who made my clothes?”

Kalamkari – that beautifully coalesced the rich and varied design vocabularies of different cultures and carries the syncretic legacy of Hindu, Muslim and European influences – is still made by Coromandel Coast artisans today as yardage hand block-printed with natural dyes. The resilience of kalamkari painters and printers, and their ability to adapt to new patronage and circumstances, while preserving their own basic traditions, is at the heart of the unique character of Indian chintz.

Each culture contributed their own native flora and fauna which were imbibed by the Indian artist and reproduced in his own style. The curious and receptive artist had the amazing ability to absorb, blend and transform in his highly creative way, the new patterns and images provided to him. Although his art was often very different not only aesthetically, but also symbolically, from those that he was introduced to, he successfully integrated the diverse elements and gave them an identity.

The marvellous resilience of the painters, and their ability to turn to new patronage, or new circumstances, while preserving their own basic traditions, pervades the history of this craft. It is this element of design, which produced such original patterns, loved by all of Europe in the seventeenth and eighteenth century that is worth probing into, to understand the aesthetics prevalent in those years.

It was the open mindset of the artisan that allowed him to interpret the craft is many various ways. He accepted foreign motifs and imposed upon them his own style and decorative ideas. This eclectic approach and his unerring ability to select those elements of contemporary Western fashion and popular culture that would successfully combine with his own sense of aesthetics, is what made the chintz a coveted commodity all over the world.

THE CONTEXT & THE CRAFT

Initially flowers, fruits, bark or roots were used to colour textiles. In time, methods were developed to make these colours more permanent by the addition of acid soil or mud containing iron — a knowledge common to many other cultures. But it was the Indian dyer who developed this knowledge into a science where he controlled an additive (the mordant) and manipulated the dye to produce desired colours as part of a rich and diverse palette.

It was recognised that mordants (catalysts such as tannic acid, acetic acid, uric acid, iron, alum), caused a reaction to occur between the dye and the fibre of the textile, which produced a colour resistant to soap and light. Once this was realised, the mordants were varied to produce different colours with the same natural dye raw materials.

The laborious craft of chintz requires the fabric to undergo 17 meticulous steps. From a young age, the children of master craftsman apprentice to learn a single, specialized function and become a skilled artisan. From making the block to treating the cloth to printing and washing, approximately 8 to 10 craftsmen are involved in creating each yard of Kalamkari fabric.

This art form emerged in Machlipatnam and prospered there due to ideal weather conditions and widespread availability of natural resources such as mordants, ample running & still water and abundant sunshine. Watch the Kalamkari Craft Film to learn more about the process:

REVIVAL FOR A NEW GENERATION OF GLOBAL FANS

As a student I felt naturally drawn to the historic value and influence of Kalamkari Chintz, and today as CEO at Good Earth I am delighted by the revival success of this languishing art. It is very important to me to work on reviving and sustaining craftsmanship, as artisans are the repositories of heritage traditions. We need to honour their knowledge and skill and ensure that they are given their dignity and due respect at the emotional and material level.

As a design house, Good Earth celebrates the culture and history of a rich and diverse land, and of course, crafts are an integral part of that legacy. It is important that the designs we create retain the spirit of a tradition so that the craftsperson can identify with what he is creating.

Our collaboration with Kalamkari artisans began in 2010 by working with existing blocks from the craftsman’s repertoire, using the Indigo dye that they were most familiar with. With sensitive design intervention, in 2013 we proposed extending their design vocabulary by introducing pineapples and palms to our tropical collections.

Last year we revived Madder Rose, a dye of Persian influence – a beautiful collection that celebrated the confluence of Arab, Persian and Mughal cultures at the cross roads on the Silk Route. We have been delighted with the global demand for contemporary Indian chintz and have grown from working part time with one workshop of 15 artisans to keeping 95 artisans across 3 workshops gainfully employed year round.

The artisan entrepreneurs have been so delighted with the response, that we are working on a collaboration to invest in their workshops for training and development to experiment and revive a more complex natural dye colour palette.

awesome beautiful…please read the article about integral waterproofing http://www.ahlibeton.co.id/2015/09/waterproofing-integral.html
hope u enjoy it

The glory of folk art
MastBani is founded on the very selfish intention of popularising the famous Indian art form from my homeland, Bihar. I’m sure many are doing it already. But I want to jump in and do my bit.
​
If you appreciate my emotion and admire my selection, add a piece or more from MastBani to your collection.