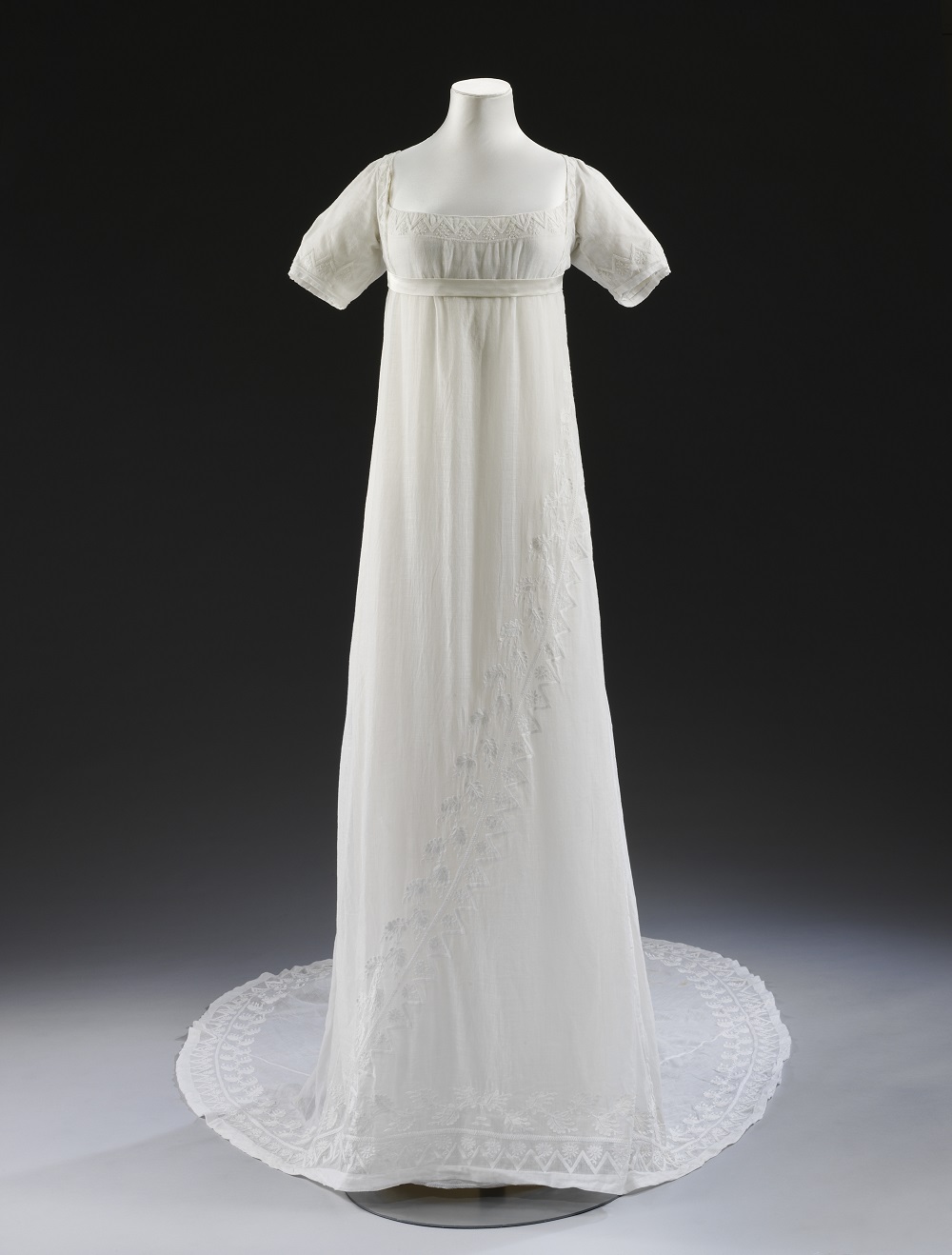 If you have ever watched a Jane Austen period drama, the style of the white muslin wedding dress worn by Mary Dalton Norcliffe in 1807 will appear as something of a familiar sight. The Georgian period endures as a symbol of British gentry and romance, and its fashions in particular continue to carry these associations.

Linen or muslin empire line dresses, tied with a sash at the waist, are remembered as the dominant style of the period, and Mary’s wedding dress remains as a charming example. These dresses skimmed the figure and this, combined with the lightness of the fabric, stood in stark contrast to the stiff-bodied gowns of the eighteenth century and the corsets and layered petticoats of the following Victorian period.

Late eighteenth and early nineteenth century England was preoccupied with neoclassicism. The Georgians romanticised that earlier time in the same manner that those who wear vintage clothes today may well do about, for instance, the 1950s. This interest in the classical period stemmed from a boom in the first half of the century in literary and philosophical criticism. As is generally the case with such idealisation, this move to romanticism and classicism acted as a refuge from the urban developments of the day. By selecting a cultural reference at one remove, and therefore ‘other’ to the everyday, the Georgians were able to imbue it with romance and exoticism. Draping their culture in sentimentalised interpretations and concepts of another time, it was not long until these dreamy ideals seeped into fashion.

These empire line dresses were influenced by the styles of ancient Rome and Greece, and so a perfect fit for the cultural preoccupation of the day. Equally, the eighteenth century saw the invention of the novel, and so the popularity of romantic texts about the lives of young women, by the likes of Austen and Frances Burney, began. In these works, dresses cut in this manner, particularly those of white fabric, are associated with courtship, and so the romantic connotations of such garments solidified.

However, these dresses had another interesting origin. Generally in fashion history, a child or pre-teen’s clothing is influenced by or, in essence, a miniaturised version of the garments worn by their parents. In this case, the style originated in children’s and early teen wear and then was absorbed into adult fashion. In the first half of the 18th century, young girls wore similarly simple frocks of linen or muslin, until switching to stiff bodied gowns at around the age of 13. Still, for everyday wear, these sash-tied dresses continued to be considered appropriate, and by the 1780s the age at which a girl could still wear such a dress had reached further into their teen years. After the 1780s, the style was adapted and adopted for the adult female form, and became a steadfast style in fashion for the turn of the nineteenth century.

Therefore, Mary Dalton Norcliffe made a fashionable choice for her marriage to Dr Charles Best at Saint Michael-Le-Belfry in York, 11 June 1807. As any bride at this time would have expected to rewear her wedding dress, by choosing white Mary was both on trend and in keeping with its contemporary connotations of courtship. Equally, as Mary, the youngest bride featured in our exhibition, was only 17 when she married, the fact that this style originated as a teenage fashion feels pretty appropriate…