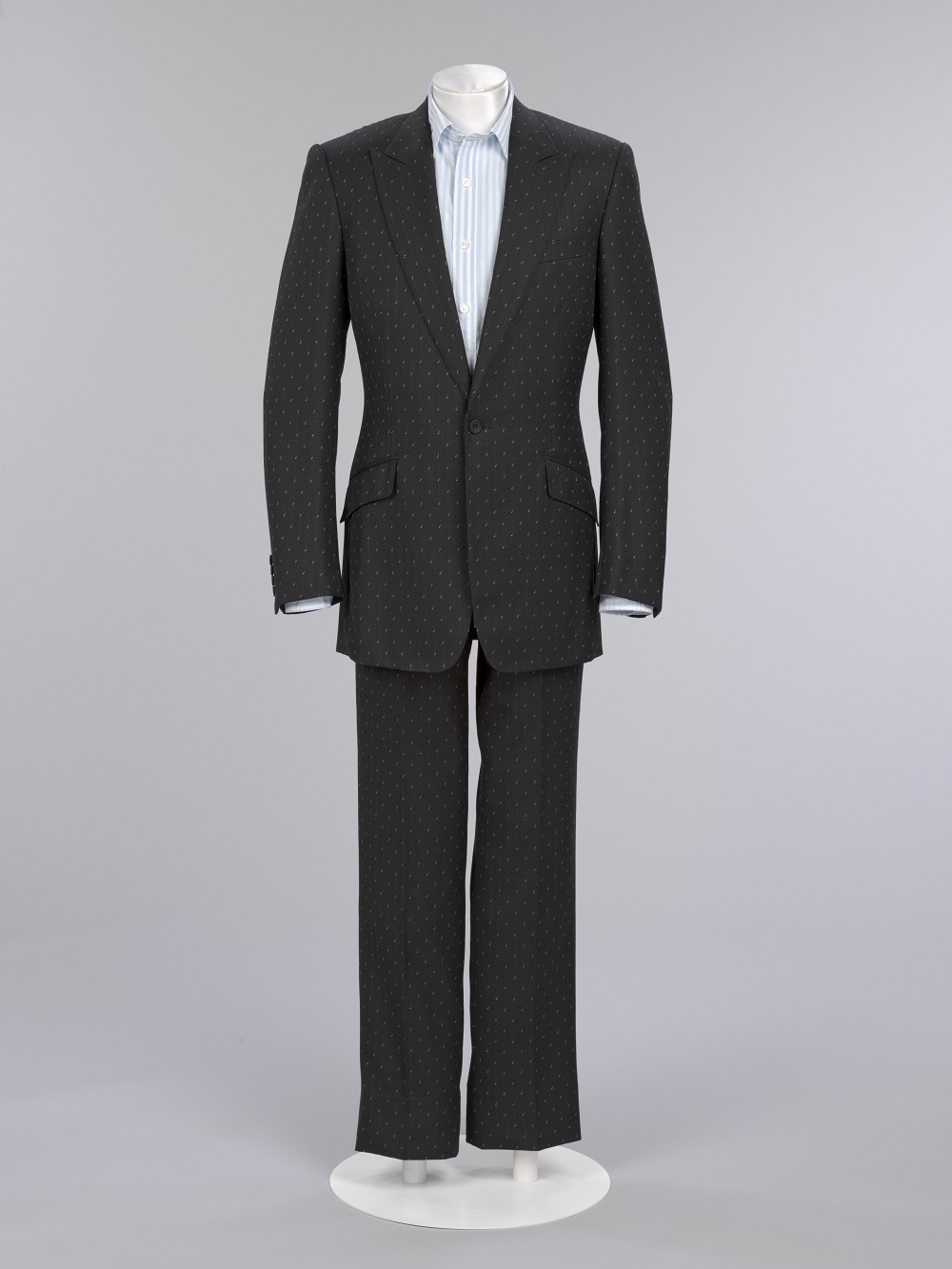 While we are honoured to have the wedding dresses of celebrities on display, we were equally touched to be loaned and trusted with pieces worn by those who are, perhaps, less well known but no less significant. While curating the exhibition, an emphasis was placed on representing lots of different kinds of brides and weddings in our choices. This aim resulted, rather happily, in the inclusion of several outfits and pieces which are actually on loan from current and former V&A staff…!

The first of these internal acquisitions were the suits worn by Christopher Breward and his partner James Brook for their civil partnership ceremony on 18 August 2006. Christopher Breward is a leading fashion historian and the former Head of Research at the V&A. Christopher’s suit was purchased at Kilgour on Saville Row, and he wore it with a Jasper Conran shirt. James meanwhile wore a tailored wool-blend pinstripe suit by Timothy Everest for Marks and Spencer’s.

The suits were donated to our collection in 2009. They serve as an interesting acquisition both as examples of modern tailoring and in reflection of the changes in law surrounding same sex partnerships and marriages. It is also quite satisfying to enter the garments worn by an important fashion historian into such a significant fashion history collection!

The second set of V&A staff wedding outfits we have on display are those worn by Joanna Hannah-Grindall, the museum’s Corporate Partnerships Manager, and her husband Nana Kofi Twumasi-Ankrah. For their traditional Ghanaian ceremony in 2012, they wore garments made from matching fabric. The colours of the brocade used on these pieces hold cultural symbolism for the Royal House of Amanokrom, from which Nana is descended. The choice of colours holds further significance, as blue symbolises limitless wisdom and gold represents prosperity.

The third V&A staff wedding outfit we included was worn by Anjali Bulley, nee Raval. Anjali is a Managing Editor in our Publishing Department. On 31st October 1998, she married Paul Bulley in a Hindu ceremony at the Clay Oven Banqueting Suite in Alperton in north-west London. The wedding celebrations took place over 3 days, with the wedding on the 3rd day, a Saturday. Anjali wore a white, red and gold panetar sari given to her by her parents, and a red and gold gharchola sari given to her by her new in-laws. This tradition allows both sets of parents to sartorially and symbolically invest in the wedding and new marriage. This sari is beautifully decorated with tie-dyed elephants and peacocks are symbols of good luck. Both saris were purchased in Gujarat and arranged in the traditional manner.

By including these wedding outfits from within the network of the V&A we both opened up the lives of our staff to the public a little more and injected some diversity into the kinds of garments on display. It also allowed us to show that, whether you’re on the cover of a magazine or behind the scenes at a museum, all wedding garments are special, and all last as a symbol of an individual and their relationship.