A couple of days before the exhibition launched, I had a surprise – but very welcome – visitor. Mrs Laurel Robinson, formerly Laurel Heath, one of the bride’s whose dresses we have on display, had flown in from her home in Ibiza to attend the Private View, and just couldn’t wait any longer to take a look around.

We were really touched that so many of the men and women who had loaned or donated pieces to us felt such a connection to the exhibition. Equally, just as it is a thrill for a curator to finally handle an object after studying it on the page, it has been great to meet some of the people whose personal stories, told through their clothing, we have been immersed in for so long. As Laurel’s Norman Hartnell dress for her 1957 wedding to Mr Gerald Albertini is a particular favourite of mine from our displays, it was fun to find out that the woman behind it is still just as glamorous as I’d hoped. 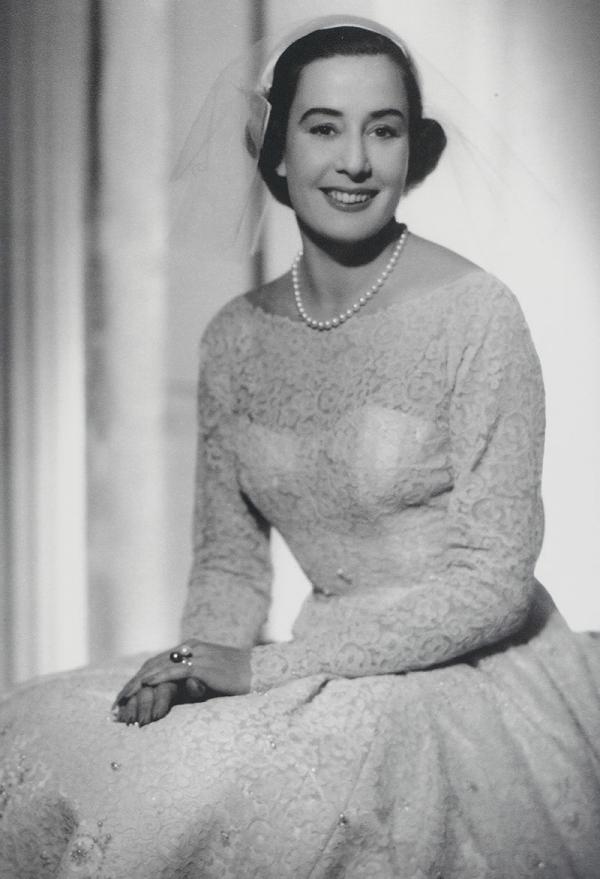 Meeting her also gave me further anecdotal insights into the dress’s design – and how it actually felt to wear it. While they might not fit neatly into a traditional catalogue entry, such details bring clarity and energy to the social history and personalities fashion history can represent. 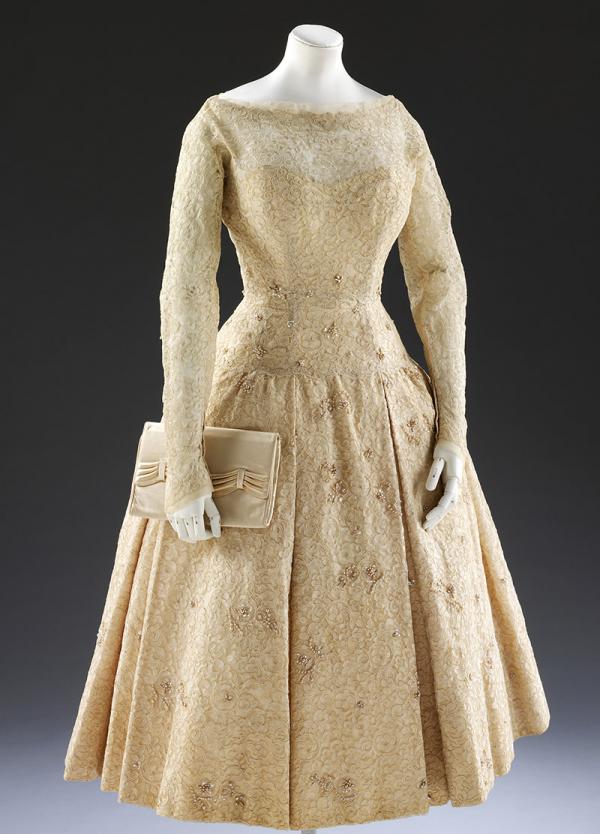 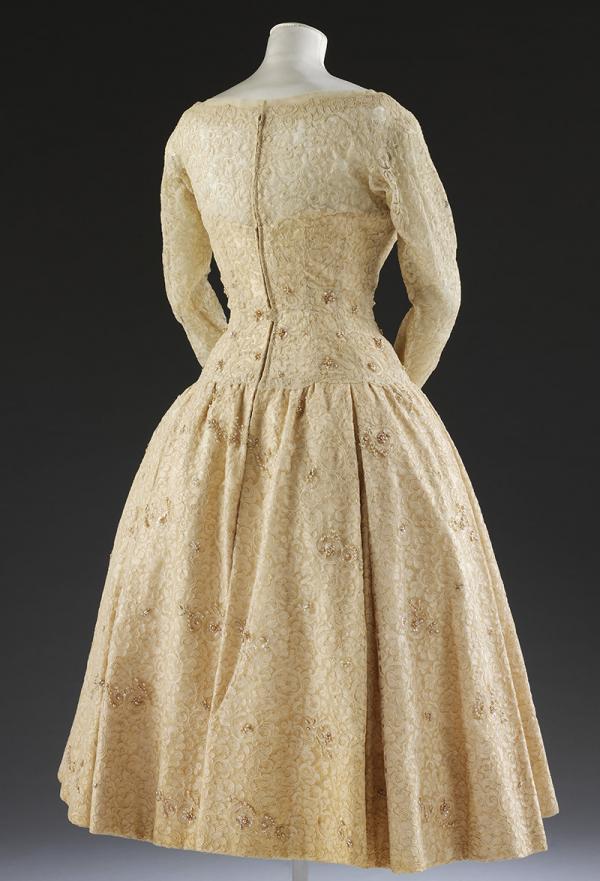 During her visit, Laurel talked warmly about the dress, and how lucky she had felt to have it. Her new mother-in-law to be was always immaculately dressed, and had all her clothes made for her by Norman Hartnell (let us just pause to picture what that would be like…). Due to this collaborative relationship with the designer, she offered to give Laurel a dress by him to wear on her big day. This was Laurel’s first personal taste of his workmanship and eye for detail.

As this was to be Laurel’s second marriage – her first husband had, very sadly, died the year before – she told me she wanted to avoid the floor length fuss of a first-time bride. Instead, Hartnell made her a dress which rested at mid-calf, its skirt rounded and full in the manner of a ballerina’s. Such cuts were also hugely fashionable at the time, popularised by the likes of Audrey Hepburn in ‘Funny Face’, which came out the same year as Laurel married Gerald. The late fifties were a time of glamour and a return, after wartime restraint, to elegance. The dress’s cut – a classic close bodice and wide skirt invested with a little flirtation and fun through the lace and beadwork –attaches it tightly to that style.  It also serves as an example of the move in the 20th century for brides to wear dresses whose designs were influenced by eveningwear, and ones which were made to be worn for just one day. 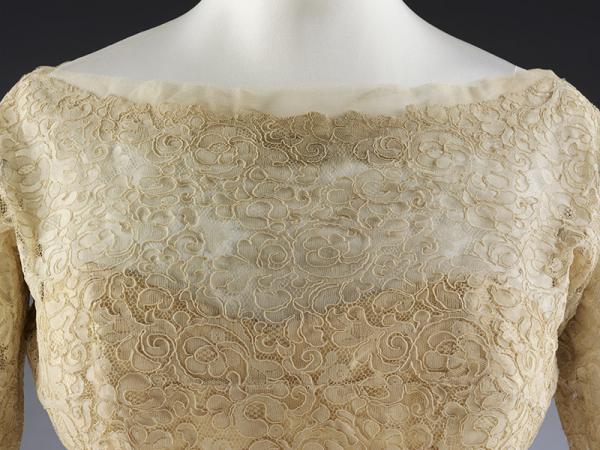 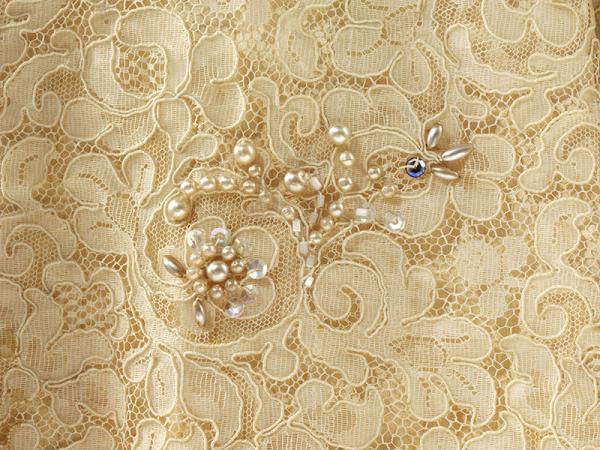 Excited to wear her wedding ring set with black and white pearls, Laurel refrained from wearing gloves at the ceremony. To satisfy that tradition, instead she asked for the sleeves of the dress to end mid-way onto her hands. At this point, the lace is cut on a delicate slant, framing instead of covering her fingers. 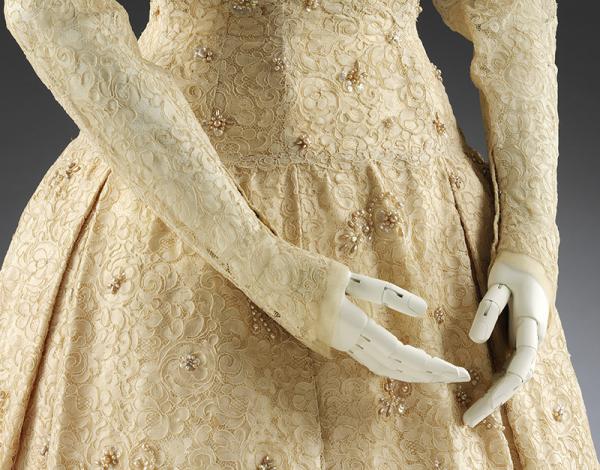 Laurel informed me that the dress was actually exceptionally heavy to wear. While we often commented during installation on the weight and restriction some of the 18th and 19th century dresses must have put upon the bodies of their wearers, this factor had not occurred to us when we considered our later examples. Luckily for all involved, Laurel said she was too excited at the time to feel this heaviness, and felt nothing but affection when seeing the dress again, at last displayed for all to enjoy. 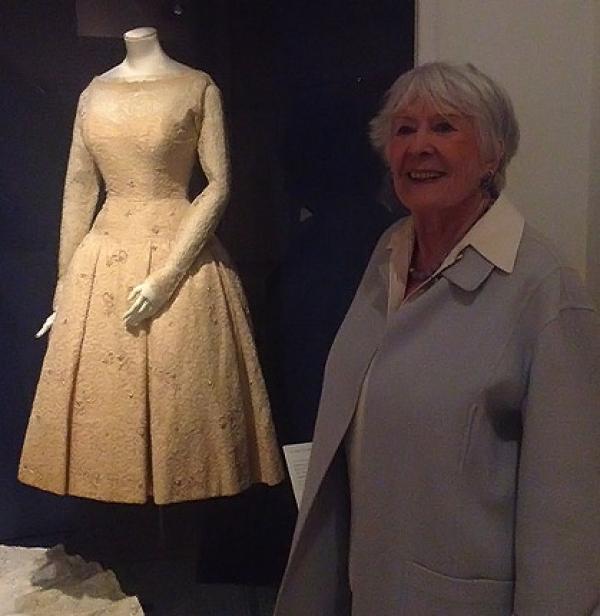