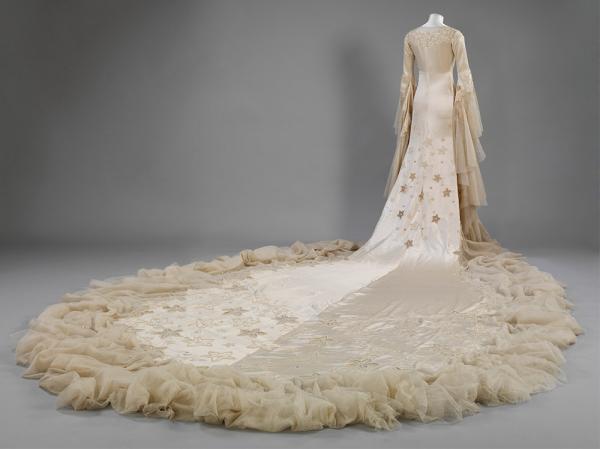 Among the star objects in Wedding Dresses 1775-2014 is this stunning dress was worn by the acclaimed society beauty and gossip columnists’ favourite Margaret Whigham, for her 1933 wedding to Charles Sweeny. Their wedding took place on February 21st 1933 at Brompton Oratory, London, and crowds of people gathered to catch a glimpse of the dazzling bride and groom.

So large was this crowd, that traffic as far as Hyde Park was brought to a halt, as can be seen in the newsreel on the British Pathe website.

The dress, designed by Norman Hartnell, who was then beginning to make a name for himself as the dressmaker of choice amongst London’s youthful society debutantes, is made from ivory satin, and appliquéd with orange blossoms, outlined with faux pearls and bugle beads.

The really impressive design feature of the dress however, is its integral train, which is not only 3.70 metres long and 2 metres wide, but also embellished with extensive beading and a wide border of tulle. And it was this train that presented the real challenge for the conservation team, who had to ensure the dress could be securely packed, with its train, in such a way that would prevent damage, stress and strain while the object travelled around the world. 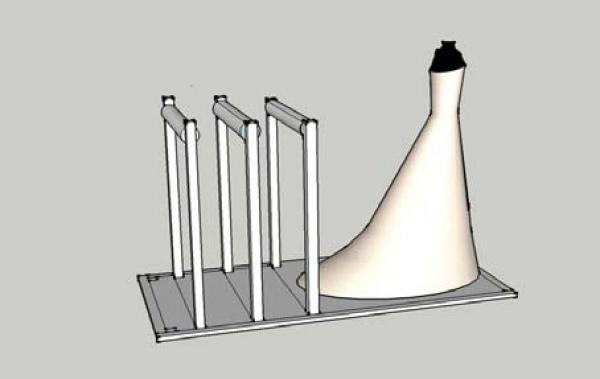 Working alongside the Technical Services Team, it was decided that a frame should be built over which the train could be draped without becoming crushed or strained. Several sketches were made of designs for this frame and we eventually chose what has informally become known as the ‘toast-rack’ design. This allows the dress to be packed in a crate 1800mm high, 1100mm deep and 1950mm wide. Any larger and there would be a danger that the crate might not fit through the doors of the borrowing institutions!

The wooden frame you can see here is covered with Corex™ and Plastazote™ and permanently attached to a board which slides in and out of the crate with the help of a pallet truck. The mannequin is then positioned onto this board and secured in place with wooden blocks at the base, while a bracket secures the mannequin by the neck. 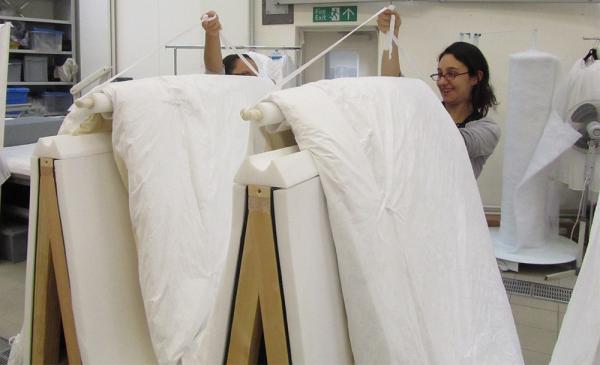 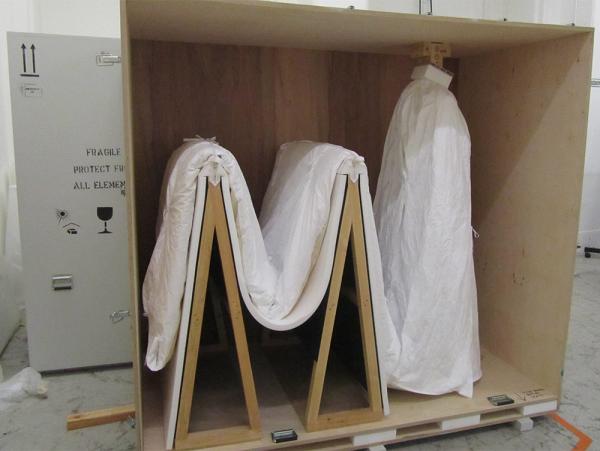 As well as the frame, soft packing was made to further protect the object, which is something we do for all touring costumes:

Part way through this process, the dress made its way to the photography studio in preparation for the exhibition publication. From the image, it is possible to see how many people were required to move it safely; however with the packing completed, the number of people required for handling was reduced from seven to only three. 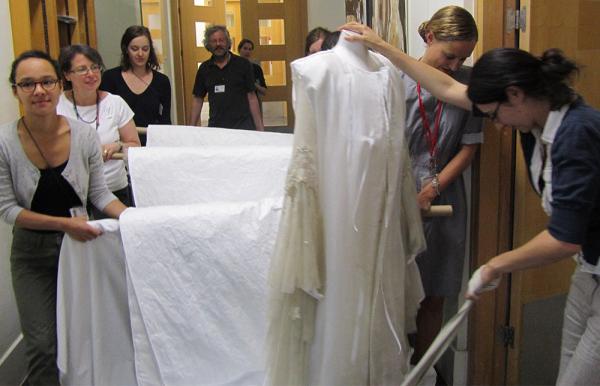 Even so, the unpacking of this dress caused quite a stir at each and every venue. Below you can see video footage of us unpacking the dress in front of press at The Museum of New Zealand Te Papa Tongarewa:

and ABC Central news coverage of the unveiling for the Bendigo Art Gallery in Australia, as well as hearing a bit more about the other fabulous objects in the exhibition.

This might also be a good point to direct you to the wonderful blog written by Claire Regnault, Curator of History at Te Papa, which charts the installation of the exhibition in New Zealand and highlights some of the stars of the show, including Margaret Whigham and her ‘toast rack’, of course!