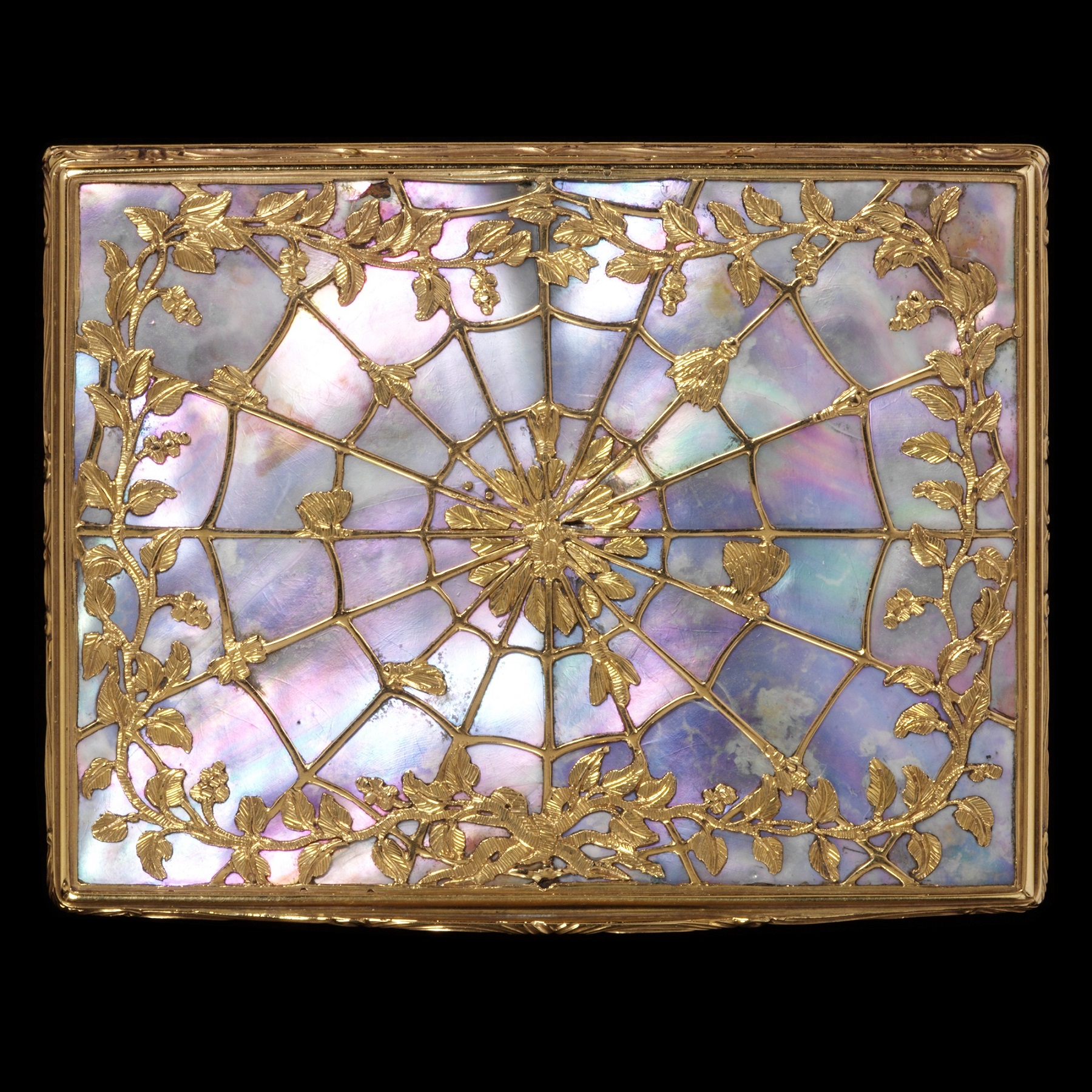 The Gilbert Collection was formed by an American Englishman, Arthur Gilbert, who loved to tell the stories behind his treasures. Here are two eighteenth-century masterpieces which Arthur Gilbert might have shown his guests on a dark and stormy Halloween night. Are you sitting comfortably?

This intricate mother-of-pearl box is an unmissable Halloween piece: the golden strips forming the spider web can be felt when handling the box. Delicate golden flies are caught in the net, but the spider is nowhere to be seen.

The box was made in Paris in the mid-18th century, when Halloween was not celebrated in France. It is possibly the only eighteenth-century snuffbox depicting a spider web. The image might go back to the myth of Arachne, a fabled weaver: she challenged the Greek goddess of handicraft Athena to a weaving contest. The mortal girl won with a work depicting the Infidelities of the Gods – presumably including those of Athena’s father, the god Zeus.  According to Ovid’s Metamorphoses the goddess turned Arachne into a spider, leaving her and her descendants condemned to weave forever.  When the box was made the spider web had become a symbol of the virtue of industriousness and the craft of weaving.

This snuffbox has been part of the V&A’s own collection of gold boxes since 1917 and Arthur Gilbert, born in London in 1913, will have seen it on his numerous visits to the Museum. And so can you: it is on display in the Jewellery Galleries (room 91M).

The tazza of the Lady of Schönaich

“In memory of lady Eva Schönaich, née Burghaus, a mother of seven children, her two surviving sons, Hanns and Sebastian […] had this  made * in the year 1619 *”, translates the black enamel inscription around the rim of this golden tazza.

The Schönaichs were a family with estates in Silesia, today part of Poland. Like many noble families in this part of Europe, they became Protestant during the 16th century. Sebastian’s diaries show that during the 1620s he travelled across Europe and even stayed in London. In contrast, not much is known about this woman who died just a year into one of the most traumatic conflicts of early modern times: the Thirty Years’ War (1618-1648). The fact that this marvellous piece was created in her memory is highly unusual, and shows her sons determination to preserve her memory. Early November being a time of remembrance, is the right moment to showcase this sophisticated treasure in a blog.

The tazza is currently on display in the Whiteley Silver Galleries (room 66).

A golden cup from the bottom of the sea

The survival of this gold cup stems from utter tragedy: it was part of the haul of a ship of the so-called bullion fleet of Spanish King Felipe V. It was probably on board the Santo Cristo de San Roman which sank off the coast of Florida during a terrible hurricane in July 1715.

The vessel was heavily armed and, according to the surviving manifesto, held 53 chests of worked silver and 85 chests of gifts, alongside gold coins and 48 chests filled with vanilla beans, liquid amber and even chocolate. Twelve ships perished during the storm, and over 700 sailors with them. Only in 1985 was the wreck discovered and this bowl lifted from the sea. Made of gold, it withstood the elements. Most of the silver is thought to have been worn away by the waves. Its surface, though, has taken on a soft matte shine.

This object will be back on display in 2016 in the Rosalinde and Arthur Gilbert Galleries.