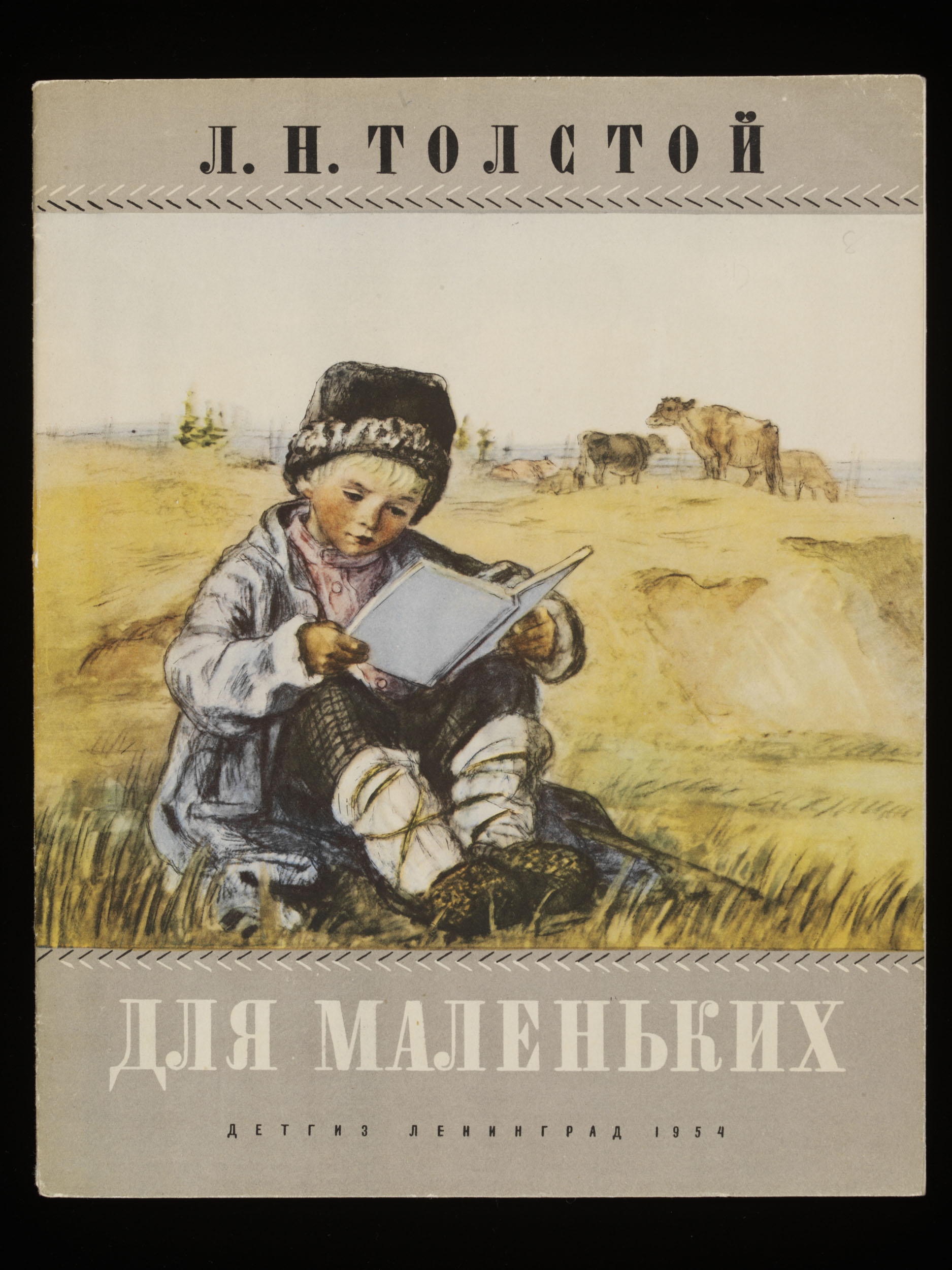 The nation is gripped by the BBC’s adaptation of Tolstoy’s epic novel ‘War and Peace’. For some this is their first introduction to the work of Tolstoy but for Russian children he is one of the first authors they meet, through the many stories and educational books he wrote for them.

Although born into an aristocratic family, Tolstoy (1828-1910) was concerned with the lives of Russian peasants, the majority of whom were illiterate agricultural workers, legally the property of landowners until the peasants were liberated from serfdom in 1861. Tolstoy set up a school at Yasnaya Polyana, his estate, in 1859 to offer elementary education to the children of the peasants on his land. In the 1870s and 1880s, now with children of his own, he created an ABC book and books of stories for children. These were soon used in schools throughout Russia, and continue to be popular today.

One of Tolstoy’s most loved stories was his retelling of the fairy tale ‘Goldilocks and the Three Bears’. He references the English story of the three bears in ‘Anna Karenina’ (referring to the three Shcherbatsky sisters) which he wrote in 1875, the same year he published his own version of the Goldilocks story. Tolstoy’s story is titled ‘The Three Bears’, and the girl intruder is not named. The bears however are furnished with the Russian names Mikhail Ivanovich, Natasha Petrovna and little Mishutka. You can see them asking who (‘kto’ in Russian) has been on their chairs and beds, in roaring upper case script on this page: The girl has been interpreted as a Napoleon figure, invading and wrecking the home of the good Russian bears, but ultimately being beaten back as Napoleon was in 1812. The story was also popular in Soviet times where mistrust of outsiders was encouraged.

Cautionary tales are used to discourage bad behaviour in children, and encourage good. In this story a girl picking mushrooms (a favourite Russian pastime) narrowly escapes an oncoming train.

Trains were a relatively new feature in Russia. The line nearest to Yasnaya Polyana was built in the 1860s. Tolstoy was both intrigued by them and saw them as an intrusion into the unspoiled countryside.

Tolstoy also wrote versions of other stories from around the world, especially Aesop’s Fables. Here you can see the clever Jackdaw who drops stones into a jar to drink water, and the stupid dog who loses his bone by dropping it in the water after barking at his reflection. The stories have been shortened (and this may come as a surprise to readers of ‘War & Peace’) as Tolstoy aimed for his works for children to have brevity and simplicity.

Tolstoy’s children’s stories were a staple of early education in Soviet times, especially those that promoted hard work or loyal behaviour. Some of his stories were edited to fit Soviet mores and others ignored completely; for instance, ‘God Sees The Truth But Waits’, his children’s story of a wrongly jailed man finding solace in prayer, was not on the curriculum.

Tolstoy believed in the power of reading and education to change lives. It was not just to be used, it was to be enjoyed. The motto of his school was ‘enter and leave freely’. In this story book for younger children we see Tanya playing at teaching her doll to read (probably using a similar book to Tolstoy’s own ABC “Azbuka”), and Nastya reading aloud to her proud mother after school.

Tolstoy was proud his books were, in his own words, “used to teach generations of all Russian children, from the csar’s to the peasant’s…”. All of the books mentioned above are freely available in the National Art Library, whether you are a prince or a pauper.
NAL National Art Library

Very enjoyable on Tolstoy. You forgot to mention he was mixed race, quite a topic for the modern day, and never talked about during his lifetime, one of his great grandfathers was I believe, african.
Interesting the Russian word for bear! I’d completely forgot that!

I’m glad that you enjoyed the blog.

I know that Pushkin had a African great-grandfather, Abram Petrovich Gannibal. Pushkin started to write his biography but I think it was unfinished when Pushkin died, although may have been published later. I believe Tolstoy was descended pretty much exclusively from Russian aristocracy, but I may be wrong.

Many thanks for your comment. Russian history and literature is endlessly fascinating.

Enjoyed the blog
Do you know if is possible to buy a copy of Tolstoy’s alphabet? either in russian or better still translated into english