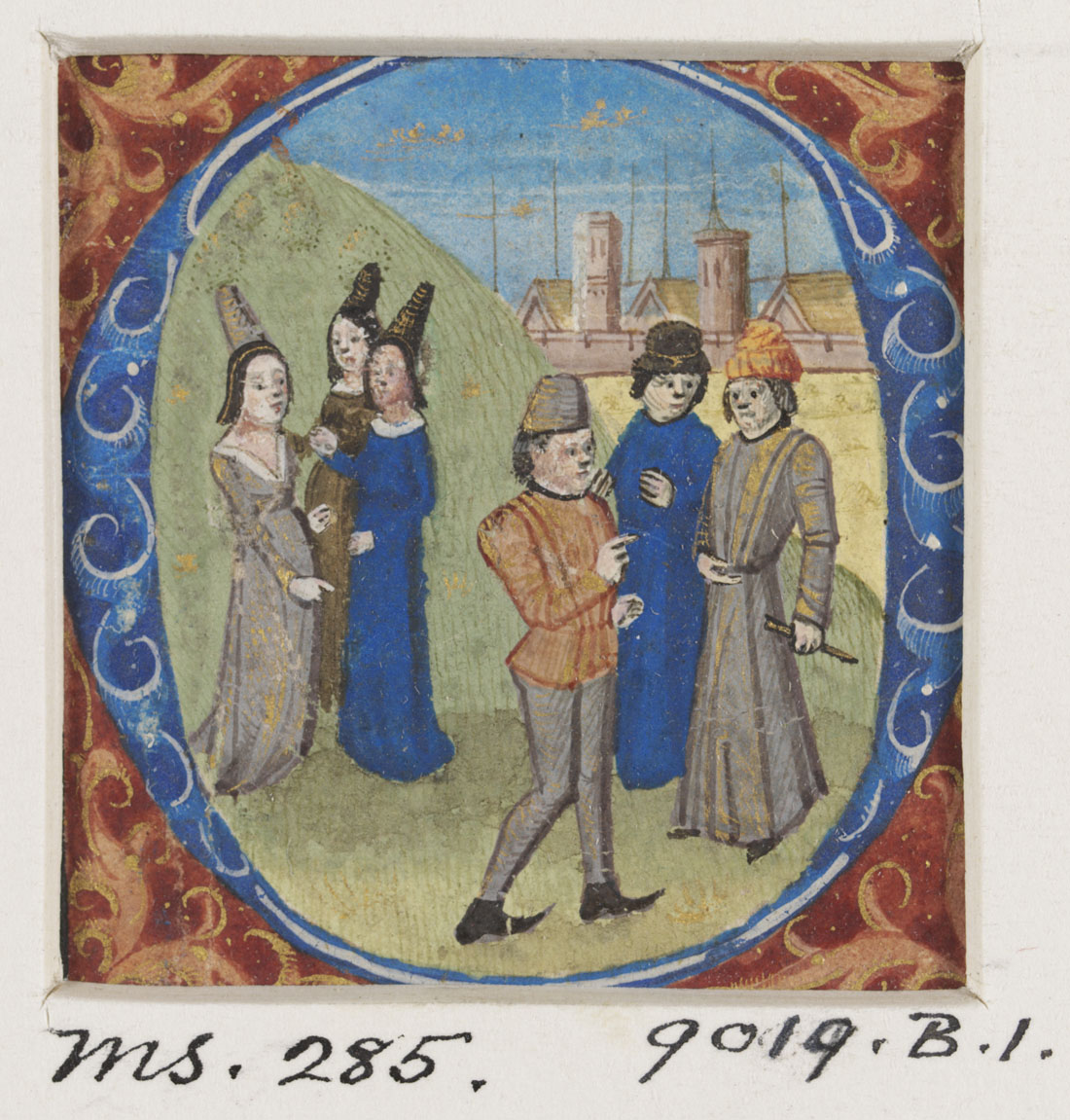 The V&A’s new Shoes exhibition showcases some of the craziest trends in footwear throughout history. One of my favourites is this extremely long-toed Medieval shoe from the Museum of London.

In my previous post about ostentatious medieval headdresses I wrote about using manuscripts as a source for images of clothing, so couldn’t resist having a look for these types of shoes to see how they were presented in contemporary images. Manuscript images of biblical figures often show them barefoot or wearing sandals, but there are some characters depicted wearing the long-toed pointed shoes. In this leaf from an antiphoner (a type of choir book), you can see a bare toe peeping out from the bottom of the robe of one of the disciples whereas the king has his foot resting on his knee so you can see his pointed shoes.

Pointed shoes were popular from the 12th century. It has been suggested that they were a fashion inspired by the new Gothic architectural style that saw churches designed with windows and roofs with long pointed shapes. Another origin myth claims that Fulk of Anjou (ca. 1089 – 1143) was responsible for the design, apparently to hide some sort of foot deformity. Fulk’s position of King of Jerusalem from 1131 gives us another possible inspiration behind these long-toed shoes – the oriental slipper that would have been seen by crusading knights in the 11th and 12th centuries. In 14th century England, these long-toed shoes were called poulaines or crackowes after the influence of Richard II’s Polish wife Anne of Bohemia (1366-1394), who presided upon a court where fashion became extravagant from head to toe. In manuscript illustrations, such as the one below, it is common to see a long-toed shoe extend over the border of an image, emphasising its shape and length.

Whatever their origin, they were very popular for several centuries during the middle ages. They reached their most extreme in the late 14th and into the 15th century with toes up to 24 inches long. Toes could be stuffed with moss, wool, hair or grass, or supported with whalebone to keep their shape. The young man in this image combines his pointed shoes with a fashionable short tunic.

Needless to say, there was opposition to these fun but impractical items of fashion. They were decried by the Church as sinful for their phallic shape, however records exist of errant clergy flaunting long-toed shoes. Their impracticality was seen as leading to laziness or incapacity. Long toes were sometimes cut off shoes before a man could go into battle. They were also thought to be too showy to be modest or decent. Rulers were keen to control the wearing of such items, with laws limiting toe length by social class, with the longest toes going to the nobility.

As ever, fashions change, and at the end of the 15th century it swung full circle and short, square toes (or cow’s hoof shaped) were now the in thing, as worn by the bridegroom in this image of a marriage.

If you would like to see examples of both these types of shoes step off the page, then visit the V&A’s Shoes exhibition which is open until 31 January 2016.

Dear Sir /madam ,
It is glad to write to you with keen hope to open a business relationship with you.I obtained your company name and email address from the Internet.
Our company is a factory specialized in all kinds of MEDIEVAL , CIVIL WAR SHOES and CAPS in SIALKOT PAKISTAN. Our products have good quality and competitive price.
For more information, we would like to let you know our company web site (www.mantharpak.com ) .Hope to hear good news from you.
Sincerely Yours,
http://www.mantharpak.com
Muhammad Mushtaq

It is glad to write to you with keen hope to open a business relationship with you for new year (2016 ). I obtained your company name and email address from the Internet. Our company is a factory specialized in kinds of MEDIEVAL SHOES,WW1 SHOES, WW2 SHOES , CIVIL WAR SHOES and CAPS.

Our products have good quality and competitive price. For more information, we would like to let you visit our company web site (www.mantharpak.com ) . Hope to hear good news from you.We want business relation with you.