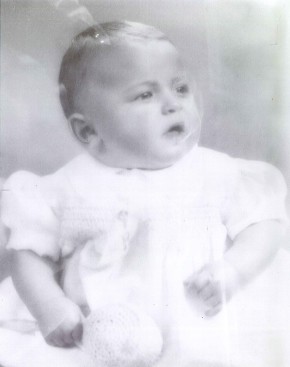 Arthur Gilbert was born in 1913 and grew up in North London in the first half of the twentieth century.

Golders Green, where Arthur lived with his family, was home to a large amount of Jews of Eastern European and Russian origin, as indeed it still is today. Bustling kosher butchers, bakers and cafes abound and, at this time of year, there is a particularly festive atmosphere. For today, Monday 14 December 2015, or 2 Tevet 5776 in the Hebrew calendar, is the last day of Hanukkah. At dusk tonight, the Jewish ‘Festival of Lights’ will be over for another year. Last night, Jews all around the world will have lit the final candle in the Hanukkah menorah, or candelabrum, and witnessed all eight lamps and the shammash, or servant lamp, glowing together in a ritual that has been observed for many centuries by Jews of all denominations, all over the world.

In the V&A’s collections are several menorahs that were made at different times in different places. However they are all unified by the presence of eight individual lamps and at least one shammash, which is lit first and then used to light the other lamps. Indeed, the eight lamps of the menorah are highly symbolic, reminding Jews of the miracle that occurred upon the rededication of the Second Temple in Jerusalem in 168 BCE.

Here is an example of an Italian Hanukkah menorah, made sometime during the late sixteenth or early seventeenth centuries:

This object celebrates two distinct Jewish heroes: Judah Maccabee, the hero of the Hanukkah story, and Judith, the heroine of the Book of Judith. Both are celebrated as freedom fighters who, against enormous odds, liberated the Jews from their oppressors.

Designed either to be hung on a wall or to remain free standing, it is flanked on either side by lions, which symbolise the tribe of Judah Maccabee:

This example of an English Hanukkah menorah dates from 1747-8:

Made by the London silversmith Jacob Marsh for a family from Gibraltar, this menorah successfully combines beauty with function. For it is wonderfully decorated with scrolls and shells in the fashionable Rococo style of the mid-18th century, yet cleverly comes with a small bucket attached to catch the drips of oil from the lamps.

The scriptural origins of the Hanukkah story are found in Maccabees I and II, where we are told how the Seleucid King Antiochus IV Epiphanes captured Jerusalem, desecrated the Holy Temple, made Judaism illegal and set about forcing Jews to convert to the Hellenistic religion. Against all the odds, the Jews, led by Judah Maccabee, fought back against the large Seleucid army and were victorious. They immediately set about rededicating the holy Temple, hence the name Hanukkah, which means ‘dedication’ in Hebrew. The miracle of the light, and the reason why Hanukkah menorahs have eight lamps, is recorded in the Talmud. It is said that, upon going to light the ner tamid, the eternal light which perpetually burned in the Temple, the Maccabees found enough oil for only one day of light. They immediately sent out a messenger to find more oil and, although this journey took eight full days, the ner tamid miraculously stayed alight for the entire time.

The festival itself is a joyous affair. Over the last eight days, many Jews will have come together with family and friends to light the Hanukkah candles, as well as indulging in the traditional fried fare of doughnuts and latkes. Some might have played a game or two of dreidel, or spinning top, in a quest to win as much Hanukkah gelt as possible – of the real or chocolate variety!

This beautiful dreidel with a rooster finial is in the collections of the Jewish Museum, London:

Perhaps Arthur Gilbert, like so many Jewish children before and after him, would have played dreidel with his family as a young boy in Golders Green? With so much fun to be had, it is no wonder that Hanukkah, with its celebration of light over darkness and freedom over oppression, is one of the most loved festivals in the Jewish calendar.