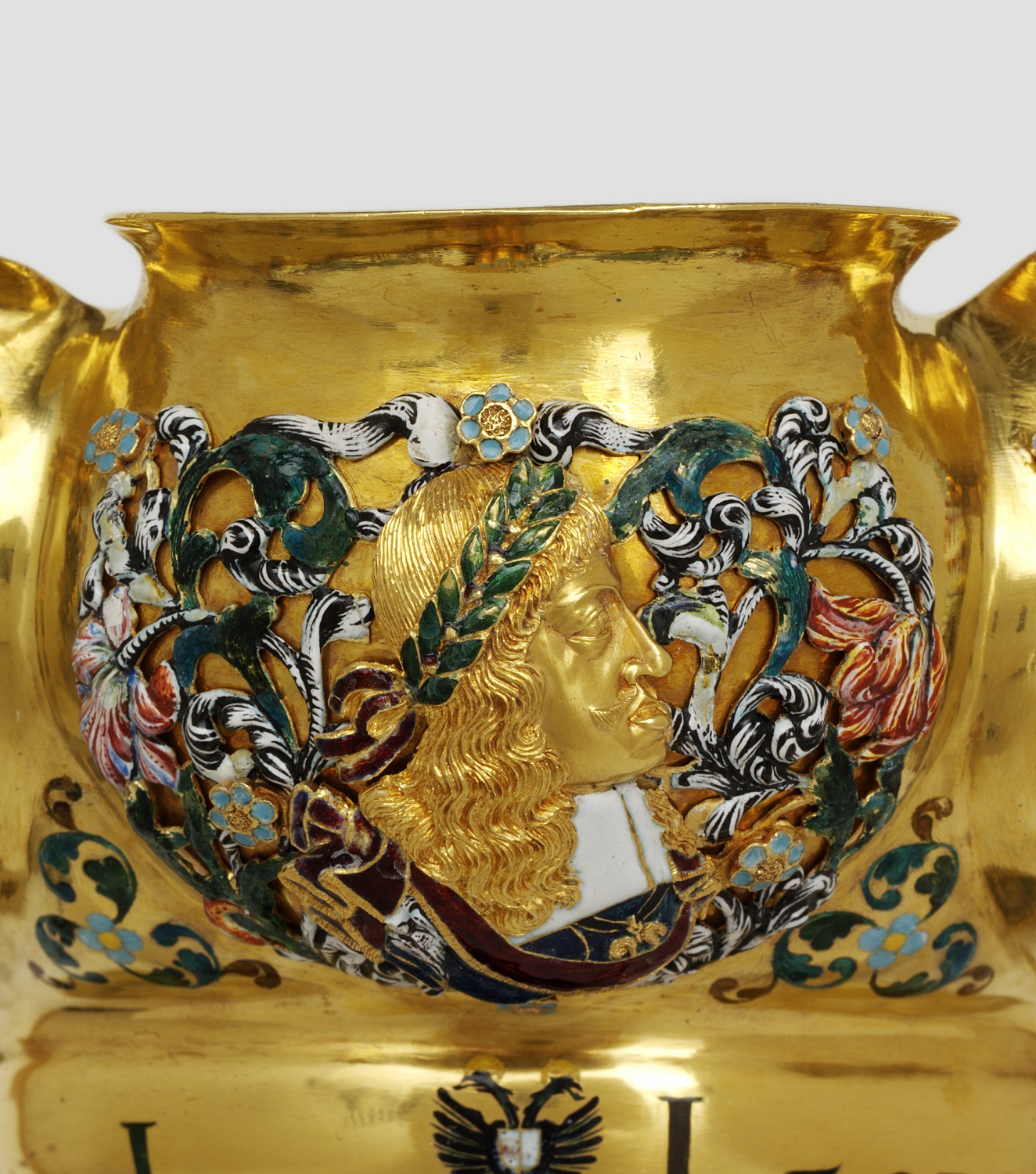 When thinking of the collections of early modern European courts, masterpieces displayed in cabinets of curiosities and treasuries come to mind. In the V&A’s new galleries these appear as eternal treasures, pristine and immutable. But not every work was revered as sacrosanct masterpiece. As one of the highlights in the recently opened V&A Europe 1600-1815 galleries proves, some were given away after undergoing a royal upgrade – a story that seems particularly appropriate at Christmas time.

The gift in question is a richly enamelled and intricately chased seventeenth-century gold cup (follow the link for the complete online record of this piece). When, and under what circumstances the cup entered the imperial collection is not known. Its bowl resembles the shape of a tulip in bloom (or – for the architecturally minded – a miniature dome surprisingly similar to the floor plan of Francesco Borromini’s church San Carlo alle Quattro Fontane, Rome, consecrated around the same time in 1646).

The side of the cup displays a portrait of Leopold I, alongside a Latin inscription which translates as “Long life and prosperity to Emperor Leopold”. Born in 1640, he reigned as Holy Roman Emperor from 1658 to his death in 1705.

Like the portrait of his French counterpart King Louis XIV, the image of Leopold’s face was widely distributed in prints as well as on coins and medals. It became an immediately recognisable symbol of his and his dynasty’s power. On the cup he is shown in profile (note the famous Habsburg lip), crowned with a laurel wreath in the fashion of ancient Roman Emperors.

This profile portrait was added probably around the same time as the enamelled inscription which also includes the date 1665. But what does this mean? It is possible that the slightly earlier gold cup was upgraded as a handy gift to Count Georg Nikolas von Rosenberg (1623-1695) whose coat of arms is enamelled on the foot.

The process of the transformation required the use of the technique of counter enamelling, a layer of white enamel applied to both sides of the surface to avoid distortion to the metal.

This cup is not the only example of a treasure from the imperial Schatzkammer that was re-used as a gift during Leopold’s reign. An early seventeenth-century gold cup, today in the collections of the princely Eszterházy family  underwent similar treatment when it was selected as an official gift from Leopold I in the 1660s: another instance of royal, even imperial recycling.

This cup is on display in room 6, The Cabinet.

(All images: The Rosalinde and Arthur Gilbert Collection on loan to the Victoria and Albert Museum)