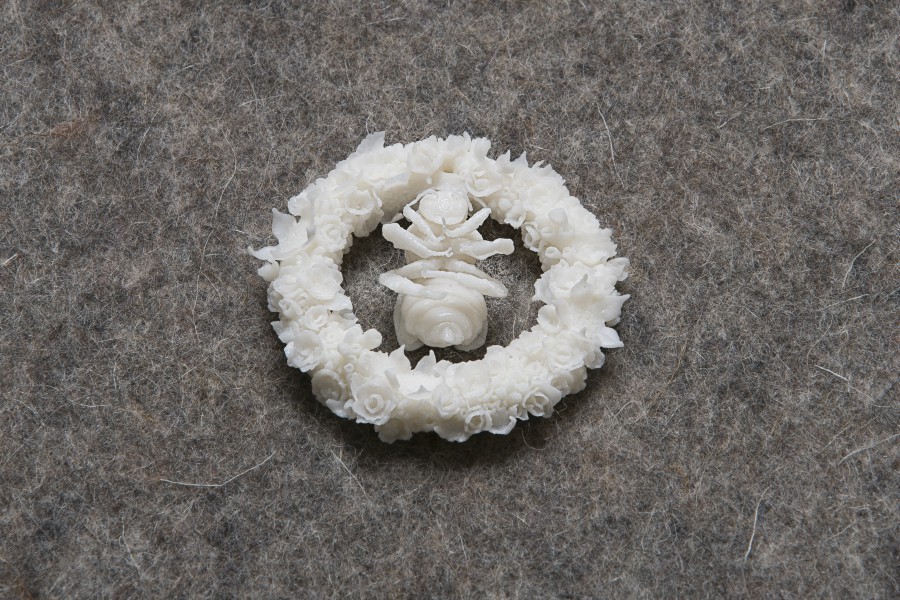 Sam Bakewell is our current Ceramics Resident who started his residency in October 2018. I caught up with Sam to hear about his plans for the residency.

What interests you about the V&A?

The sheer breadth of objects held in the collections, along with the quality of craftsmanship has always kept me coming back to the V&A over the years. These are not always positive reasons! There are things here that infuriate me by their pomposity, and things that have a presence that genuinely confuses me, alongside things that more ordinarily captivating and leave me a bit breathless. But whatever the reason, there are more objects here, with interesting stories and makers lives behind them than other museums and galleries. It is these stories that have burrowed in my head and left me always wanting more.

I think there’s something here too about being able to feel lost and alone with individual objects despite on occasion being surrounded by other visitors. I think that’s pretty unique and hard to rationalize. I can always find space here if I need it.

What area of the collection are you interested in?

I’ve been shamelessly using the V&A as a direct source of inspiration, if not for out-and-out copying for years when I’ve had periods of struggling with making. I think its impossible to spend a decent amount of time here and not feel compelled to want to get back to the studio and manifest something half-seen and mis-remembered. As such, it was almost impossible to choose one area to concentrate a residency around, but the pottery of the Martin Brothers was kind of a no-brainer. There’s just something totally otherworldly about the things they made that really borders on something of the occult to me. I kind of forget what I’m doing or looking at even when I’m with them. They just get me excited!

The magnetism and sentience in their work possesses lies mainly in the madness and drive behind the Brothers themselves. They had a tendency to hoard the best pieces under the floor of the shop in Fulham which was only revealed upon its razing to the ground. This places them in a lineage of outsider artists making beyond commercial sense and for their own personal needs. The brothers’ figurines, bowls and vases covered with sinister birds, and grotesque sea creatures convey more than just a comical style. I want to concentrate on the dark nature of the work and its links to the gothic romanticism of the 1900’s, but also the idea of mental health and ‘madness’ and its role in creativity.

Central to this would be depictions of Anthropomorphism; bestial traits in human form or human characteristics in animal guise, and in particular the role the Owl as a metaphor for melancholy, intelligence, insanity and death throughout art history.

As well as the Martin Brothers from the Ceramics galleries I would also like to research Janice Tchalenko’s Seven Deadly Sins, Ruth Barrett-Danes figures on the subservient. And my interests don’t just stop at ceramics but the extensive drawing archive of William De Morgan is of great interest. As would work from the Print, Drawings & Paintings archives; Leonard Baskin’s raptor prints, Aubrey Beardsley’s drawings and prints for Oscar Wilde’s Salome, and the works of Austin Osman Spare, Francisco Goya and William Blake.

And although not in the collections, the films of Jan Svankmajer and the Brothers Quay, and the Chimera’s of the18th century French ceramist Jean Desire Ringel d’Illzach are all on my mind.

Tell me about your practice?

Much of where I’m at now with the things I make revolves around the first experiences I had with clay as a kid, and trying to recreate that same sensation. I grew up in a small village in Somerset, and we had a big garden you could get lost in. My first memories are of hours spent digging up clay in the back corner on my own, making dragons and lizards and monsters, but also making clay kilns when I knew how, so I could crudely fire things too. That was it for me really. My dad put me on an adult evening course with him when I was around 8, and I just followed whatever path meant I could keep using clay, be that GCSE Art, A level, Foundation, BA and then MA.

I never cared as much about ceramics as such, more the enormous capacity clay had to communicate through is malleability, and still don’t care like a hardcore potter might. But the education and technical skilled side of that has inevitably woven its way around the thoughts and feelings involved, till it strangle-hold’s it sometimes. Amongst that the threads of recurrent themes and images that keep rearing their head to me seem concerned with the premise of universal Archetypal forms that seem very much based in the collective human experience. It just happens to be that these are also deeply imbedded in the varying Iconography of religious belief systems. As I’ve gone on making and questioning the reasons why I make, and the validity or often pointless nature of art, the belief in myself and in making in the face of desire not too, has become something of a driving force in itself.

But much of my time is spent trying to undo the learned, skilled portion of myself, to get back to the childhood connection I felt digging clay from the ground; an almost trance-like state of direct communion with all the darker, more honest parts of my head.

If you would like to visit Sam in his studio come to one of his open studios, where you can drop-in and see his research and work in progress. Or check out his Instagram where he focuses on some of his favourite objects in our collections.

The magnetism and sentience in their work possesses lies mainly in the madness and drive behind the Brothers themselves!