Daphne Christoforou’s ‘No Thing’ was the first textile illustration to win a V&A Illustration Award. Her illustration draws on a fascination with ancient South-East Asian artwork and symbolism. ‘No Thing’ depicts the Buddhist concept of Perfection: a state of mind represented by the central figure of the white elephant and achieved only by banishing the emotional states – attachment, boredom, fear and pain – that congest the mind and obscure its clarity. 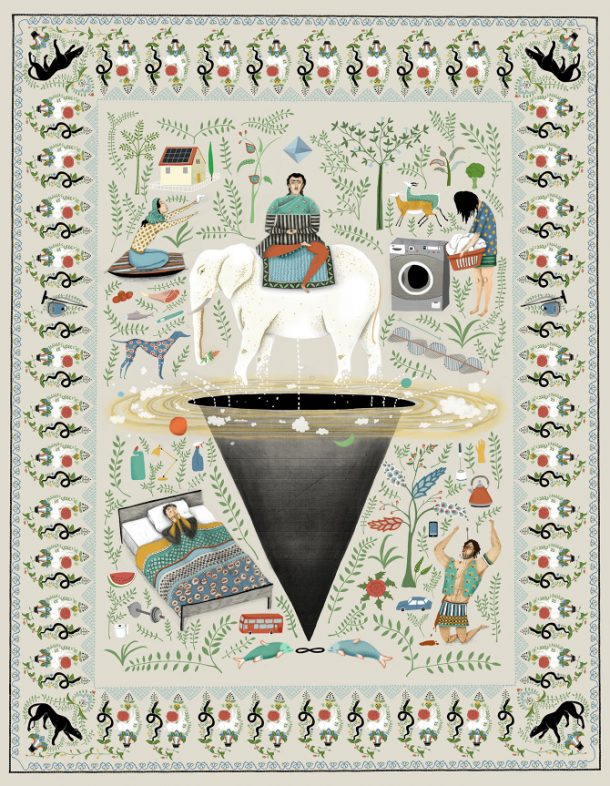 Successfully combining pen and mouse, Daphne’s initial pencil sketches were coloured and edited in Photoshop, then printed on fabric to create a distinctly modern form of textile image-making.  ‘No Thing’ has achieved an Adobe Achievement Award with Daphne picking up a Grand Prize in the Traditional Media Segment. 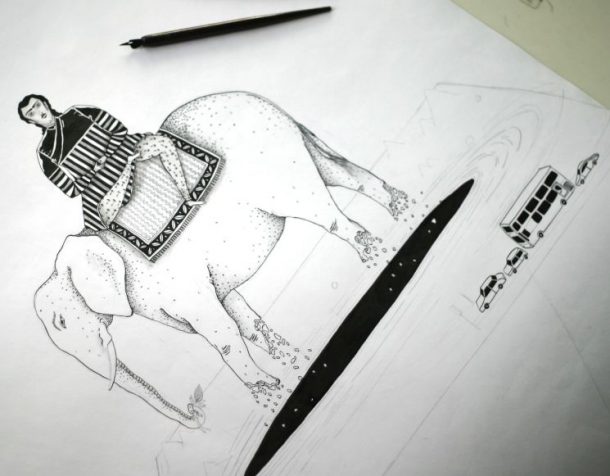 Since completing her studies at the Royal College of Art, Daphne has returned to her home country of Cyprus and continues to work on a range of self-initiated and commissioned projects. As we prepare to open the 2020 Awards to entries next week, I caught up with Daphne to find out more about her work and how it felt to win the coveted student award.

What made you want to become an illustrator? 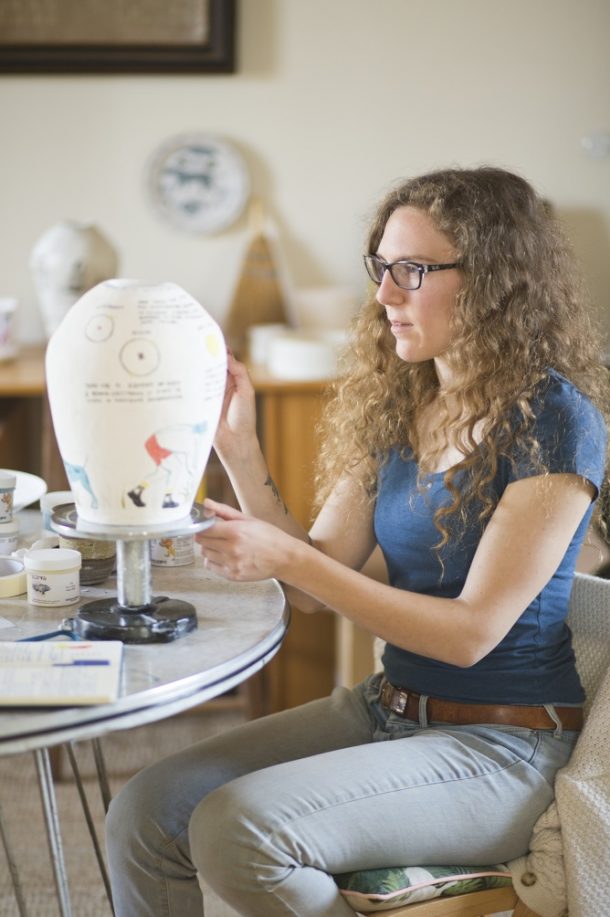 Initially illustration as a career did not intrigue me, I was averted by tight deadlines and clients dominating the creative process – which is often the case with this particular practice. However, I was exceptionally drawn to another of its fundamental aspects: the challenge of finding a balance between satisfying my artistic longing while at the same time producing a piece that is understood by individuals other than myself.

Illustration’s main goal is to make sense to the viewer, which pushes the artist to solve the difficult enigma of: visually communicating a complex notion using mostly drawing (in my case), often in conjunction with text.

I believe that studying illustration has equipped me with some valuable tools, which enable me to reach out to others through my work.

It is particularly rewarding when people identify their own worries, thoughts, opinions and limitations in my art pieces. Illustration has allowed me to share my ideas and sensitivities, which often lifts feelings of isolation and offers a sense of relief and connection. This is the ultimate gift illustration has to offer and the reason it has such a central role in my work.

How did it feel to win the V&A Illustration Awards?

The moment I received the email with the surprising news that I was the winner is still vivid in my mind. I was in bed, my nerves were overwrought by ceaseless MA-related work and I decided to take a short break in order to avoid a burn out. After reading the email I was in disbelief, the weight of the award is such that I did not deem myself worthy of winning it.

It wasn’t until after the ceremony that it felt real and its welcome effects took shape. The winning piece was based solely on my own inclinations and fascinations and to receive such a major award for it was indisputably encouraging and reassuring.

It allowed me to pursue my personal work while knowing that it is appreciated and valued by others.

What projects and commissions have you been working on since winning the Award?

For the first two years after winning the Award I worked on a variety of projects; from illustrating a wrapping paper with flora from the Yunnan mountain for a high-end Chinese tea company to hand-building and decorating gallery-based ceramics for Collect fair at the Saatchi gallery.

In the end I decided to focus on self-initiated ceramic pieces as these were the most fulfilling, while also making smaller work in between projects. I am considering making another textile piece eventually such as the award-winning one as I haven’t produced another one ever since.

Why should student illustrators enter the V&A Illustration Awards?

I would encourage students to enter because not only does the award adds to one’s credibility and offer a pleasant financial injection, but also is exceedingly easy to enter and upload work. There is no theme restriction and one can enter any piece of their choice for free. Unlike a lot of illustration competitions out there with complicated, time-consuming entering procedures, artwork limitations and almost non-existent benefits, the V&A Illustration Awards offer a highly valued prize with minimum effort on behalf of the entrant.

To simply put it one has nothing to loose by entering and potentially a lot to gain!

See more images of Daphne’s ceramics and textile illustrations on her website at www.feelondemand.com

The V&A Illustration Awards 2020 will open to entries on Monday 21 October at 14:00. Visit the Awards website for further information www.vam.ac.uk/info/va-illustration-awards