Over the last few months we have been working hard at Blythe House to prepare the National Art Library’s Children’s Literature collections for their move to the new Collections Resource Centre in Stratford. Comprising nearly 100,000 books, the collection ranges from 16th century chap-books and Soviet children’s literature to more recent acquisitions relating to childhood today. It represents many artists of ‘The Golden Age of Illustration’ (1880s – 1920s) and, browsing the shelves of the collection, I became intrigued by ‘The Allies’ Fairy Book’ illustrated by Arthur Rackhamand Edmund Dulac’s Fairy Book: Fairy Tales of the Allied Nations, both published during the First World War. These two books tie together magical folklore with very real historical and political events, circling themes of nationalism and peace.

Arthur Rackham is well known as one of the foremost illustrators of the period. His first success came from working on a volume of Fairy Tales by the Brothers Grimm, first issued in 1900. In these early illustrations, Rackham developed his fantastical style, his work showing influences ranging from Dürer and German Romanticism to Aubrey Beardsley and Art Nouveau (Once Upon a Time, The Fairy Tale World of Arthur Rackham p. 8). The emergence of Rackham’s talent as an illustrator of fantasy came at a fortunate time for him, as the development of three- or four-colour half tone printing in the 1890s allowed the work of watercolour artists to be reproduced in soft tones that replicated the originals, resulting in illustrations of much higher quality. This, in turn, led to the huge popularity of the expensive illustrated gift book, which enabled Rackham and Dulac to become some of the most successful illustrators of their generation (A Treasury of the Great Children’s Book Illustrators p. 162). An example of an Arthur Rackham gift book is currently in our display Making an Impression: The Art of Relief Printmaking, on display in Room 88A at the V&A until 13 September 2020).

However, in the 20th century the golden age of illustration began to come to an end, triggered by the outbreak of War in 1914, during which increasing constraints on resources led a decrease in quality for illustrated gift books. Rackham commented on this decline – ‘I need not say what a difference the war has made. The market is now divided up amongst stacks of cheaply produced and relatively inexpensive books … the difficulty of bringing out a rather better book is so great as to be all but prohibitive’ (A Treasury of the Great Children’s Book Illustrators p. 172). Indeed, the focus of gift books shifted towards aiding the war effort, and to raise funds many prominent artists in the world of illustration began publishing books such as ‘The Allies Fairy Book’.

The ‘Allies Fairy Book’ was published in 1916 with an introduction by literary critic Edmund Gosse, which explained that a fairy need not describe ‘a small woman with wings’ but rather ‘any supernatural creature which is imagined by people all over the world’ and is seen as ‘people of peace… [for] there is no record of the appearance of fairies upon a battlefield’ (The Allies’ Fairy Book’ illustrated by Arthur Rackham p. 12). However, while fairy tales may seem timeless, this book is inextricably linked to its historical context, intertwining folklore with the rising nationalism of the period. Published to give what Gosse calls ‘national identity’ to each country fighting on the British side during the War, the impetus of the book was to support the propaganda effort and inspire patriotism through folklore. Gosse argues each fairy tale is representative of the culture from which it emerges – the French tales turn simple stories into ‘consummate literary forms’ while the Celtic tales are ‘drowned in a mist’ the likes of which turn ‘the grey of a Hebridean archipelago purple and violet’ (The Allies’ Fairy Book, p. 17). 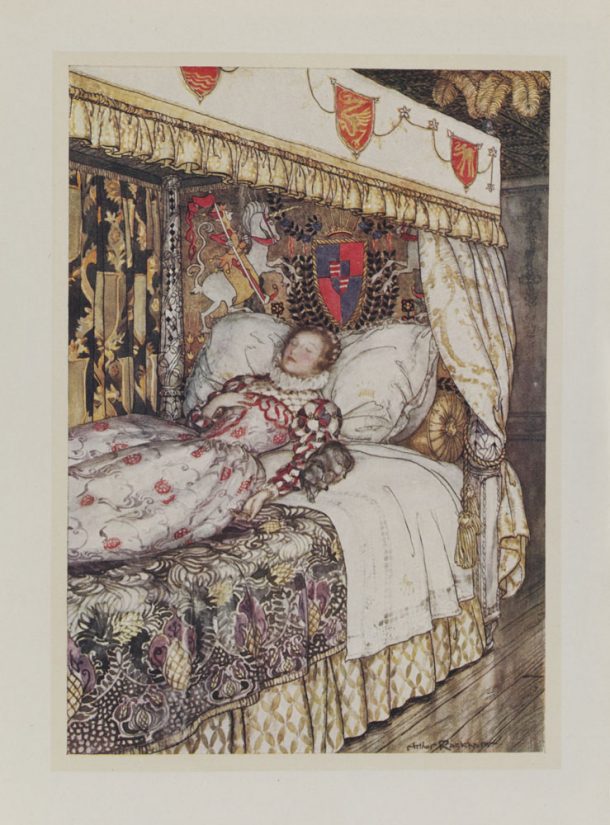 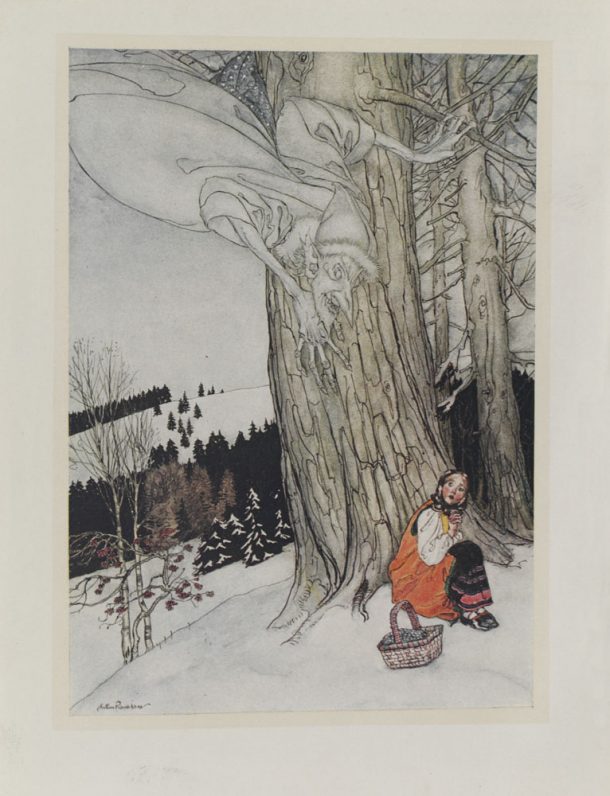 Sleeping Beauty (French) tells the story of a woman who is put to sleep for 100 years by a spindle, before being awakened by her true love; Russian folk tale ‘Frost’ tells the story of a stepmother who marries her daughter off to the winter. Taking pity on her ‘Father Frost’ lets her live, but her sisters perish in the Russian winter, The Allies Fairy Book, illustrated by Arthur Rackham, Hodder and Stoughton, 1916 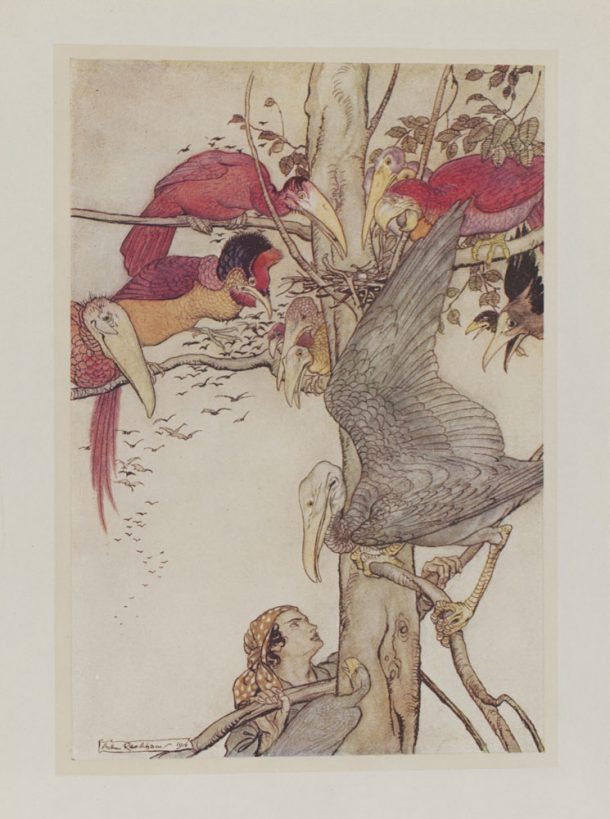 ‘What Came of Picking Flowers’ (Portuguese) tells the story of three sisters who disappear while picking flowers. Their brother begins a search for them using magic boots that take the wearer wherever they wish to go. He finds two of his sisters married to kings who must spend half their lives as an animal and the third imprisoned by an evil man who can never die. Enlisting the help of the cursed kings, he kills the evil man and sets his sister free. The Allies Fairy Book, illustrated by Arthur Rackham, Hodder and Stoughton, 1916

Edmund Dulac, a French expatriate illustrator, was another prominent artist in this golden age of illustration. While both artists painted in watercolour, Rackham’s illustrations were known for their soft colours and characteristic lines while Dulac was preoccupied with ‘pigment and pattern’ (A Treasury of the Great Children’s Book Illustrators p. 177). Dulac’s first major work of illustration was for ‘The Arabian Nights’, published in 1907, which was followed by Sinbad the Sailor and Other Stories from the Arabian Nights in 1914. Like Rackham, Dulac found his commercial opportunities dwindling at the outbreak of war, however respite was found in commissions from the Leicester Galleries to create sets of illustrations for books of fairy tales including ‘The Allied Fairy Book’ (A Treasury of the Great Children’s Book Illustrators p. 190). The book gave Dulac the opportunity to use inspiration from countries across the world in his illustrations, for example in his illustration to Japanese tale ‘Urashima Taro’, where the influence of Japanese art is clear.

Dulac had a particular interest in Persian miniatures, and included many of their themes and bright colours to create a Western fantasy of imagined Eastern worlds. Dulac criticised Western artistic spatial perspective stating that ‘its end result was … nothing less than coloured photography’ and in his illustrations to ‘Fairy Tales of the Allied Nations’, Dulac took influence from Persian miniatures by instead focusing on flat planes and pattern (A Treasury of the Great Children’s Book Illustrators p. 183). While Dulac argued that this way his illustrations required the viewer to use imagination, allowing them to extract the ‘eternal from what is now’, his works were deeply imbibed with the specific historical context of Empire which led to the cultural trend of Orientalism (A Treasury of the Great Children’s Book Illustrators p. 186). 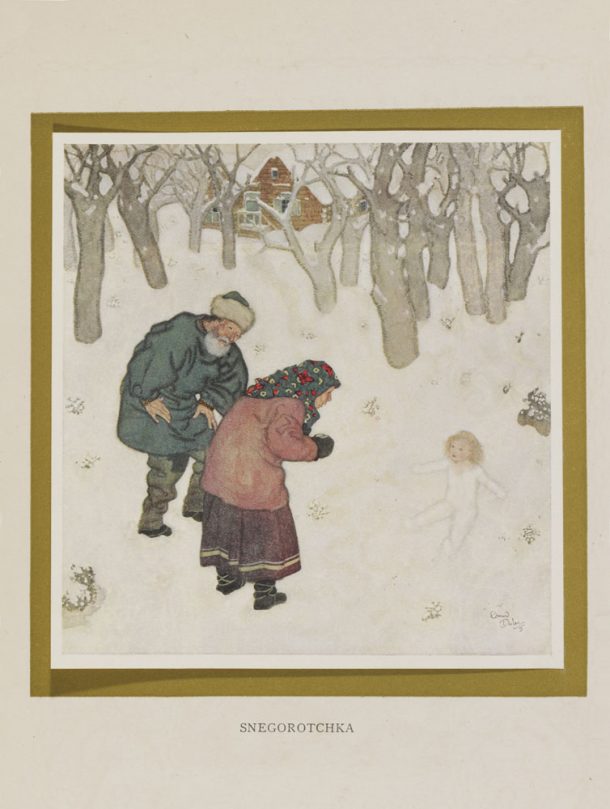 Russian tale ‘Snegorotchka’ tells the story of a childless couple who adopt a child made of snow who melts when the summer returns. Another Russian story ‘The Fire Bird’, tells the tale of a Prince who was prophesised at birth to marry the Maiden of the Dawn. To keep him from his fate, his father imprisons him in a tower but on his fifteenth birthday the prince escapes before flying away on a giant bird to find his princess. Edmund Dulac’s Fairy Book: Fairy Tales of the Allied Nations, Hodder and Stoughton, 1916. Reproduced by permission of Orchard Books, an imprint of Hachette Children’s Group, Carmelite House, 50 Victoria Embankment, London, EC4Y 0DZ 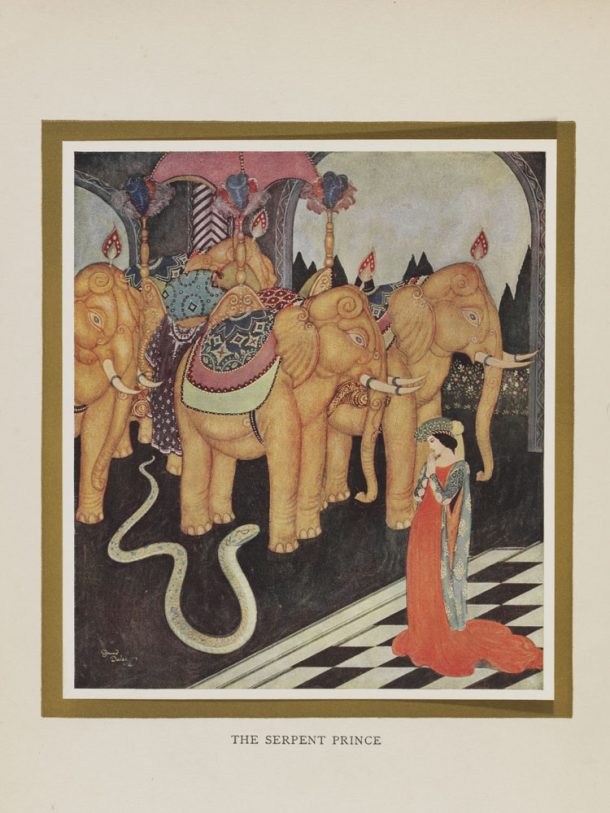 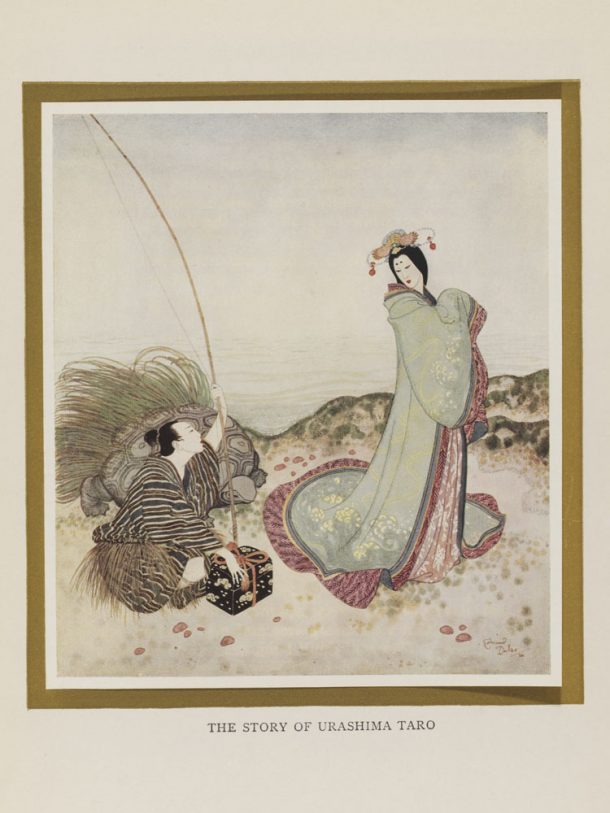 Italian story ‘The Serpent Prince’ tells the tale of a woman who adopts a baby serpent as a son. When the serpent grows up he demands to marry a princess, which the King agrees to in return for the serpent turning his palace into gold. When the serpent succeeds in the task the King allows it to marry his daughter, when it turns into a handsome Prince. In Japanese tale ‘Urashima Taro’ a famous fisherman rescues a tortoise who has washed up on the sand before journeying to magical kingdom under the sea. Edmund Dulac’s Fairy Book: Fairy Tales of the Allied Nations, Hodder and Stoughton, 1916. Reproduced by permission of Orchard Books, an imprint of Hachette Children’s Group, Carmelite House, 50 Victoria Embankment, London, EC4Y 0DZ

While the aim of these books was to provide escapism, themes of suffering reside throughout the tales. The war adds a poignant context to the themes of love and loss, for example in the Belgian tale of ‘Ullenspeigel’, a legendary character whose tales were told in chapbooks from the 13thcentury onwards. A ‘crafty peasant’ stereotype, the character of Ullenspeigal was once popular all over Europe, and was formalised by Belgian novelist Charles de Coster in his 1867 Nationalist novel, which re-imagined Ullenspiegel as a Protestant folk hero fighting oppression from the Spanish during the Dutch War of Independence. In ‘The Allies Fairy Book’, Gosse suggests this oppression pre-figured ‘what Belgium is suffering from now’ (The Allies’ Fairy Book’ p. 21). Thus Ullenspiegel shows how folk tales have been stirring up nationalist spirit since time immemorial, but also how these stories of love and magic overcoming hardship and suffering have been used as a source of hope:

‘Ullenspiegel and his wife, Nele, always young, strong, and beautiful, since love and the spirit of Flanders never grow old, lived peacefully in the Tower of Neere, waiting for the wind of liberty to rise, after so much cruel suffering, and blow upon the land of Belgium … often at night they went up on to the Tower, and seated on the platform they would talk of fierce battles and happy loves past and yet to be… And all those places had been battlefields… ’ – From ‘The Tale of Ullenspiegel’ (The Allies’ Fairy Book p. 113). 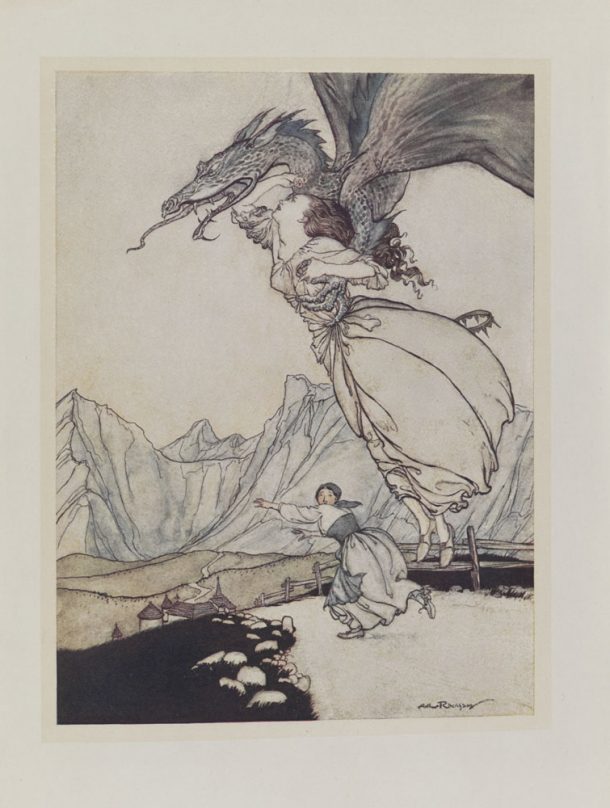 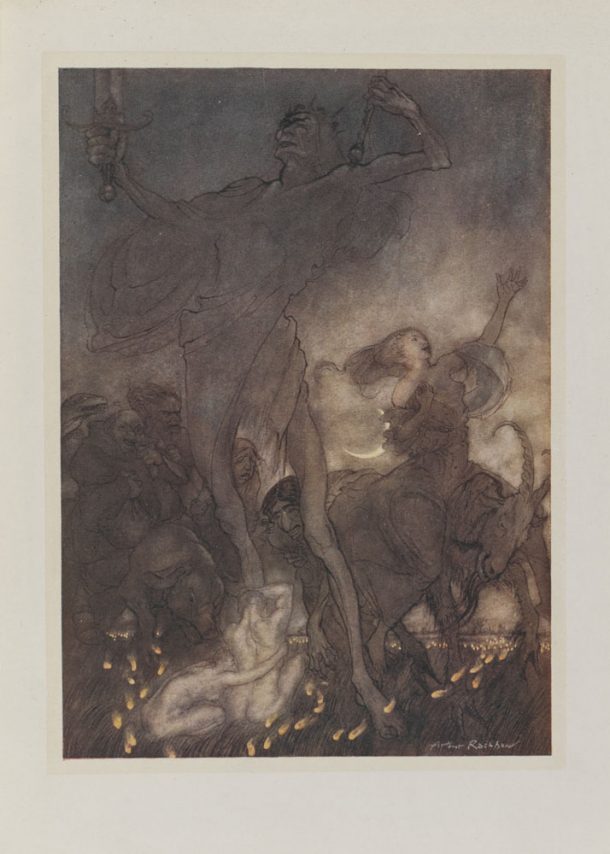 Serbian fairytale‘The Golden Apple-Tree and the nine pea-hens’ tells the story of a young prince who falls in love with a woman who is turned into a pea-hen; ‘The Last Adventure of Ullenspiegel’ (Belgian) tellsof Ullenspiegel’s nighttime interactions with ‘will-o’-the-wisps’ (ghosts) upon the battlefields of Belgium, The Allies Fairy Book, illustrated by Arthur Rackham, Hodder and Stoughton, 1916

To discover more about the world of fairy tales you can explore our rich holdings at Blythe House in the Archive and Library Study Room, and visit our new display featuring Beatrix Potter’s Fairy Land, in the Leighton Corridor, Room 102 at the V&A until November 2020.