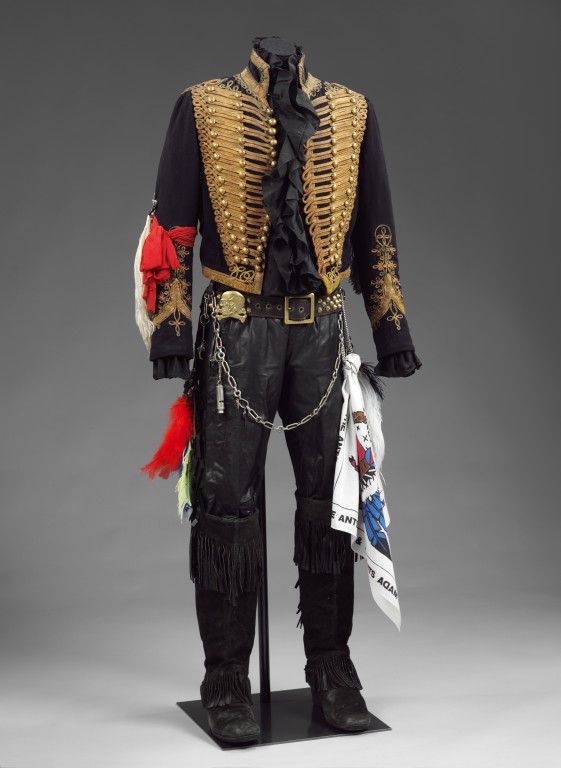 Ahead of Adam Ant’s 2017 “Anthems” tour, Archive Assistant, Lynn Wood, gives an introduction to the Adam Ant costume collection in the V&A Department of Theatre and Performance.

Musically 1980 was a somewhat eclectic year; mainstream pop acts such as Captain and Tennille vied for chart places with punk band The Clash, glam icons Queen and Roxy Music battled it out with reggae and ska legends Bob Marley and The Specials, Hazel O’Connor sang of the apocalypse caused by the rise of the machines, while Diana Ross sang a love song to her piano.

But then out of this musical mayhem could be heard the rhythmic pounding of two perfectly synced drums.

In August 1980 Adam and the Ants released “Kings of the Wild Frontier,” it barely registered in the UK top 50 singles chart, but with the single “Dog Eat Dog” in October the twin Burundi style drumming captured the ears and hearts of the music buying public and it went to the heady heights of no.4.

Okay, so it wasn’t exactly the first time that year that the Burundi drums had been heard, Bow Wow Wow’s “C30, C60, C90 Go” was released in the July, but they were always more style over substance. Adam and the Ants had both style and substance. The music had a hot blooded, beating heart after the introduction of the cold post punk synthesiser bands, and a look that on some might have looked a little strange, on Adam it simply oozed sexuality.

And it’s the look as much as the music that has lasted more than 35 years. That original costume for “Kings of the Wild Frontier”- the jacket of which was worn by David Hemmings in the film The Charge of the Light Brigade- along with many other equally memorable ones were given to the V&A’s Theatre Museum – now the V&A’s Theatre and Performance Department in 1982 and 1984.

In 2007 the costume for “Friend or Foe” featured in the National Maritime Museum’s Sailor Chic exhibition. Adam had been watching the film of “Billy Budd” with Terence Stamp and been interested in the naval costumes – there was no established uniform during the 18th century for most sailors sailor but clothes were often issued to give a sense of uniformity – and so the blue wool jacket with the flesh coloured knotted shirt was born.

The “Kings of the Wild Frontier” costume is currently on display in the British Music Experience exhibition, previously at the O2 arena, Greenwich and since March 2017 at its new home in the Cunard Building, Liverpool.  This is probably the most famous and loved stage costume among Ant fans and the look most associated with Adam. Drawing on Adam’s fascination with Beau Brummell who had served with the 10th Hussars in the 1790s, the military jacket (8th & 11th Hussars) found at Bermans and Nathans costume house, defined the look that spawned a thousand copycats.

Since the opening of the Theatre and Performance galleries at the V&A Museum the “Prince Charming” costume has stood proudly on display. Using the fashions of the time of the French revolution this dashing dandy looks as good today as it did when it first swung from a chandelier.

The collection also includes beautiful frock coats inspired by the film “The Draughtsman’s Contract.” After Adam had sketched out his own designs he asked Sue Blane, costume designer on the film, if she would make them for him. These outfits were used to great effect in the videos for “Strip” and “Puss in Boots,” for which we also have Puss’s outfit and one of the Mice jackets (inspired by the Jets from West Side Story).

We also have costumes for “Apollo 9”, both the video and live performance costumes for “Vive le Rock” and outfits worn by the dancers in the “Rough Stuff” video.

There are well over 200 items, from wigs to boots, highly detailed coats to safety pins, and being just the ‘right age’ I took on the task of trying to make sense of all these pieces.

It started with the innocent line of “I recognise that belt” (braided leather, worn as part of ‘Strip’) and became a labour of love – involving many, many hours watching videos, freeze framing to try and catch a glimpse of a pair of shoes or a belt, reading articles and scouring the internet for pictures – and with input from the man himself and other uberfans it has slowly come together to make up the story of one of the most original acts of the early 1980s.

To find out more about some of the costumes in the Adam Ant collection and other items in the Theatre and Performance Collections visit Search the Collections.

Ah, the memories. I remember Adam when he and his group (with 2 drummers) hit TOTP back in the 80’s. Indeed, he was one of the influences that persuaded me into the entertainment business myself.

I would never have guessed his stage clothes would find their way onto the V&A website and an exhibition.

AS a muso I love the idea that popular music can find a place at the V&A. Loved the David Bowie exhibition and already making plans to visit the Theater galleries again this Summer. Great stuff V&A and thanks for the experience!

Will any of the Adam Ant collection come to the new V&A in Dundee next year? I’m desperate to see Prince Charming and the Apollo9 gear.
I’m sure an exhibition of Theatre and Performance costumes as an opener in Dundee would go down a storm with the public. Fingers crossed.

What a fantastic article by Sabrina ! I’m a lifelong Ants fan, and my favourite look is “Prince Charming”. I, too, hope that these costumes will be brought to Dundee.

It’s just a shame that Marc Bolan’s (T.Rex) costumes can’t be displayed along side his. At the beginning of the 1980’s there was Adam, but before him there was T.Rex !