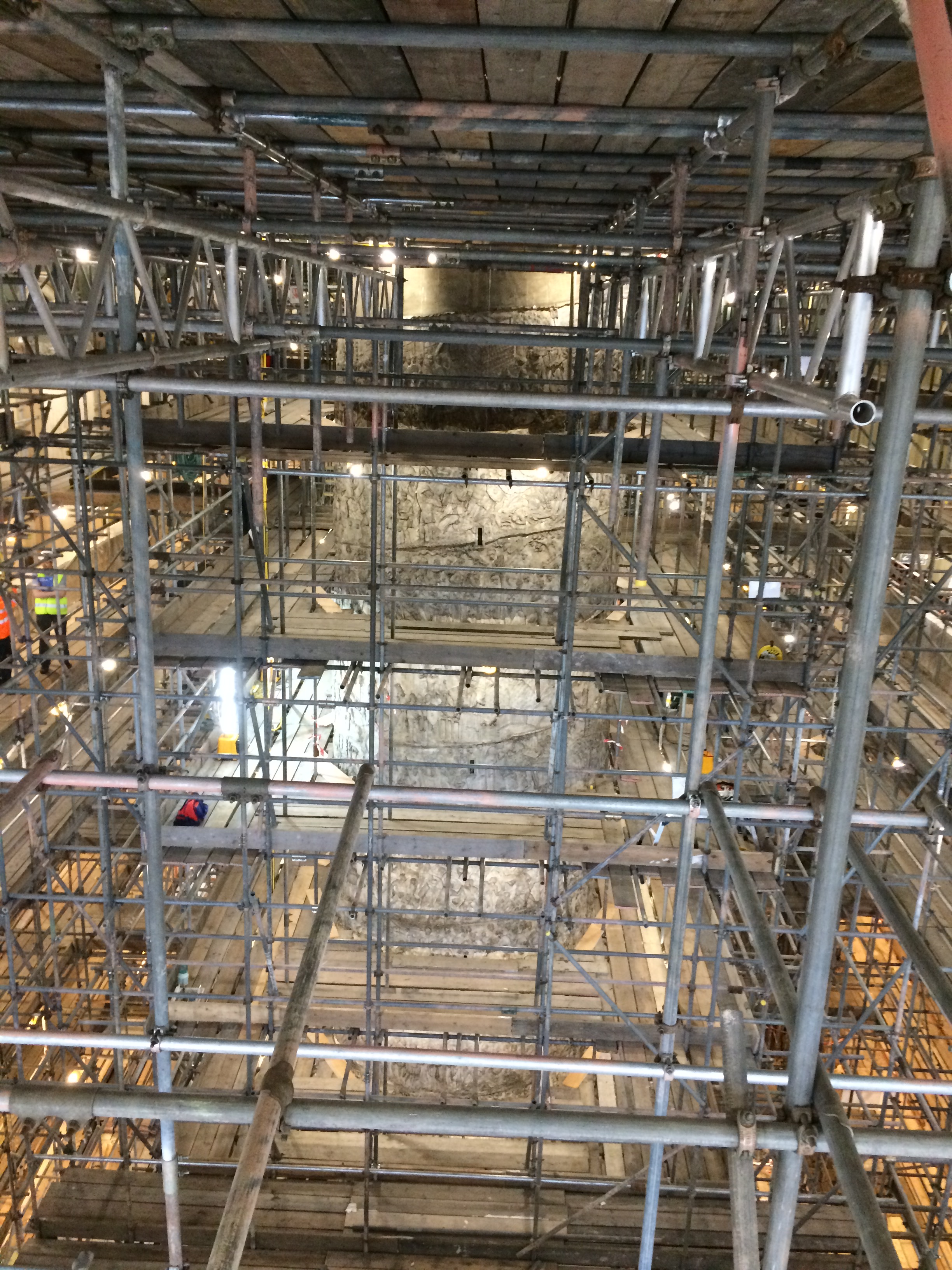 As regular visitors to the museum will know, the project to conserve the V&A’s two grand Cast Courts is now well under way. The conservation of Gallery 46B is complete, and the gallery has been open again for nearly 3 years. Since then phase 2 of the Future Plan project has commenced, and the neighbouring gallery (46A) has been closed to visitors. This has allowed conservation of the medieval court to take place, and for the entire gallery to be restored to its former Victorian grandeur.

In 2015 a number of smaller objects were removed, and the effigies were carefully lined up out of the way while work above commenced. The court was then transformed into a building site, and was completely filled with scaffolding over a period of three months. The gallery is now nearly unrecognisable, and is full of a giant maze of ten layers of scaffolding which reaches all the way up to the roof. This is a sight to behold in itself, and can be viewed through windows on the landing in Gallery 111.

The scaffolding has allowed the roof to be re-furbished and the court to be completely re-decorated, as well as enabling conservators to clean away layers of dust. The Cast Courts are filled with copies of some of Europe’s most famous sculptures and monuments, and although many of these are monumental in scale and size, most are made from plaster and are incredibly fragile. Therefore this project has provided an invaluable opportunity to conserve these objects, to ensure that they can continue to be enjoyed by visitors to the museum. The conservation of the court has also provided staff with a fantastic opportunity to get up close to the objects, which we would normally have to study from the ground.

We are fast approaching the final year of the project, and next week the scaffolding will be struck and will slowly be removed from the court over the next few months. This will allow low level objects to be conserved, new plinths to be constructed, and interpretation to be installed. At the same time a new Cast Courts Interpretation Gallery will be installed between the courts, and both galleries will be ready to open in autumn 2018.

Colleagues have been providing updates on the conservation of the courts on the museum blog, but from now on we will provide regular updates on the project’s progress. This blog will also afford glimpses into the space, and the new research that has been undertaken alongside the project. Watch this space…

Find out more about the Cast Collection on our collection webpages.
cast courts conservation FuturePlan History of the V&A sculpture

Fabulous images, indicating the magic of the Cast Court, even under scaffolding. Thank you Becky for evoking it so vividly in your blog.