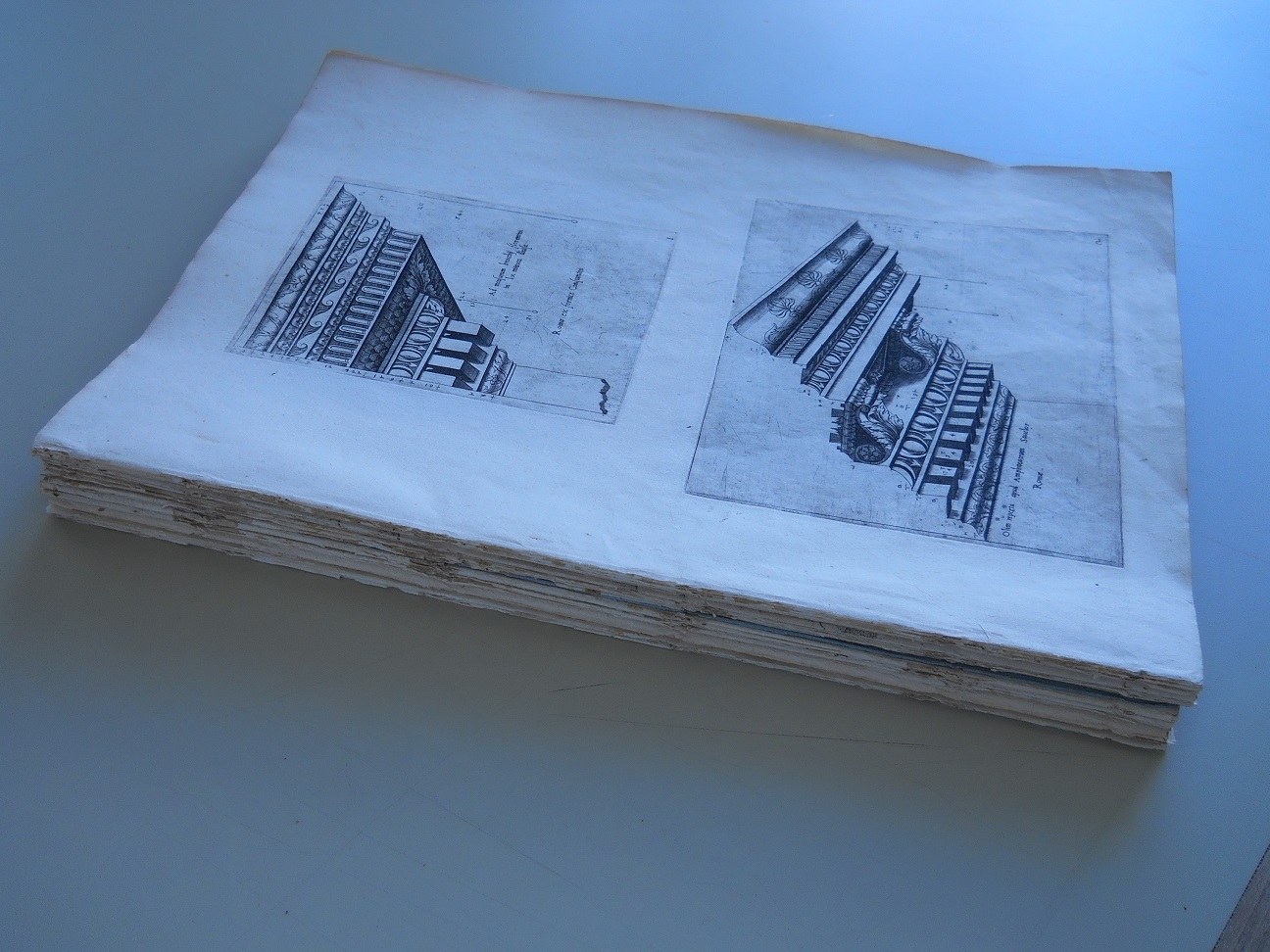 The aim of a workshop held in the Research Department of the Victoria and Albert Museum on 18 November 2016 organised by a prints curator, was to bring together about two dozen people: librarians, curators, conservators, historians of the book, specialists in information handling, and academics, to hold a conversation across and about this disciplinary boundary.

It took as its focus the curious case of a single sixteenth-century, Italian, vellum-bound volume that entered the V&A in 1873 containing nine architecture and ornament books, or suites of prints – depending on your viewpoint – published in Rome by Antonio Lafreri (1512-1577). At least three other volumes with near identical contents are known to exist in libraries in the USA and Europe. By 1899 the volume which the V&A had acquired in 1873, had been broken up by the museum and its contents divided between the museum’s book and engravings collections.

In the past, institutions have through a well- intentioned but ultimately misguided urge to impose order, ended up obstructing rather than helping the advancement of knowledge by destroying original compilations which are part of the meaning of these sources. It should go without saying that every effort should now be made to respect historic formats, if at all possible.

Following the establishment of a separate prints and drawings department at the V&A in 1909, the constituent parts of a single historic volume ended up being described in separate cataloguing systems using very different rules and conceptual frameworks. The workshop invited participants to consider how the contents of volumes like the V&A example are described by professional disciplines other than their own, and to discuss ways of bridging this gulf in the digital age.

The following represents an attempt to capture in an edited summary the character of the discussion and of thoughts submitted by participants in the immediate aftermath of the event. With so much collective expertise represented, some of the very experienced voices raised sometimes contradictory positions, tinged perhaps with an undercurrent of frustration.

Books and Bound Volumes of Prints

A book is essentially a multiple, intentional, textual object which will usually tell you what it is.

A bound volume of prints of the type found in prints and drawings collections, on the other hand, is a broad church including bound suites of prints, published books in the conventional sense (in which illustrations predominate), with publication place, date, etc. on a printed title page, and one-off albums. In calling a volume an “album” this is an act of interpretation assuming it does not to have a publisher or a place of publication.

What are people wanting to do with this information and in what ways is it searchable remotely?

Users need to be able to find, distinguish, select and/or obtain the thing they are searching for.

Users can be a very wide-ranging category both in terms of subject interest and level of expertise.

Interpretation can start with acquisition and deciding where an object will sit within an organisation. The reason for acquisition can also be important and needs to be reflected in the creation of the record.

Expressed in the division of library cataloguing between ‘Description’ and ‘Access’ is a recognition that the full expression of an object and the way people may wish to approach it are intrinsically distinct.

Scale is often overlooked or disregarded. I never trust anything I read in a catalogue. Cataloguing should be signed and dated.

The drive for economy led to the automated and the digital where standardisation is crucial to comparison.

A catalogue entry must be accurate. This is the first responsibility of the cataloguer to describe objects as accurately as possible.  If we don’t get the insistence on accurate online records right then all our kind of scholarship will go out of the window and objects will have no historical or physical context.

Relationships are more important than standards for this conversation.

Archive records have the most structured relationships between things.

The importance of creating object-level records for prints in volumes and albums otherwise there is the risk of them being unsearchable and irretrievable. Maybe then cataloguing the volume/album separately too.

Some of the volumes have had a few of their prints individually catalogued. That is fine, but you get no sense of the volume as a whole. It would be nice if there could be one ‘landing page’ for an entire volume, and ‘drop-down’ entries for the individual prints contained within.

Information is situational and sometimes you do have to do things twice.

Library and museum cataloguing systems have different purposes and for the time being the only response is to catalogue books with prints on both systems.

Book and print cataloguing have different foci for good reason, and we shouldn’t worry about cataloguing things on two systems. There’s no such thing as a perfect ‘global’ record structure. Although standardization is important – in that it’s necessary to be able to identify and compare similar objects across and within collections, there can be no precise science to cataloguing because there are multiple ways of describing and approaching the objects in question.

It is pointless trying to overturn hundreds of years of separate cataloguing traditions, never mind local differences. We should all carry on doing our own thing and information managers will take these and make them searchable simultaneously. There is now much more of a will to achieve this at the highest levels.

Catalogue records can serve different purposes for different people. Although our aim may be to have a single record for everyone for all time, this is a bit of a dream at the moment. We can always go back and change, improve or combine our records as technology or other factors allow. Of course, it helps if the original object is still around and hasn’t been dismembered in the meantime!

An interface needs to address users’ need to flick through a volume page by page.

Being able to compare images between institutions will become as important as within departments of the same institution. This is where the International Interoperability Framework becomes crucial.

The ideal outcome of a digital reconstruction would show layers of information and changes over time – both to the object and in terms of the understanding of it.

The research into the V&A Lafreri volume was generously funded by the Leverhulme Trust.

The organiser is extremely grateful to the workshop participants who were drawn from the British Library, British Museum, Universities of London and Sussex, and the Victoria and Albert Museum.

Incredible work! All of you do a staggering web journal, and have some exceptional substance. Continue doing amazing
http://www.bestcontentwriter.in/sop-writing-services/

Beautiful!! Look simple but still amazing! Thank you so much for sharing this article.

Thank you, I’m very pleased you enjoyed reading the piece.

Thank you! You too.

Brilliant work!.Really like to appreciate the graet effort done behind this successful presentation. Keep going. https://ukbestessaywriting.weebly.com/blog/influence-of-education-in-life

Thank you! Glad you enjoyed it.