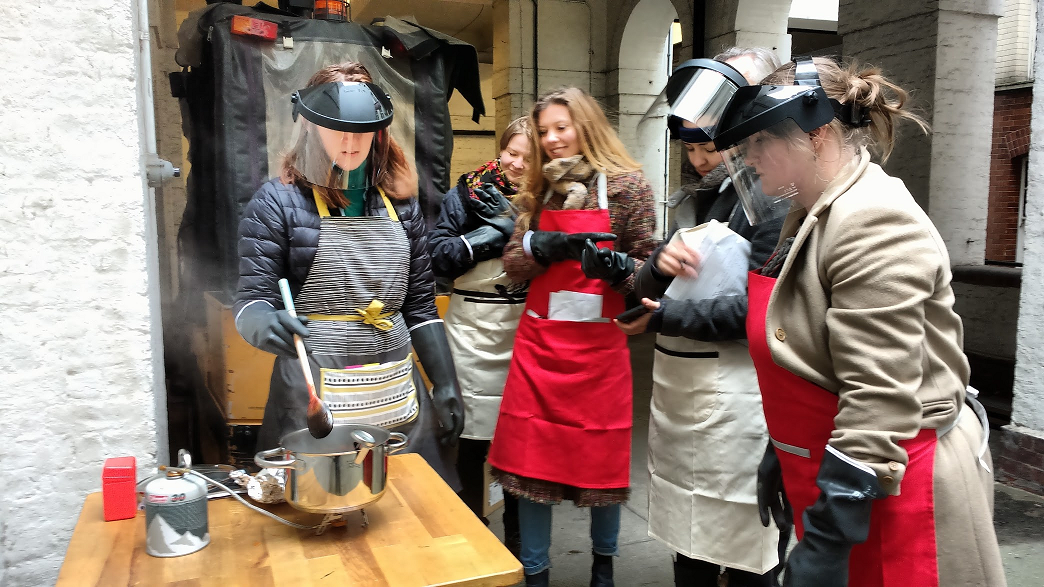 The Thinking and Experiencing ‘Techne’ course is a satellite project of the ‘Making and Knowing’ project based at Columbia University, in New York, and this year was also a collaboration with the V&A’s Robert H. Smith Scholar in Residence, Dr. Spike Bucklow, from the Hamilton Kerr Institute. For more details on the workshops see News & Events at the RCA.

In this post, students Liddie Caston, Jessica Eddie, Ayelet Shats and Cara Robinson reflect on the experience of making a wooden furniture varnish from linseed oil with the added benefits of amber. The inclusion of amber allows the varnished finish to set and dry more quickly than a simple linseed oil finish. As less time was needed between applying different coats of varnish, this quickened the overall production of wooden furniture. Multiple layers of varnish also increased the protective finish and therefore quality of a piece of furniture:

The varnish recipe we followed from a sixteenth-century French manuscript now in the Bibliothèque Nationale in Paris is rudimentary with few precise details, such as temperatures, which you would expect in modern instructions. It states:

‘The Germans boil the minium intensely in linseed oil, and to give it the consistency of varnish, they mix in heavily pulverized amber’.

Preparation of the Amber

The amber had to be finely ground so that it was easier to melt and combine with the linseed oil. Although not a feature of the original recipe, we prioritised health and safety and wore goggles and protective masks to avoid breathing in the fine dust. Grinding the amber produces a very sweet treacly aroma, a reminder of amber’s origins as a sticky tree sap before crystallisation. When you see amber in its raw state it is obvious why it was chosen as a finish to enhance and protect wood, as it is hard yet translucent and golden in colour.

We had to heat the linseed oil as well as the amber, so the two could be combined without cooling. As we were using a small camping burner, the linseed oil was stirred gently at regular intervals to encourage even heating and later a loose tin foil jacket was placed on top to maintain a steady temperature. As the oil heated up past 100 °C, it became slightly thicker and gave off a rich diesel or citrus aroma that became unbearable to be next to for long periods of time at 200 °C. After 72 minutes the oil reached 200 °C and at this point we added lead minium, as instructed in the recipe. Minium is a bright, orange-coloured powder added to help bond with the amber. This turned the mixture to a vivid shade of orange.

Having spent the previous week grinding the amber down to a fine powder, we were particularly keen to melt the amber correctly, especially as we knew that students last year had encountered challenges at the grinding and melting stages. As the melting point of amber is high, we used the modern day equivalent of a white hot flame: a scientific heating mantle with a round bottom flask to melt the powdered amber. Using a transparent glass flask also allowed us to see what was happening to the mixture.

During the melting process, the amber became a very dark colour and highly sticky, which made us concerned that the mixture had been ruined and would be unsuitable to use. We relied very much on our senses of smell, sight and touch (via the thermometer) to assess the melted amber. At times the mixture was grainy and so stirring at regular periods helped break the grains down whilst we remained careful not to let the mixture cool. As with the linseed oil, we put a foil cover over the top of the flask to ensure even heating. As the mixture fully became liquid and reached 300 °C it began to smell so strongly that anyone close to it had to wear a mask. Overall the amber took 64 minutes to reduce to a liquid suitable to combine with the linseed oil.

Combining the Linseed Oil and Amber 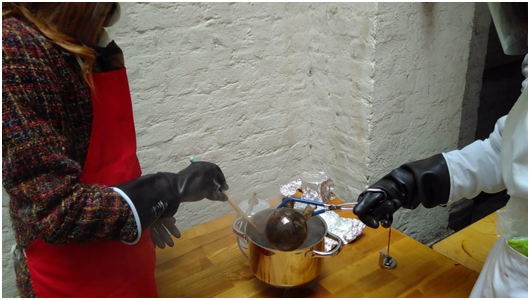 Gently stirring the linseed oil as the melted amber was added

When held to the light the mixture seemed to have dark impurities, which could have been in the ground amber or where some of the amber had burnt in the round bottomed flask. However, the mixture could be filtered to remove these (we were advised that white bread would also filter this well if we wanted to remain in keeping with the period of the recipe). The final mixture looked very dark in colour and so we were curious to see how it would appear on wood – a point for discussion in our next blog post.

The concept of techne relies heavily on the use of previous or tacit knowledge of a process or materials and we found this to be very relevant with this experiment. As the recipe text did not include much detail,  we often depended on our senses and intuition (as well as expert advice) to ensure the process was working. We would like to thank Dana Melchar (Senior Furniture Conservator, V&A), Dr Nigel Bamforth (Senior Furniture Conservator, V&A), Nick Humphrey (Curator of Furniture 1400-1700, V&A), Dr Spike Bucklow (Robert H. Smith scholar in Residence, from the Hamilton Kerr Institute)  and Dr Simona Valeriani (Acting Head of History of Design, V&A) for their enthusiasm and expertise during this lab class.

That amber is burnt, and not proper for a varnish. The method above, is not how the old masters made amber varnish. There are tried and true techniques, but generally none of them are followed. Amber varnish is dark, but there are ways to make it, so that it is strawberry red in color, and very transparent.

Hello there! really fascinating to hear your experience. Would love to talk to you and learn more!

Hello, I am a violin maker and have been making varnish with linseed oil and and rosin for years. It seems to me that you might have made varnish, it just looks lost in that black goo on the wooden spoon and beaker. I have wondered about adding amber to my varnish mix and found your post. If you have figured this out, I would like an update. My email is above. If not I might be able to help you with a path to success.

Hi Charles, thank you so much for your comment. It would be lovely to have a chat about your working methods and compare our experiences. Ours was an experimental teaching workshop and we could certainly learn from your long experience. Please do drop me a line on s.valeriani@vam.ac.uk.