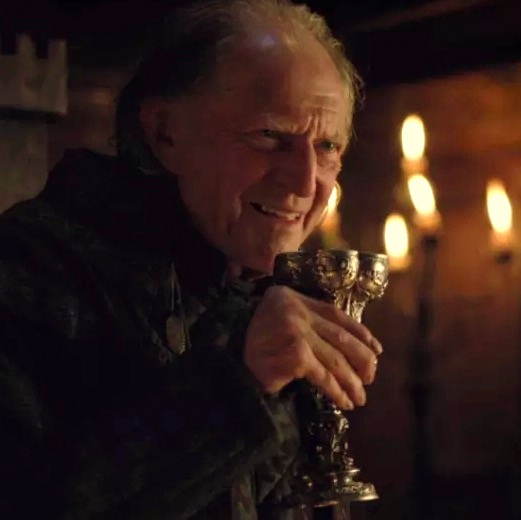 One of my eagle-eyed colleagues recently spotted that an object from the V&A’s collection appeared to have found its way into an episode of Game of Thrones. The object in question can be seen above in the hands of the particularly unpleasant Lord Walder Frey, played in the show by David Bradley. It is remarkably similar to the cup below, from the Metalwork collection. 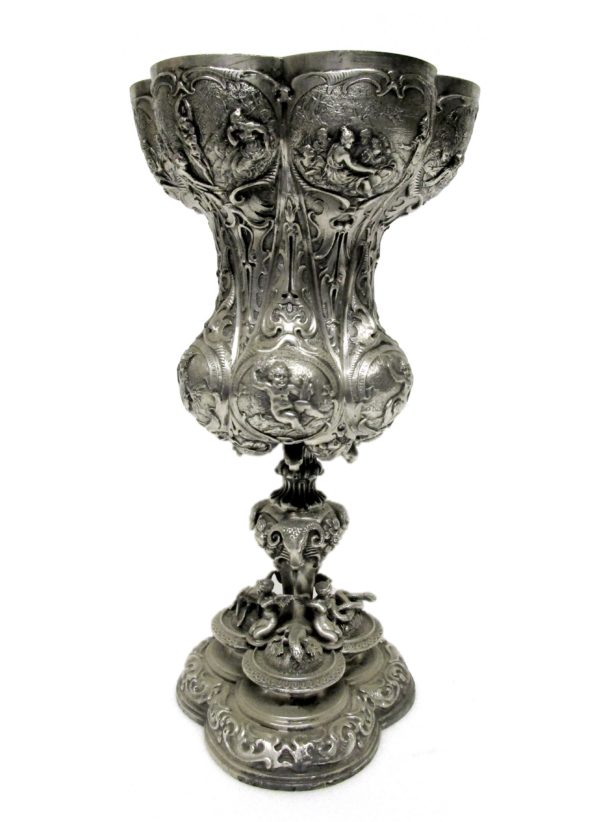 Electrotype cup made by Elkington, Birmingham, 1852.
Museum no. REPRO.1852A-3. © Victoria and Albert Museum

Looking back through some previous episodes it seems that Walder Frey is rather fond of this cup. It is almost always present on his dining table and he has been shown to drink from it on numerous occasions, including at the infamous ‘Red Wedding’ of Season Three.

So, why does Walder Frey have our cup?

The answer is that both Walder Frey’s cup and the one in the V&A collection are in fact electrotypes, produced by the Birmingham-based company Elkington & Co. Electrotyping is a process which uses electric currents to deposit metal particles on the surface of a mould, creating a very accurate and faithful impression of the original object. From 1852 onwards, Elkington was commissioned by the V&A (then known as the South Kensington Museum) to produce thousands of electrotype copies of historic and contemporary objects. These were produced not only for the Museum’s own collection, but also as part of a programme of disseminating works of art to design schools to act as models for artists. Many more were sold internationally to museums and members of the public.

The above snippet from the V&A’s electrotype register tells us that this cup was copied by Elkington in 1852, and was therefore one of the earliest electrotypes produced for the Museum by the company. It was copied from a 16th-century cup in the British Museum, which can be seen here on the British Museum’s website. The V&A now has three copies of this same cup in its collection, all produced by Elkington at around the same time. However, it is likely that many more versions were produced.

The register also shows that this cup was originally thought to have been Italian in origin. It is one of many objects which were erroneously given the name ‘Cellini’, as they were once thought (and perhaps hoped) to have been associated with the famous Italian artist of that name. However, the original cup is in fact of German design, and was made in Nuremberg in the 16th century. It is similar in design to other German cups in the V&A collection from the same period, such as the one shown below. These were known as columbine cups, because of their resemblance to the columbine flower. 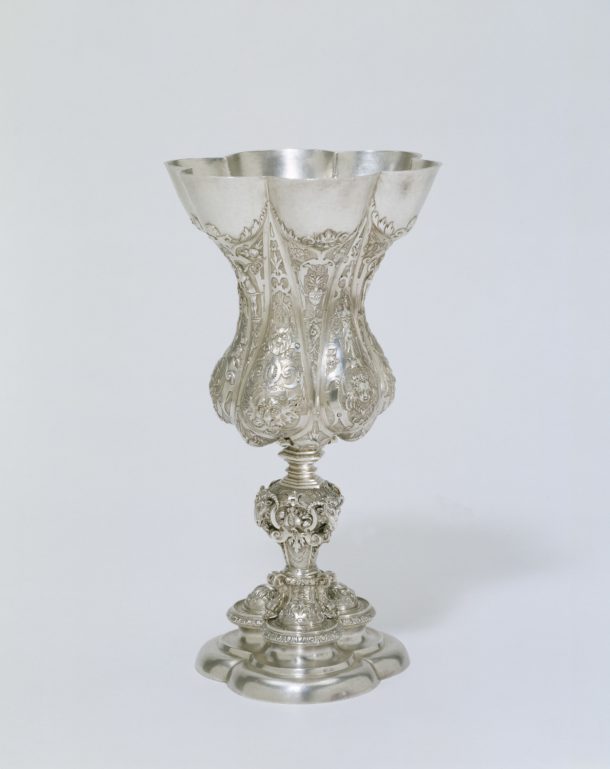 While we don’t know exactly how Walder Frey’s copy of the cup found its way onto the Game of Thrones set, we do know that Elkington’s electrotypes have an impressive history of being used as props in both TV and film. Some of Elkington’s copies are known to have ended up at famous film studios such as MGM, and we have spotted some familiar objects in films such as Ben Hur and Indiana Jones and the Last Crusade. We even think we may recognise a few of the other items on Walder’s Frey’s table.

It is fascinating to see how the 19th-century replication technology of electrotyping has allowed this cup’s form to travel the world and to show up in such an unexpected context, while the original has remained in the British Museum for all these years.

Have you spotted any other familiar historical objects in Westeros? Let us know in the comments below!

To read about another famous electrotype by Elkington & Co., take a look at A Unique Replica: The Wimbledon Ladies Singles Trophy.

8 comments so far, view or add yours

What a great connection between the past and present!
I hope the V&A shop will stock some replicas. They would make excellent Christmas presents!

A fabulous blog Alex! Thank you for posting.

What an excellent blog Alex, proving that museum collections directly affect our lives, and open up all sorts of avenues of knowledge. Thank you!

I have just found one

I have one too