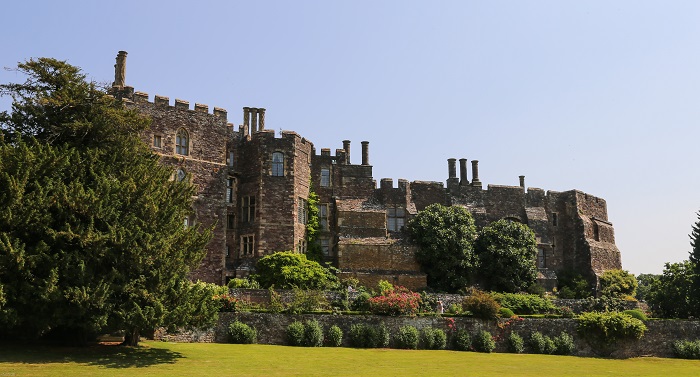 One of Britain’s most historic and atmospheric properties, Berkeley Castle, is holding an exhibition throughout September called ‘The Hidden Treasures of Berkeley Castle’. The exhibition shows rarely seen items from the Berkeley family collection, including a beautiful, gold, Saxon ring decorated with dogs’ heads and delicate gold filigree, which has been in the family for over 200 years.  Also on display is a portrait miniature by Nicholas Hilliard of Elizabeth I playing the lute and the much disputed Godwin Cup, inscribed in 1766 with a claim that it was the drinking cup of the Saxon magnate, Godwine Earl of Wessex who died in 1053 (but was in truth adapted from silver vessels made in the late 16th century). It is a rare opportunity to see such historic family heirlooms in the context in which they were collected and preserved.

Joining them is another Berkeley treasure, a little less hidden, as it is normally on show in the V&A’s Whiteley Silver Galleries. It is a gold cup and cover bearing the hallmarks of the most celebrated goldsmith ever to work in England, Paul de Lamerie (1688-1751).

The cup is from the early part of De Lamerie’s career, long before his great swirling, Rococo masterpieces of the late 1730s and 40s, but bears witness to the high quality of his output. De Lamerie was the son of French Huguenots who came to London in the 1690s, fleeing from religious persecution. The cup is of austere Queen-Anne style, a fashion seen as quintessentially English but which reached its peak in the hands of French refugee goldsmiths in London. Adding to the significance of the cup is that it is the only surviving piece of goldwork bearing Paul de Lamerie’s mark.

The cup is in the form of a caudle cup or posset cup, both used for spiced ales and wines, but it is evident that this example was intended more as an heirloom than a functioning object. It is in exceptional condition and has hardly been used. The outside of the bowl is engraved with the coat of arms of Berkeley impaling Noel, for Elizabeth, Countess of Berkeley (d. 1719), daughter of Baptist Noel, 3rd Viscount Campden and wife of Charles  Berkeley, 10th Baron and 3rd Earl of Berkeley (1649-1710). Inside the cover is the inscription, ‘The Countess of Berkeley’s Legacy to her daughter ye Lady Eliz. Germain.’ The cup has remained a valued family, possession for 300 years.

After visiting the exhibition at Berkeley, a two-hour drive along the M4 will bring you to more Berkeley treasures at the V&A. On show here are the Hunsdon Jewels, four great Elizabethan heirlooms which the Berkeley family has generously lent to the V&A for display in our British Galleries. (Click on the images below for more information.)

The jewels – a bracelet, a cameo, a girdle prayer book and a ship pendant – were, by family tradition, gifts from Elizabeth I to Henry Carey (1526-1596), 1st Baron Hunsdon, a cousin of the Queen. His son George Carey (1547-1603), 2nd Baron Hunsdon, bequeathed them for the use of his wife and his daughter, Elizabeth, the wife of Sir Thomas Berkeley, describing them as follows:

“… my greate Aggate wherein is embossed the Portraiture of Perseus and Andromache … my Jewll with two fare and great Amatistes orientall and my Jewel of the great diamonde of the golde Myne or otherwise called a Topas orientall sett aboute with diamonds … I esteeme them right Jewells and Monuments worthie to be kepte for their beautie and rarenes and that for money they are not to be matched nor the like yett knowne to be founde in this Realme w[hi]ch maketh them rightlie Jewells of estimat[i]on.”

The V&A holds the national collections of silver and jewellery. Occasionally, loans in of exceptional quality from private collections complement the displays. We are extremely grateful to the Berkeley family for their ongoing support of our galleries in this way.

For more information on the V&A’s silver collection, click HERE

For more details of the Hidden Treasures exhibition, click  HERE