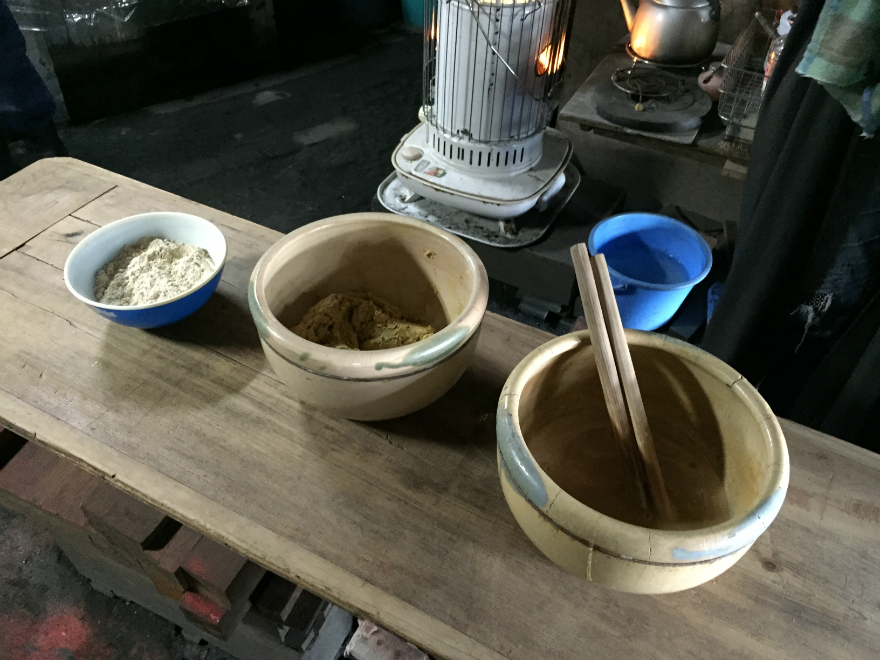 I travelled to Tokyo recently to attend a symposium hosted by Bunka Gakuen, one of the world’s leading fashion colleges. As well as days of formal events, the organisers had kindly arranged various visits for the participants, one of which was to a dyeing workshop in Hachiōji. This town is about 40 kilometres west of Tokyo and is surrounded on three sides by mountains. On the day of our trip the weather was cold, but beautifully clear and sunny and we had a great view of Mt Fuji from the train.

On arrival in Hachioji station we took taxis to the workshop and home of Hiroshi Noguchi, a sixth-generation dyer specialising in indigo katazome (stencil dyeing).  Established in the late Edo period (1615-1868), the Noguchi business originally specialised in small-scale stencil dyeing (komon) for the formal attire (kamishimo) of samurai. With the dawning of the Meiji period (1868-1912) and the loss of military patronage in the 1870s, they shifted to larger-scale stencil dyeing for kimono. In the early 1920s the firm moved from Kyōbashi, in central Tokyo, to Hachiōji. Mr Noguchi works with his son, while his grandson – the eighth generation – is still at an age to be playing on his bicycle, but will hopefully take over the family firm in due course. Noguchi supply exclusively to Chikuzen, one of Tokyo’s most famous kimono stores.

Noguchi employ a centuries-old method of resist-dyeing using rice paste, mulberry-paper stencils cut in Mie Prefecture and indigo grown in Shikoku. We were able to watch Noguchi Jr at work while his father explained the process.

The paste is made from rice husks,lime and water.

Noguchi dye patterns on both sides of the cloth, a highly skilled technique that requires great precision. Red pigment is added to the rice paste so that the design can be seen more clearly.

The cotton cloth was laid out on long boards and the starch paste was applied with a spatula through an elaborately cut stencil. The stencil was carefully lifted and re-aligned on the next section of the cloth, and the process repeated along the length of the fabric.

After one side of the fabric had been pasted with the design the length, still on its board, was placed outside to dry in the sun.

We did not have time to see the whole process carried out with this particular length of kimono fabric, but stencil-pasted handkerchief squares had been pre-prepared for us to dye.

We first put the squares of cloth in hot water, which helps the dye to take evenly, before Mr Noguchi attached them to a curved bamboo splints which acted as handles. We each then dipped our squares of cloth in the indigo dye bath. It was quite difficult to ensure that the cloth was submerged straight and evenly.

The vats themselves were 150 years old, having been transported from the original Tokyo workshop, and were a metre deep. Indigo turns blue on exposure to oxygen and it was amazing to pull the cloth out of the dye, and watch it turn from green to blue.

The intensity of the blue depends on the number of times the cloth is dipped in the dye bath. We dipped our handkerchiefs two or three times. We then put them out in the sun to set the dye before Noguchi Jr washed them- first in hot water, brushing off the paste, and then in cold.

Twenty minutes more in the sun and the dye was fixed and the cloth was dry. Our efforts may not have been as perfect as those of the master and his son, but we each had a lovely souvenir of our visit.

i am in tokyo now and hope to visit this studio. i enjoyed your detailed description and photos. i am a batik artist and indigo dye is my favourite.