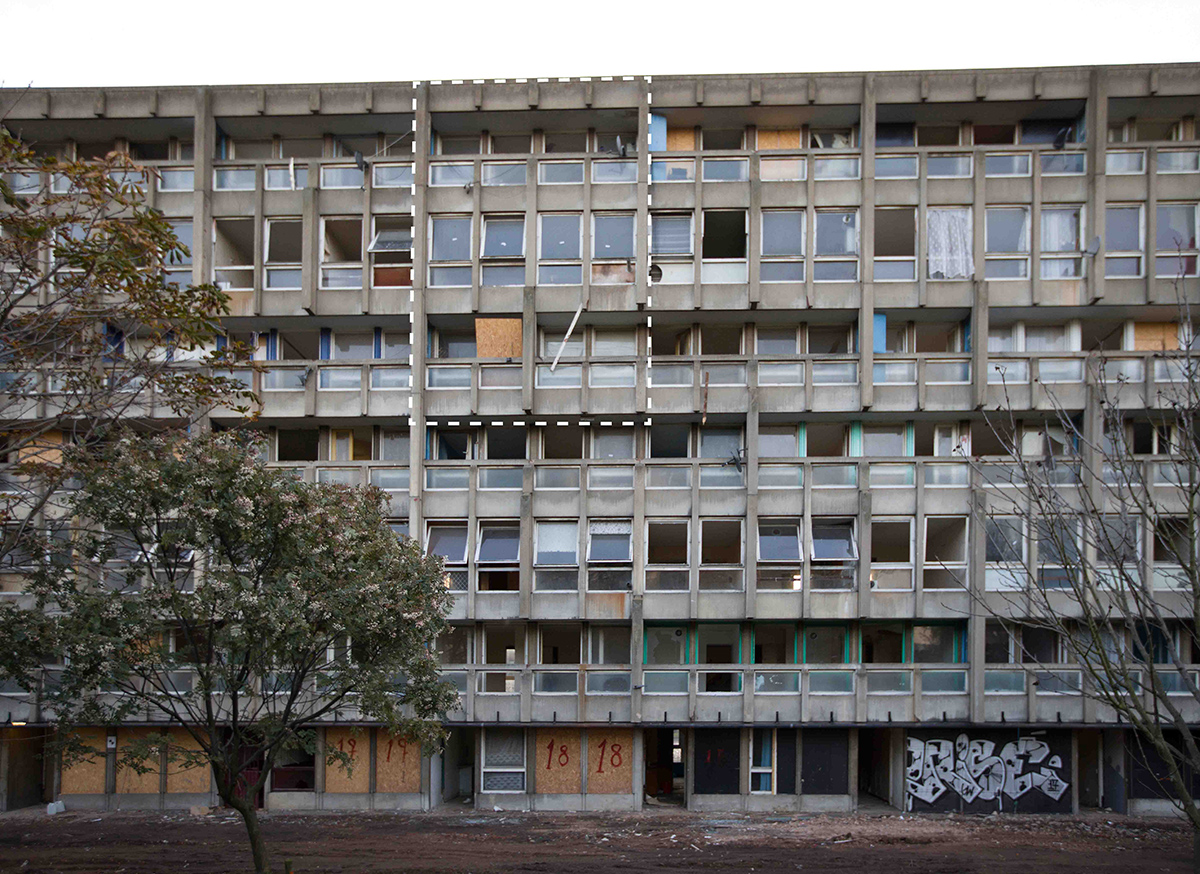 As a fragment of Robin Hood Gardens is being removed, Dr Neil Bingham, V&A Curator of Contemporary Architectural Collections, reports on latest developments at the demolition site.

How do you remove a whole chunk out of a large concrete building? Answer: with care – especially when it is destined to become a museum object.

Two maisonette flats stacked over three stories are currently being removed from Robin Hood Gardens – the large social housing estate in East London from 1970 by the great Brutalist architects Alison and Peter Smithson. This is one of the V&A’s latest acquisitions, secured over the summer as demolition was just beginning. And it’s a whopper at 8.8 metres high, 5.5 metres wide and 8 metres deep. The V&A, however, is not shy of collecting imposing architectural objects … think of the plaster cast of Trajan’s Column in the V&A Cast Courts, volumetrically much greater in size than the new acquisition, and so tall that it has to be displayed in two halves.

The acquisition includes both the exterior facades and the interiors, which have now all but been removed, leaving behind walls and floors. Exterior elements are to follow as the demolition progresses quickly. The estate is very much a demolition site, not exactly the ideal conditions for working on a museum object.

The flats acquired by the V&A are located at the top of the first of the two blocks that make up the estate. Both flats are entered from the seventh floor, off the upper of the two communal outdoor walkways, known as ‘streets in the sky’, that snake along the street side of the building. The doors of the two flats face each other, in a neighbourly gesture, intended to foster interaction between residents.

Entering the larger of the two flats on this floor, you find the kitchen, a bedroom, toilet and bathroom. Then you go down a set of stairs to the sitting room and another bedroom. Entering the other flat you find only a staircase going up. The whole one-bedroom flat is on the top floor, with grand views across London (unfortunately we can’t take the views with us). It’s a fascinating interlocking of flats that plays in combinations throughout the building according to their size. A rectangular block was chosen for the V&A due to ease of removal and the ability to display the flats in the future.

All interior features were recorded before removal. Each component was numbered and photographed in situ and the data logged. The doors and their casings, kitchen units, wardrobes, panelling, skirting boards – were all made of stained timber, allowing a natural warmth to flow throughout the flats. Last week, the internal upright walls within the flats were demolished, leaving the eerie yet beautiful spectacle of the open spaces of the two flats intermingling.

The windows with their frames and glass will come out. All the frames on the interior side, overlooking the green park between the two buildings, are the original timber ones. The street-side windows are later vinyl replacements; fortunately, a few originals have been found around the buildings. And finally, the biggest interior features will be lifted out … the two concrete staircases.

The concrete elements composing the outer two sides of the flats, both different in design, will be disassembled. The architects chose a ready-to-assemble system from Sweden – the home of the IKEA flat-pack – made from precast components that were shipped over and assembled on site, mainly by bolting together. In theory, it sounds a simple case of just unbolting the big concrete pieces – but in reality, the fixings are now old and the concrete brittle. Many elements, such as the long fins which acted as noise deflectors, weigh more than two tonnes each and will involve delicate and precise handling.

So, if you thought moving flat was stressful, try moving two!

The architects chose a ready-to-assemble system from Sweden