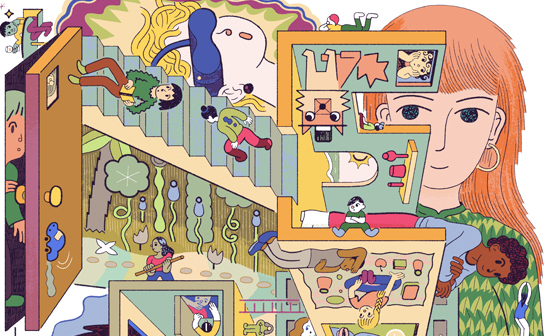 How do the virtual worlds of videogames reflect and augment our reality?

With VR headsets hitting the high street and augmented reality sending players hunting through their neighbourhoods 2016 has seen our virtual and physical worlds collide like never before.

But what does it mean to design a virtual world? Come join us on Friday 25 November 2016 as we hear from leading designers, artists and thinkers whose work explores the ways in which videogames reflect and augment our reality.

Parallel Worlds is the V&A’s first conference dedicated to the design and culture of videogames and provides a brand new critical platform to discuss one of the most important design fields of our time.

This inaugural event will continue into the evening with a Parallel Worlds themed Friday Late where your reality will be further distorted with a host of arcades, workshops and demonstrations across the Museum.

Laura Dilloway – Guerrilla Games
Laura has been working as an environment artist in the games industry for over 10 years. She is currently a Senior Artist on the ground breaking RIGS Mechanized Combat League (Guerrilla Games) for the new PlayStation VR, heralded by some as a ‘game that could never be made’.
www.playstation.com/en-gb/games/rigs-mechanized-combat-league-ps4/

Meg Jayanth – Freelance Writer & Game-Maker
Meg Jayanth is a Writers’ Guild of Great Britain award-winning game-maker and writer. She was lead writer on inkle Studios 80 Days – nominated for four BAFTAs (including Best Story) which was named TIME’s Game of 2014.
www.megjayanth.com

Auriea Harvey and Michaël Samyn – Tale of Tales
Tale of Tales are a studio known for controversial and innovative projects that push what videogames can be. Their current work focusses on VR, the synthetic image, and artistic uses of technology with a new project called Cathedral-in-the-Clouds.
www.tale-of-tales.com

Keiichi Matsuda – Critical Design
Keiichi Matsuda is a future-facing designer and film-maker who focusses on the dissolving boundaries between virtual and physical. His recent work includes the acclaimed 2016 concept film Hyper-Reality.
www.km.cx

Pol Clarissou – Klondike
Pol Clarissou is a developer and artist who likes to experiment with games as a medium, and play with the tools and processes of digital arts. Even the Stars and Orchids to Dusk are the biggest amongst the many shortform game-like experiences he’s released, while also toying around with weird hardware, tiny zines, or whatever grabs his fancy.
www.polclarissou.com

Héloïse Lozano – Klondike
Héloïse Lozano is a game artist and illustrator who loves to play around with the videogame medium to share reflections, little joys and fears, or even just peaceful moments via alternative worlds and installations. She is a member of the Klondike collective, and is currently working as a 3D artist in a videogame company.
www.heloiselozano.wordpress.com

Simon Parkin – Author and Journalist
Simon Parkin is a British author and journalist. He is a contributing writer for the New Yorker.com, and has written about the art and business of game for the Guardian, New Statesman and many others. Parkin’s book, “Death by Video Game” is a New York Times Book Review editors’ recommended read, described as “weighty, often serious — and very, very good.”
www.simonparkin.com

Holly Neilsen – Historical Researcher and Journalist
Holly Nielsen is a historical researcher and journalist that specialises in video games. Some of the places she has written for include; The Guardian, The Telegraph, International Business Times and Vice. As well as regularly reviewing games for Sky News. Holly also works as a guest lecturer, speaking to both history students and game developers and has given lectures at King’s College London and the National Film and Television School

Marie Foulston – Curator of Videogames for the V&A
Marie Foulston is the V&A’s Curator of Videogames and is currently working with the museum to establish new ways of collecting and exhibiting videogame design and culture. Before her time at the V&A she worked as a curator specialising in independent videogame design and playful interactive experiences with the collective The Wild Rumpus, collaborating with partners that included Keita Takahashi (Katamari Damacy), the EMP Museum (Seattle) and the Art Gallery of Ontario (Toronto).

Kristian Volsing – Research Curator, Videogames for the V&A
Kristian Volsing is a Curator in the Design Architecture and Digital department of the Victoria and Albert Museum, currently researching the design and culture of contemporary videogames for a forthcoming major exhibition. Previous projects have included the Civic Objects strand of the museum’s 2015 exhibition All of This Belongs to You; T-Shirts 101, a display on the history of the T-Shirt for the Fashion and Textiles gallery and Rapid Response Collecting, an ever-changing gallery that explores the intersections between contemporary design, mass manufacture and global events.

13 comments so far, view or add yours

Hello! I’m confused where to book the ticket. I’m clicking on the link but it sends me here https://www.vam.ac.uk/shop/ I can’t find it on the website. Could you send me a working link, please? Thank you.

I’ve just double checked the links above and they seem to be working okay for myself. If you’re still having issues though you can reach tickets by visiting the V&A home page (vam.ac.uk) selecting ‘whats on’ from the top menu and then on the calendar which appears on the right hand side of the screen select ‘November 25th’ if you scroll down the page for that days events you can find a link to conference tickets about three quarters of the way down. Hope this helps.

Really enjoyed the conference on Friday – a great line up of speakers and topics. I understand it was being recorded – are there plans to make this available at some point?
Thanks

Thank you very much for this informative article

It is good to know that parallel worlds a new video game would do fab because of this design it is looking cool.

Thank you very much for this informative article

Now Play This, a games festival at Somerset House in London, and makes research-based and site-specific games.

Parallel Worlds is the V&A’s first conference dedicated to the design and culture of videogames and provides a brand new critical platform to discuss one of the most important design fields of our time.

It is good to know that parallel worlds a new video game would do fab because of this design it is looking cool.

A great line up of speakers and topics. I understand it was being recorded.

Now Play This, a games festival at Somerset House in London, and makes research-based and site-specific games.