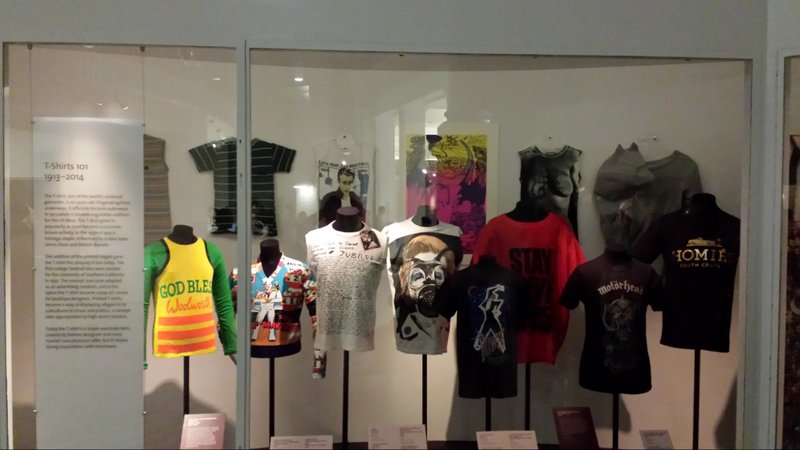 It is 101 years since the T-shirt, one of the world’s most ubiquitous garments, was officially recognised as outerwear. This is the second in a short series of blog posts reflecting on the garment’s history to accompany the small display in the V&A fashion galleries, drawn from the extensive collection of T-shirts in the Textiles and Fashion and Theatre and Performance collections.

The word T-shirt was first recorded in print in 1920, in F. Scott Fitzgerald’s debut novel, “This Side of Paradise”:

“So early in September Amory, provided with “six suits summer underwear, six suits winter underwear, one sweater or T shirt, one jersey, one overcoat, winter, etc.,” set out for New England, the land of schools”.

It wasn’t until 1938, however, that the first tees marketed as outerwear for civilians were sold in American department store Sears, for 24 cents (about $4 dollars in today’s money). They were sold as “gob” shirts, American slang name for a Navy seaman.

In 1941 they readvertised them as Army style T-shirts, with the slogan “You don’t need to be a soldier to have your own personal t-shirt”. The coverage of the war in the media, featuring the military clad in t-shirts in newsreels, the press and on the cover of magazines, associated the t-shirt with heroic masculinity, popularising the style further among civilians.

During the second world war, white tees were issued to U.S. Army and Navy troops. These made soldiers a stark target for enemy fire. They began dyeing their t-shirts khaki and from 1944 khaki camouflage tees replaced the white ones as issue standard for troops in the South Pacific jungles. 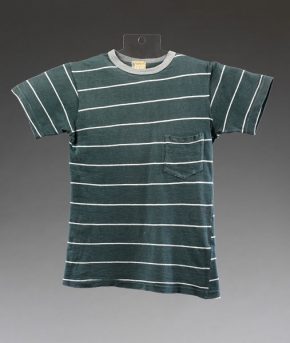 The t-shirt pictured here is the earliest proper t-shirt in the V&A collection, dating from between 1941-1945, and was donated by a former Curator of the Textiles and Fashion department. Made by a manufacturer going by the name of Tropicool, it had been bought and worn by her father during his time serving the American army in the South Pacific during the Second World War.

US soldiers had also begun printing their uniform issue T-shirts with their station post, corps or point of origin. A Life magazine cover from 1942 features a muscular soldier with gun in hand, proudly wearing a T-shirt printed with the slogan “Air Corps Gunnery School Las Vegas Nevada”. Not only was this the first instance of a magazine cover featuring a T-shirt, but it also also cemented the future use of the T-shirt as an advertising medium. 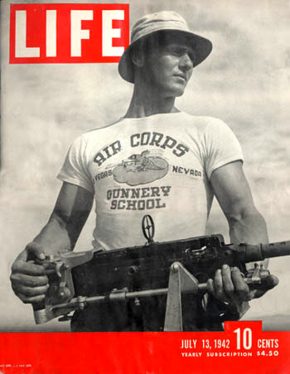 It wasn’t the first time that a slogan had appeared on a T-shirt, however. Ten years earlier, in 1932, the University of Southern California had introduced plain t-shirts as part of their American football team’s uniform. They were used for their sweat-absorbing and easy-cleaning properties, and because they stopped shoulder pads chafing. They became fashionable among students, leading to shirts being stolen from the university team, so to discourage theft they were printed with a Property of USC logo. This branding made them immediately more desirable to students. USC’s response to this was to start selling them in the campus bookshop. This first slogan t-shirt was to become an iconic piece of streetwear, still available in the same design today. Manufacturers and marketers took note of this development – a fashion statement in the early days of the establishment of teenage consumer culture.

Slogan t-shirts began to be used politically, the first time to promote Thomas E Dewey for the Republican Party in the 1948 elections (he lost to Harry S Truman), and were quickly appropriated by other political persuasions, such as the National Association for the Advancement of Colored People, the “Peace and Love” symbols of the hippies in the 1960s and feminist associations and gay rights in the 1970s and 80s. Many companies also began giving away promotional t-shirts advertising products such as Coca-Cola, Budweiser and cigarettes. The most quintessential of these is the I ♥ NY tee, which was designed pro bono for a marketing campaign in 1977 by graphic designer Milton Glaser. It has been adopted as an unofficial symbol of the state worn iconically both by Punks, the subculture that exploded in New York as the design was released, and conversely by tourists, to which these tees are sold in their millions.

In the next installment I will be taking a deeper look into some of the iconic boutiques and designers with tees featured in our display. Check back next month for more T-shirt times!

the history of the t-shirt was amazing added more to my knowledge thanks for such an informative blog.