V&A experts have discovered a previously unrecorded oil sketch by John Constable. The newly discovered work was concealed beneath a lining canvas on the reverse of Branch Hill Pond: Hampstead. It will now go on public display in the Paintings Galleries.

The recent discovery was made by V&A conservators Clare Richardson and Nicola Costaras while preparing works for the Museum’s major autumn 2014 exhibition Constable: The Making of a Master. X-radiography had formerly revealed evidence of another composition on Branch Hill Pond: Hampstead but it had been assumed that these were traces of an over-painted scene on the front. As the lining had become loose, the conservators removed it and discovered the previously hidden oil sketch on the reverse of the painting. 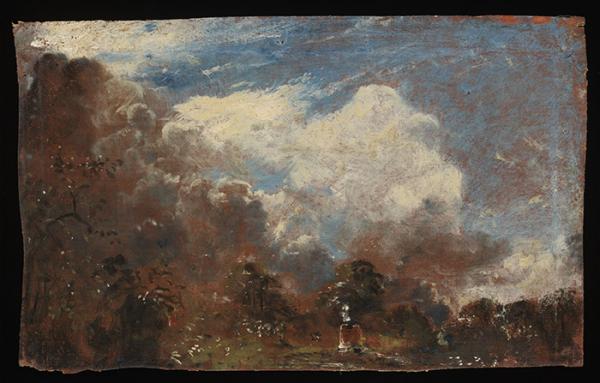 In 1888 Constable’s last surviving child Isabel, gave the remains of her father’s studio contents to the V&A. Constable is known to have been thrifty with his artist’s materials and sometimes painted sketches on both sides of a support. Six of the oil sketches bequeathed to the V&A were previously known to be double-sided. The Museum register for 1888 indicates that some of these artworks arrived without mounts and several double-sided works were recorded on receipt, while others arrived framed and glazed with the result that scenes on the reverse were not noticed until later.

The new oil sketch depicts a narrow clearing fringed by trees set against an unsettled sky, a wedge-shaped expanse of dark clouds at lower left parts to reveal a stretch of blue sky with white clouds. In the foreground a brown cylindrical structure with a waft of smoke is visible, most probably representing a kiln. The scene was probably made in the late summer of 1821 or 1822, when Constable painted a number of sketches featuring similar cloud studies and motifs. 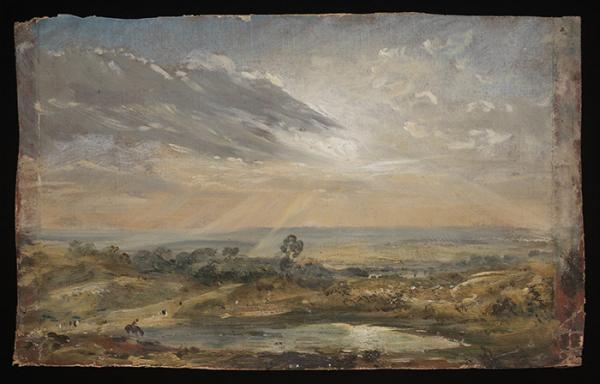 Constable: The Making of a Master opens on 20 September 2014. This major exhibition will reveal how Constable created some of his most loved and well-known paintings. It will present the English painter for the first time alongside the old masters of classical landscape. On display will be such famous works as The Haywain together with the oil sketches he painted outdoors direct from nature which show unequalled skill in capturing transient effects of light and atmosphere. The exhibition will also examine Constable’s collection of over 5000 etchings by masters including Rembrandt and Dürer, which was a vital resource for his own image making, as well as the mezzotints of his paintings which he made in the last decade of his life with the engraver David Lucas to secure his lasting legacy.

A detailed essay about the discovery by Mark Evans, Clare Richardson and Nicola Costaras, is published in the December issue of the Burlington Magazine

Dear Sir, I immensely look forward to the coming Constable exhibition at the V&A, and will come over from Oslo to London to see it. I have a private collection of British art (mainly Scottish), including a small sunset scene, oil on board, unsigned, from Hampstead Heath (possibly looking towards Harrow) which in my opinion and that of several professionals here is very strongly reminiscent of Constable’s style. It was bought in the late 1950s at auction in Glasgow, but at the time no particular attention was paid to it. I have recently had it cleaned by a professional conservator, and looking at it, I feel it would be justified to submit it, if possible, to an expert’s opinion at the V&A. I take a serious interest in British art, and have written a full-length study of William McTaggart, published in 2007, published in Edinburgh by Atelier Books. I would be extremely grateful if you would allow me to send a good photo of the painting to the V&A for scrutiny by your expert staff. Yours sincerely, Per Kværne, Professor em., University of Oslo; member, Norwegian Academy of Science and Letters

Hi Professor Kværne,
Thanks for commenting. Glad to hear you are looking forward to seeing our exhibition. It sounds like you need our Opinions Service http://www.vam.ac.uk/content/articles/o/opinions-service/.
If you can’t bring your painting into the Museum in person, enquiries can be dealt with by post or email.
Lizzy (Content Editor – V&A Digital Media)

I have a painting by john constable cottage in the corn field found in back London Victoria museum number 940GR is this worth anything?

Much of John Constable’s current reputation as a painter rightly rests on his development of the ‘plein-air’ oil sketch and his naturalistic style of painting. Also...