As the Gezi Protests in Turkey continued with excitement along with tragedy and police violence, a pantheon of heroes was created by the protestors. Since the protests still continue the list of heroes remains unfinished and new characters are included through popular appeal as the events progress.

The digital poster above is an early version of the pantheon of Gezi heroes in which some influential groups and iconic persons are represented in a cartoonesque style. The Turkish word Yenilmezler in the background literally means Unbeatables but it actually refers to the American movie Avengers since the movie title was translated into Turkish as Yenilmezler.

– Woman in black and woman in red: Have been photographed in different scenes which featured explicit police violence and both women became symbols of civil resistance.

– Standing Man: Became a symbol of ultra passive resistance by standing still in a public square for more than 7 hours straight.

– Talcid Man: Wore a liquid tank filled with Talcid medicine behind his back and used it to heal those affected by the teargas.

– Carsi: The main supporter group of Besiktas, one of the three most popular football teams in Turkey. Played an active role during the resistance against the police.

– Naked man: A man, who was photographed during the protests fully naked, standing in front the police one night in the middle of an avenue leading to the main square Taksim. His pose resembles Michelangelo’s David.

One of the digital posters circulating around the social media was a joint image of two photographs from the protests in Turkey and Brazil with a famous caption on it: ‘Together We Stand Divided We Fall.’ A famous phrase, which was also used by Pink Floyd in their song Hey You, refers to domestic and international solidarity of the protestors, claiming that the strength of the people arises from their unity. It is enchanting and quite moving to see Brazilians and Turks – who rarely shared anything in common in their history mainly due to geographical distance of their countries – supporting each other with flags in the streets and through images on the web. 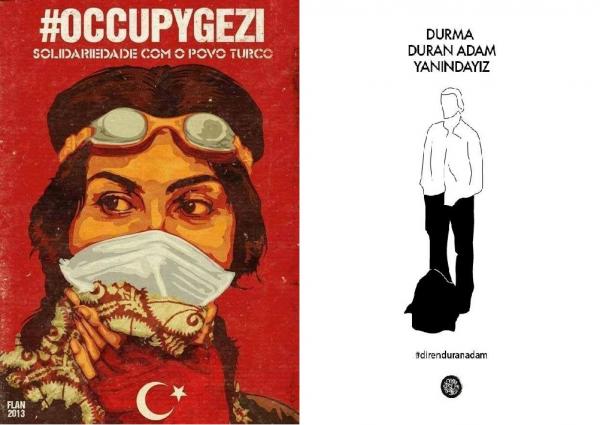 A striking feature of the Gezi protests was the speed of the protestors in responding to the latest events. Their response either came on the street by actively joining the protests or, on the web by distributing the latest news through social media. The digital poster above is a testimony to the speed of the protestors. On June 17, a man stood still for more than 7 hours straight in the middle of Taksim Square -a performance that ignited a row of ultra-pacifist demonstrations in different cities by standing still in public spaces. This specific image, although probably not the best one, was circulated in the social media the same night, just couple of hours later after he started his passive protest. Standing Man became such an iconic image in a matter of hours that the illustrator of this image does not require any details other than making sure that he has an untidy shirt, a backpack next to his feet, and hands in his pockets. The caption above reads, “Don’t stop Standing Man, we are with you,” and the hashtag below can be translated as #ResistStandingMan. 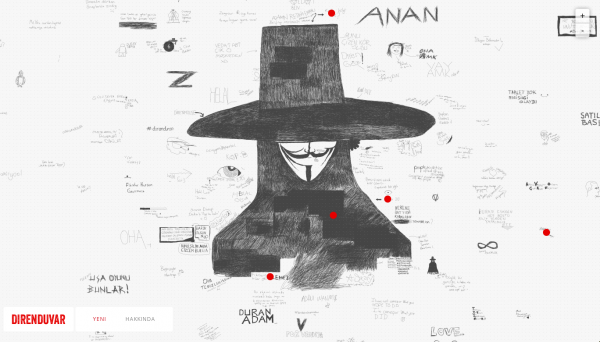 A website called DirenDuvar (translated as ResistWall) introduces an interactive online wall for protestors to write on, as freely as they do on the streets. Although this digital setting does not provide the powerful and immediate visual effect of a street wall in a public space, it is nevertheless an interesting experiment in the context of civil protests.

The digital image above features a 16-bit Turkish TOMA(an armoured police vehicle equipped with a water cannon) in Marioland which attacks Mario and others around him. The creative humour of the Gezi protestors plays with the graphics of the iconic video game Super Mario World to produce a ‘resisting’ Mario who gathers his usual enemies around him, this time to unite against the police. They are standing behind a haphazard barrier that is created by whatever there was nearby just as it was done in the real protests. This image is not only humorous but it also reveals the fact that the generation protesting right now grew up in a globalized world, playing video games and it is only fair for them to seek a change in their country which is run with a mindset that is not compatible with theirs.

Although the general style and tone of the creative responses to the protests have been colourful, playful, humorous and perhaps even naïve, the protestors met with brutal police violence which resulted in the death of 4 people, while thousands were injured, including those who have lost their sight. There have been different responses to the tragedies of the past weeks and one man in particular, Ethem Sarisuluk, who was killed by a policeman in Ankara, is honoured by a street artist in a quite impressive manner. 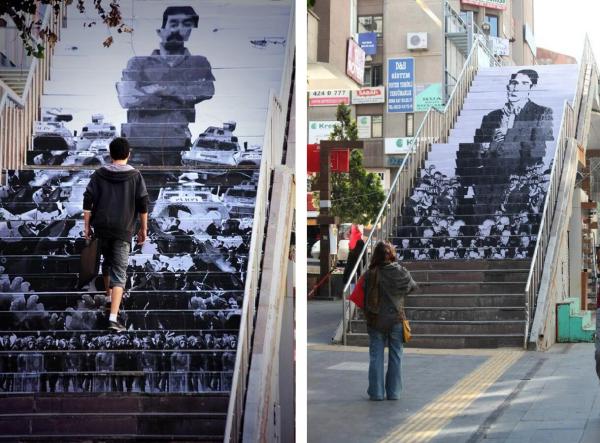 Ethem Sarisuluk (above left) was shot in the head and killed by a riot policeman during the protests. As the government tried to cover up his death, claiming that he was killed by rocks thrown to him by the protestors, Ethem became a martyr of the protests and a symbol of police brutality. After his death, a portrait of him appeared on the stairs of a pedestrian bridge in central Ankara, the capital. He towers above a group of TOMAs and a cramped group of riot police below. His defiant, and perhaps even carefree pose, is a reminder that the supporters of the Gezi movement will not forget him regardless of the government or the media.

However the portrait of Ethem was not the first one to appear on these stairs. Before Ethem, there was the portrait of Erdal Eren, painted on the same stairs, most probably by the same artist(s). Erdal was hanged when he was 17 years old without a fair trial. He was accused of killing a police officer during a demonstration in 1980. His date of birth was changed in order to make him eligible for capital punishment which required the minimum age of 18. Just like Ethem, his portrait towers above a group of military personnel and the repeated portraits of the army general who ratified his sentence. Although the work appeared before the start of the Gezi protests, this visual requiem was a prelude to Ethem’s, and possibly for the future victims of state brutality as well. These powerful images will be a reminder of the shameful events in Turkish history with the hope that people will never forget and repeat the same mistakes again.

Yaman Kayabali is a postgraduate student in the Art History and Museum Curating program of the University of Sussex. Prior to his studies at Sussex, he worked as a project coordinator in an exhibition design company in Istanbul. His area of interest is the relationship between art and politics. He is currently researching on the effects of political ideology on the early republican architecture in the new capital of modern Turkey with a comparative perspective of Turkey’s Western European counterparts. Yaman is currently an intern in the Research Department at the V&A.

Please note that the images used in this blog post have been freely shared online and on social media. They are not V&A images.