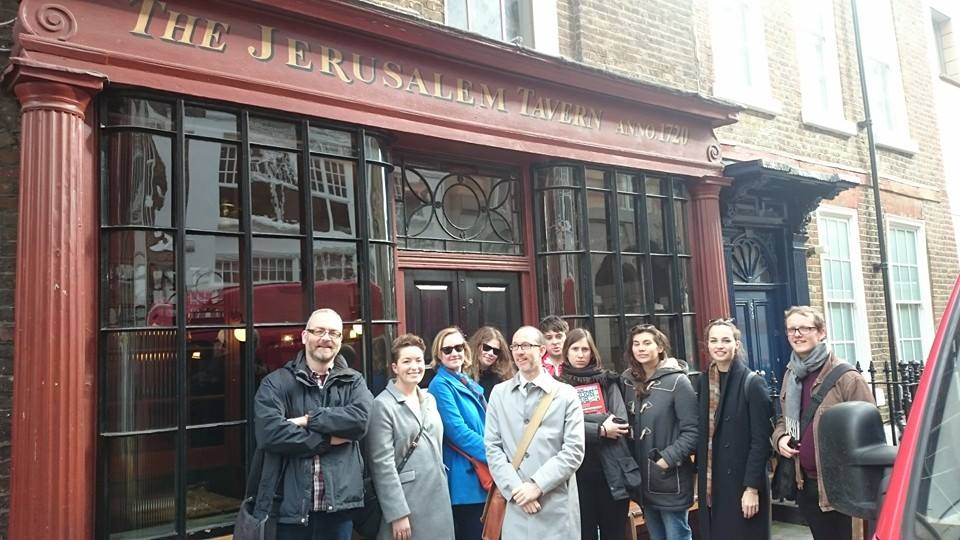 Who says intoxication gets in the way of learning? Current V&A/RCA History of Design student Magnus Copps describes a pub crawl like no other: one that stays completely sober until the very last stop.

As a second-year History of Design student – preparing a dissertation on a Lambeth pub that operated from the late 18th–early 20th centuries – a few weeks ago I had the unique and exciting opportunity to lead a group of five professional scholars, from three different disciplines, and five first-year History of Design (HoD) students on a very academic tour of some of London’s most historic drinking places.

The tour acted as the final session for a very successful course run as part of the HoD MA first-year programme, Material Cultures of Intoxication, led by Dr Angela McShane (Senior Tutor, Head of Early Modern Studies in History of Design, V&A/RCA, and Co-Investigator on the major AHRC and ESRC-funded project Intoxicants and Early Modernity) and co-taught with Nigel Jeffries (Post-Roman Pottery, Glass and Clay Tobacco Pipe Specialist, Museum of London Archaeology).

This included reading some of the most authoritative texts from a wide range of literatures, discussions of objects in the glass and ceramics galleries and one session handling archaeological assemblages held at the London Archaeological Archive and Research Centre in Hoxton; in particular, the pipes, glasses and bottles recovered from the sites of one 17th-century London alehouse and one 18th-century London inn.

For the tour, I was immensely relieved that my ‘on-the-ground’ knowledge of London’s drinking places was to be enhanced not only by the course leaders, but by two historical geographers who joined us for the day: Dr David Beckingham (University of Cambridge) and Dr James Kneale (UCL), both of whom have written extensively and influentially on the geography and regulation of drinking places in the 19th century.

The day was long, scholarly and unquestionably illuminating for all concerned. In all, we walked about 12km and visited 14 pubs between 10.30 and 6.00 (all of which can be seen on our twitter feed), and so for reasons of space what follows is the edited highlights!

We first assembled over coffee at The Fox & Anchor, Charterhouse Street, a rare (for London) Art Nouveau pub. We discussed the centuries-long importance of pubs to the work of Smithfield Market, opening in the very early mornings to serve the market porters, who work through the night and finish their working day when most of ours are just beginning. The present common licensing hours were adopted only from the 19th century, but in the past the opening of retail drinking places were often adapted to local patterns of work.

This pub’s unusual pewter bar also led to a useful discussion of materials and their shifting meanings in drinking spaces over time, while the profusion of booths and small rooms to be found in The Fox and Anchor helped us to begin thinking about how the internal spaces of public houses were often hard to police. By offering spaces for private and public drinking, retail drinking places presented a constant tension between moderate and modest behaviour, and the potential immorality of drinkers – especially where female drinkers were concerned.

Emerging from our first pub, the pace stepped up and we soon whizzed through a selection of the pubs in Clerkenwell, using a range of establishments dating from the 1720s (The Jerusalem Tavern) to the 1960s (The Shakespeare Tavern) to talk about how the form and use of drinking spaces has changed over time, notably the shift to purpose-built premises, the development of the service counter, mechanical beer pumps and so on, but were always considered central to the community – even newly built ones.

A quick hop on the Thameslink took us down to The Black Friar, a gem of a pub dating to the early 20th century lined in mirrors, marble and bronze friezes, the eccentric product of a speculative bubble in public house building in the early twentieth century. It owes its continued existence to Sir John Betjeman and we celebrated this triumph of culture over capital by stopping for lunch.

From the Friar, we wandered the twisting alleys and courts beside Fleet street which conform to medieval street patterns, pausing at Ye Olde Cheshire Cheese to talk about the deleterious effects on both health and morals these courts were believed to have (firmly established as they were in Lawyer territory) and a debate over which parts of the current building might actually have been used for drinking in the 17th and early 18th centuries (the current cellar became a dinking club only in the 20th century) before heading up to Holborn Viaduct.

This stop gave us an ideal point at which to think about the wider geographies of drinking places. Holborn was a major terminus for stagecoaches coming in from the Midlands and the west of England right up to the early 19th century. At least five separate coaching inns were built in the area to serve this mass of traffic. Changes in transport – particularly the railway – means that, though they are well represented in the historical record, no physical trace of these inns survive today; the last, The Old Bell, was demolished in 1897.

Holborn is also the site of what is considered to be the first ‘Gin Palace’; Thompson & Fearon’s opened at 94 Holborn Hill in 1831 (now demolished) – the licensed victuallers answer to the huge number of Beer Houses that opened after the 1830 Beer House act and threatened their business.

The first might not exist any more, but we traced a path through to the West End that took us past a string of glittering (heavily restored) Gin Palaces including The Princess Louise, New Oxford Street and The Salisbury, St Martin’s Lane, both fitted up with fine wooden fittings and glittering mirror glass and tiles.

This provoked a lively discussion about the way in which many historians have associated this kind of pub with widespread drunkenness amongst the working classes in the late 19th century, with considerable debate amongst our party about the strength of the evidence for this – or rather, whether different kinds of evidence (not least the material) and different readings of the usual sources might also reveal a more extensive range of drinking practices that were convivial rather than criminal. As if to emphasise the point, most of us stopped in The Princess Louise to drink a cup of tea!

Fittingly then, the next leg of the journey took us to The King’s Arms, Roupell Street, Waterloo. Here in what is now a desirable corner of south London, complete with charming cobbled streets of well-preserved 19th century houses, we talked about the area’s earlier reputation as the archetypal slum, as illustrated in Gustave Dore’s Over London by Rail, and whether or not any individual narratives could be recovered from beneath this pervasive historical view of poverty, both moral and material.

The home stretch took us east to Borough High Street where a quick look into the yard of The George Inn showed us the physical form that many of the great coaching inns of the 17th and 18th centuries took, with long galleries facing onto a central courtyard which was often the site of prize fights or theatrical performances, as well as numerous other activities beyond the run of the inn’s business catering to travellers and drinkers.

From here we headed south, to rest our weary feet, and to conclude our discussion over well-earned pies and pints in the Club-Room of The Royal Oak, Tabard Street (named for the Tabard or Talbot Inn, referred to by Chaucer); a pub that still boasts its original bottle and jug ‘offsales’ window. ‘Club’ rooms, like the one we finished up in, were developed in the late eighteenth century to cater to the many clubs and societies which sprang up in this period amongst both the working and the middle classes, and were often very well fitted up. Landlords were assured of decent sales on meeting nights, whilst members were saved the expense of renting their own premises.

The attraction, for me, of studying the history and material culture of drinking spaces is the way that, as the tour and this post show, it opens up the city itself as an archive: one that provides evidence for a vast period of time and will, I hope, inspire numerous ‘Material-Culture-of-the-Tavern’ studies to come.

Jane Sarah Morgan (born Plymouth 1815) who worked at the first Gin Palace at 94 Holborn Hill was one of the 1,499 remarkable women to sign the 1866 Women’s Suffrage petition- the beginning of the campaign for the vote. Elizabeth Tilly also signed there. Jane was working as a saleswoman from at least 1841 to 1861, she was retired by 1871 and died in 1872, leaving around £1,000. She must have been a committed employee!
I would love to see any images in addition to the architectural drawings that are available. Also what was it actually called? look out for 1866 petition exhibition at WomensLibrary@LSE from 23rd April!

It was simply known as ‘Thompson & Fearon’. As well as ‘on sales’ at the bar, it sold a selection of wines and spirits as ‘off’ sales and it also sold wholesale. There’s a very brief description of the bar in evidence that Henry Bradshaw Fearon gave to a Select Committee of the House of Commons in March 1830. You’ll find it here.
https://babel.hathitrust.org/cgi/pt?id=umn.31951p01104343e;view=1up;seq=120
pages 111–16
Henry Bradshaw Fearon and Samuel Thompson are respectively my 3 x and 4 x great-grandfathers

Thank you that is really interesting as a context for the women.