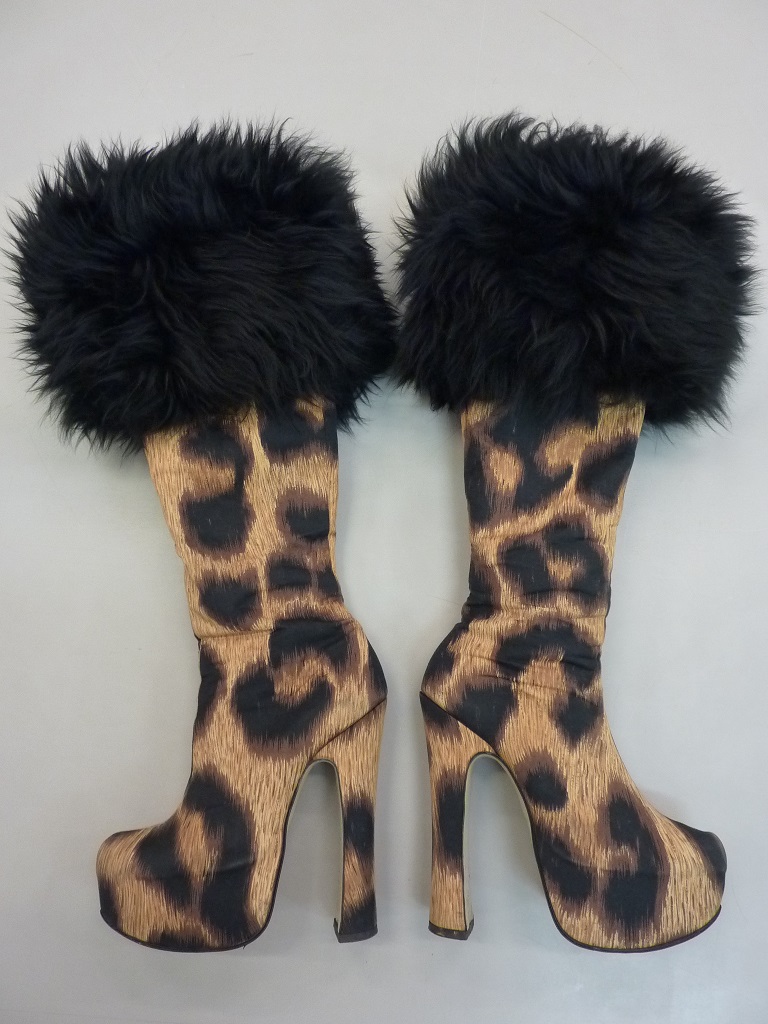 This article is written by Joanne Pilcher, a volunteer on the Shoes: Pleasure and Pain exhibition and student on the V&A/RCA History of Design course.

In my role as a volunteer for the Shoes: Pleasure and Pain exhibition I have been going through the acquisition files for all of the shoes and other objects that will appear in the displays. These are the folders of information which are compiled on an object or collection when it is acquired by the V&A. The purpose of revisiting these folders is so we can be completely certain that all donors or grants are appropriately acknowledged on the exhibition labels for the objects. This has been a fascinating task as I have encountered some quite funny stories of how some of the shoes were found. For example, this pair of seventeenth century mules was found at a football club jumble sale in the 1970s!

Several pairs of Vivienne Westwood’s shoes are appearing in the exhibition but perhaps my favourite pair are these leopard print boots due to the wonderful story behind them. These shoes were part of a large collection of Vivienne Westwood clothing which was purchased with the assistance of The Art Fund, the Friends of the V&A, the Elsbeth Evans Trust and the Dorothy Hughes Bequest. This collection was amassed and worn by Gerlinde and Michael Costiff who Vanity Fair branded ‘London’s king and queen of urban chic’. These boots give us an insight into the exciting world of London during the eighties and nineties.

Gerlinde and Michael met under a Coca-Cola advertisement at Piccadilly Circus in 1969; marrying and moving to King’s Road a year after Vivienne Westwood and Malcom McLaren had opened shop there. As Sonnet Stanfill points out in Punks and Pirates: The Costiff Collection of Vivienne Westwood, ‘a dynamic and fashionable couple, the Costiff’s personal histories, both as Westwood’s clients and contemporaries, corresponded in fascinating ways to the designer’s own’. One of the couple’s many business exploits was the creation of Kinky Gerlinky, a club night in London which Michael Costiff describes as a place of ‘glamour and fantasy’. Kinky Gerlinky was ‘one of the capital’s most outrageous club nights’ and these boots were probably worn there. In other interviews Michael has spoken about the importance of Westwood’s clothing for himself and Gerlinde as being part of their working wardrobe. Whilst they both loved the clothes, the avant-garde aesthetics were also perfectly suited for wearing to their Kinky Gerlinky club nights which Michael describes an event for men, women and everyone in between.’ Michael mentions that the leopard print outfit to which these boots belong is completely unique as Gerlinde picked out Westwood’s design and asked her to make it for her in leopard print; demonstrating the close relationship between the two women. Vivienne Westwood’s ‘Always on Camera’ collection was, in fact, dedicated to Gerlinde.

Kinky Gerlinky was an important part of the 1970s and 80s London club scene, with weekly themed nights where the best fancy dress costumes were sometimes judged by infamous personalities such as Leigh Bowery and Vivienne Westwood herself. To get an impression of the wild aesthetic, the Blitz Kids website has a selection of Kinky Gerlinky posters. Not merely proprietors, the Costiffs were heavily involved in this social circle and were known to partake in events such as Andrew Logan’s Alternative Miss World contest, which Gerlinde herself won in 1978. In this YouTube video of interviews with Kinky Gerlinky partygoers, Gerlinde is the first face to appear.

It is exciting to see how one pair of boots can provide an insight into such an interesting part of London’s history as a home for the sociable and fashionable; I look forward to finding more fascinating social-histories behind shoes in the exhibition