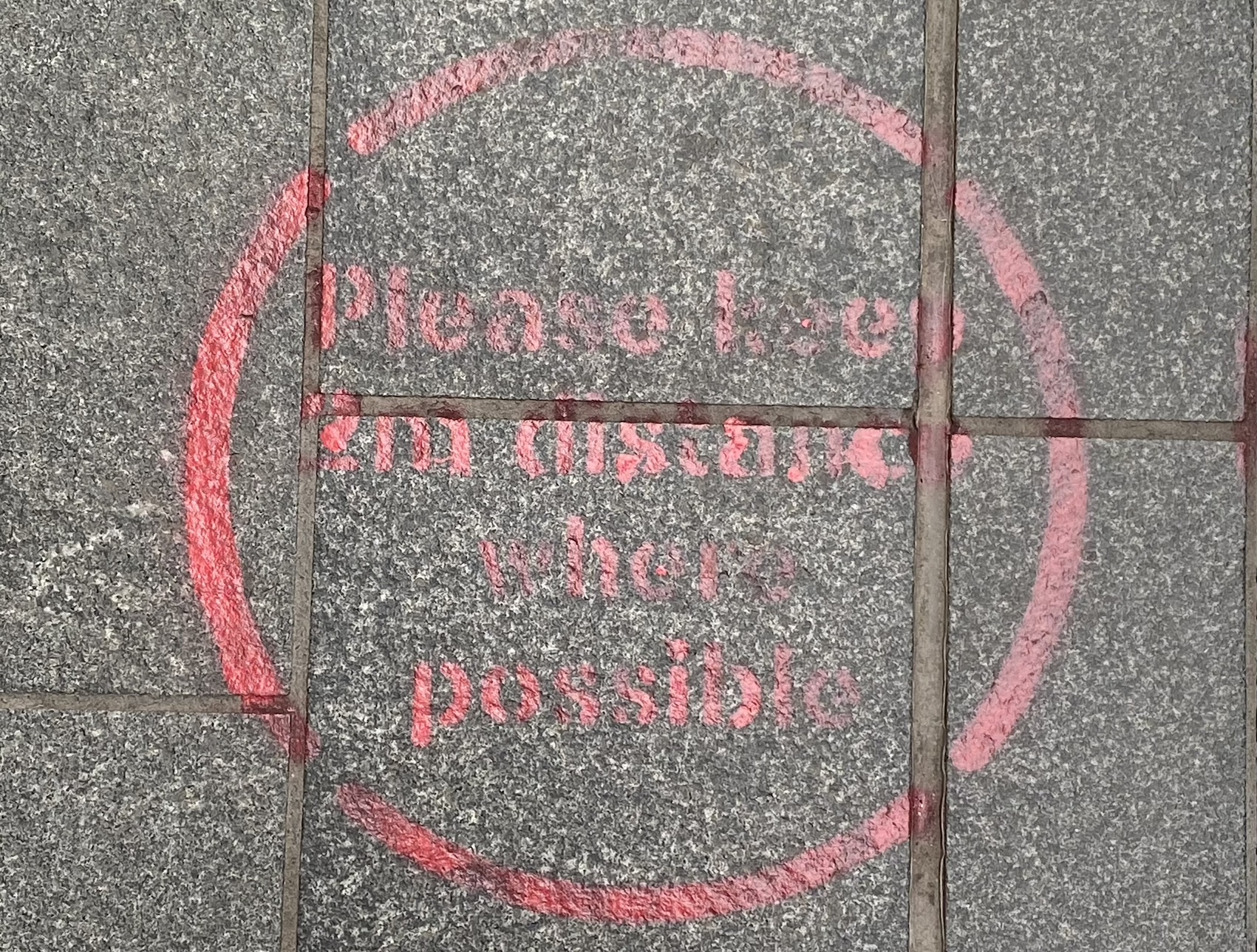 This is a special guest post from Priya Khanchandani, the incoming Head of Curatorial and Interpretation at the Design Museum. For the past two years she has been the editor of the design and architecture magazine Icon.

While at eye-level buildings loom large, the black asphalt and grey concrete of the ground generally fades into the backdrop, despite its ubiquity. During the pandemic, the ground has taken on a new resonance. The lack of preciousness that we associate with it – a site for dirt and the discarded – has made it an ideal canvas for creativity and ad hoc graphics. It has also become unmissable for communicating a new network of social distancing signs.

“KEEP YOUR DISTANCE” reads the green stencilled letters beneath my feet. The words are accompanied by symbols depicting a man and a woman separated by a double-pronged arrow. Like many areas of cities all over the world, the pavements of Newham, where I live, have been decluttered to create more space for footfall and new signage has appeared on footpaths. In certain spaces 2D graphics are accompanied by 3D barricades or cordons. The paint is already starting to fade from exposure to the elements. A thousand pairs of shoes have already trampled over it. Unlike most signs found in the public realm, these floor graphics are not intended to be permanent and tend to draw on materials that are readily available or already used for other purposes. Indoors, the markings extend to supermarkets, where people form orderly queues thanks to rows of 2m-distanced stickers decorated with footprint symbols. As more of the world gradually re-opens  – schools, offices and pubs – they are likely to be found everywhere.

Marking where we should stand, walk or lounge in public arguably manifests an apparatus of power and governmentality, which constantly mediates our interactions with our surroundings, even more so now. At their most appealing, however, floor markings are more than simply conducive to social distancing; they manage to embellish the experience and instill a sense of levity. Smiley faces on the playground floor of a primary school in France, for example, bring enjoyment to the unnatural experience of being shuffled around. 1.5m-spaced circles on the dance floor and queue markers up to the bar enabled 100 revellers at the Coconut Beach Club in Münster, Germany, to defy the notion that social distancing needs to be obverse to fun. Italian design studio Caret painted white squares onto the cobblestones of Piazza Giotto in Vicchio near Florence, creating a gridded layout marking how people should move around. Rather than being at odds with the Cinquecento-period architecture of the space, their squares form a pattern that is visually complementary, and allows for a multiplicity of different interactions with the piazza. All of these interventions are erasable, too.

The proliferation of the virus has brought to the fore the degree to which we are all interconnected, a concept that Bruno Latour framed as “network theory”. In a recent article for the French publication AOC in response to the pandemic, Latour summed this idea up by explaining, “Every entity on this same planet has its very own way of hooking up with each other and all the other elements that compose the collective at a given moment.” At a moment when we have been forced to confront our imperative to work as one society, floor markings that bring us together in new, safer networks are a reminder that none of us is a discrete or isolated entity. Through them, the ground has taken on a new resonance as a site for expressing the network and infrastructure we now rely on to be free.

‘Social distancing measures across the globe in pictures’, The Guardian, 29 May 2020

Translation of the above into English by Stephen Muecke.

In 1965, [Seiichi Miyake] invented the ‘braille block’, the first set of tactile paving tiles, which would eventually be adopted around the world as a way of aiding navigation for the visually impaired. These tactile paving tiles, or ‘Tenji blocks’ as they are a known in Japan, consisted of tiles with raised lines or domes (sometimes truncated) which are used predominately as ground surface indicators to aid blind and visually impaired pedestrians to stop and navigate crosswalks. The raised line pattern indicates a safe path along which a person can walk, while the dome pattern indicates that the person should stop. It was also decided to colour the tiles yellow so that they could also aid the partially blind.

In southern France, the manufacture of painted tin-glazed floor tiles seems to have been practised at isolated sites from the mid-13th century. Though relatively uncommon, these appear to have been the standard type of decorated tile in this part of France, where inlaid tiles are rare. This section of pavement, which comes from the collegiate church of Saint-Julien at Brioude, represents one of the earliest examples of the use of this type of floor tile.

Small carpets such as this with a single arch are sometimes referred to as ‘prayer carpets’ because mats are often used to define a person’s space during muslim prayer rituals. The arch is usually taken to represent the mihrab or decorative panel in the wall of a mosque which indicates the direction of Mecca. The pile of this carpet has been left relatively long and, as a consequence, the edges of the design are not very sharp. Cotton has been used for the white pile because it gives a clear white, whereas wool tends to have a more creamy colour.