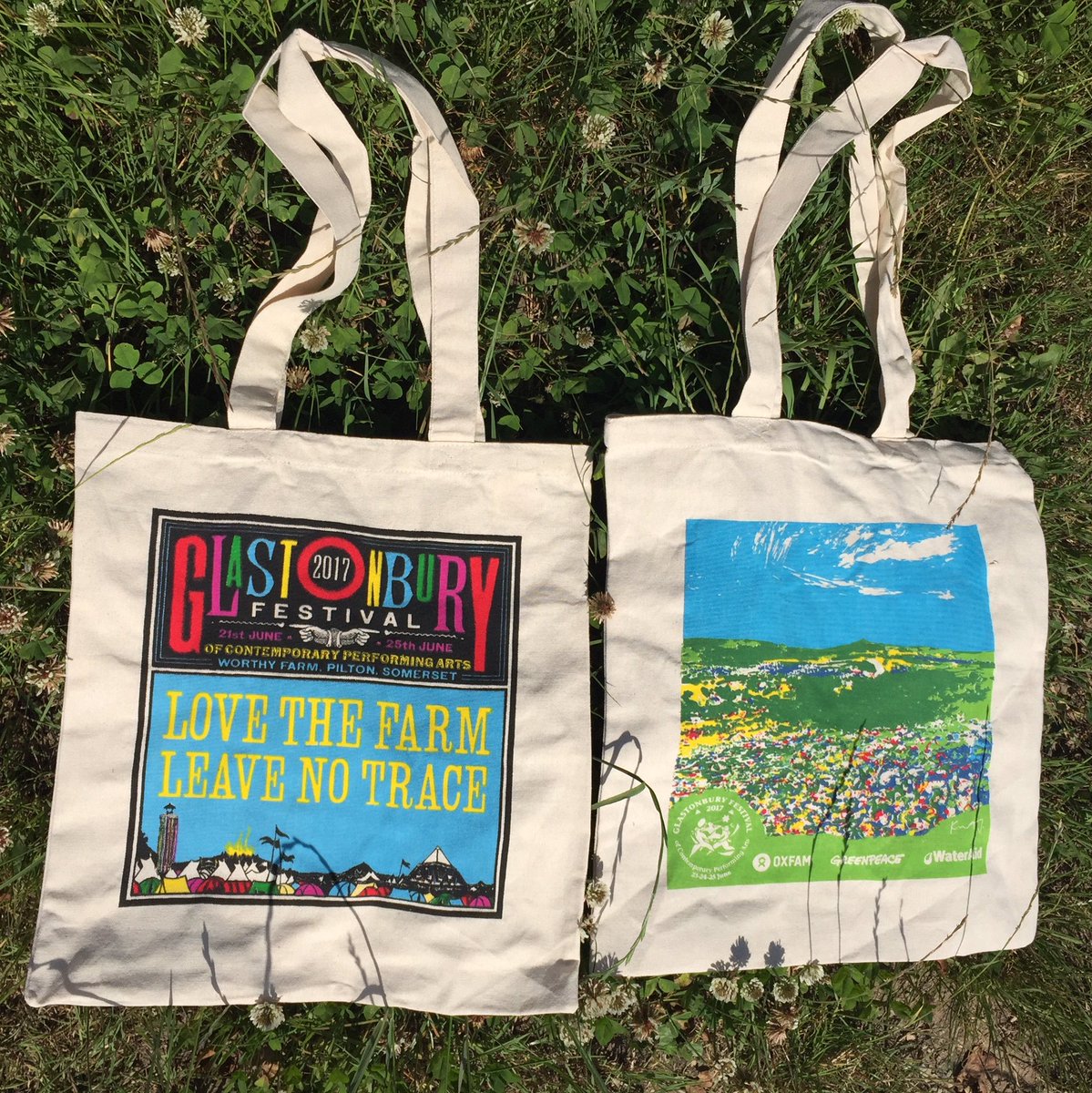 This post of Pandemic Objects coincides with the V&A’s celebration of the 50th anniversary of Glastonbury Festival. Since 2014, the museum has held guardianship of the festival archive which you can find out more about here.

The ubiquitous canvas tote bag – a staple of every household – has become an annual fixture of Glastonbury Festival. Given to attendees as they stagger through the final entry gates, often hung directly around their necks as hands and arms are occupied with tents, chairs and boxes of cider, the bestowing of the Glastonbury tote bag is a sign that you have finally reached the hallowed fields of Worthy Farm.

When this year’s festival was cancelled due to COVID-19, thousands of ticket-holders were left bereft and thousands of bags abandoned. Organisers Michael Eavis and Emily Eavis had hoped that the event would still go ahead with alterations to operations and hygiene standards. However, as the year progressed, the impact of Government Advice urging people to avoid public spaces and the task of building the infrastructure of the festival under social-distancing guidelines made such provisions impossible.

In line with the festival’s charitable ethos, Glastonbury donated all of its surplus hand sanitiser, gloves and face masks to the Avon & Somerset Resilience Forum which was distributed amongst emergency workers and NHS staff. Members of the crew assisted with the building of the NHS Nightingale hospital in Bristol, and the Glastonbury tote bag, now excess stock, found a renewed purpose as a wash-bag for NHS staff. The latter initiative was prompted by a call-out from fashion journalist Gemma Cartwright, who had seen an NHS worker asking for bags to wash her contaminated scrubs in. A fan of the festival referred them to Emily Eavis on Twitter and she responded directly. As well as being a charitable donation, it was a much-needed positive PR story for the tote bag.

Prior to the pandemic, questions surrounding the true sustainability of the tote bag were already circling due to the environmental impact of their production and distribution. New levels of scepticism were reached however during the pandemic, when studies arose arguing that reusable tote bags could ‘catch’ and spread the virus. US think tanks such as Manhattan Institute and Competitive Enterprise Institute advocated a return to plastic shopping bags. While the UK adopted this theory to a certain degree, removing the charge on plastic bags in supermarkets, it has been criticised for its accuracy and contradiction of the overall positive environmental outcomes of the lockdown. A representative from the British Retail Consortium (BRC) told The Independent, “there is little evidence to suggest risk associated with virus being spread via goods, so it is safe to use these items.”

The debate concerning plastic bags was picked up by Greenpeace, one of three organisations (including WaterAid and Oxfam) that Glastonbury Festival host onsite and donate significant amounts of their profits to. Greenpeace USA Oceans Campaign Director John Hocevar expressed concern that articles written by think tanks could be linked to right-wing non-profits and contain misinformation. Hocevar stated: “Industry groups have seen this crisis as an opportunity to exploit people’s fears around COVID-19 to push their pro-pollution agendas. Even in the short term, plastic does not inherently make something clean and safe, and we should not confuse corporate public relations with factual medical research.”

Just as with many other aspects of the pandemic, in which scientific fact becomes a matter of dispute, and the unexpected outcomes of the virus spark new designs and efficient re-purposing, the tote bag has also become a symbolic battleground for our future approach towards sustainability. In lieu of this year’s merchandise, Glastonbury have designed a new tote bag with all profits going towards Oxfam, Greenpeace and WaterAid.

‘Are Tote Bags Really Good for the Environment?’, Noah Dillon, The Atlantic, 2 September 2016.