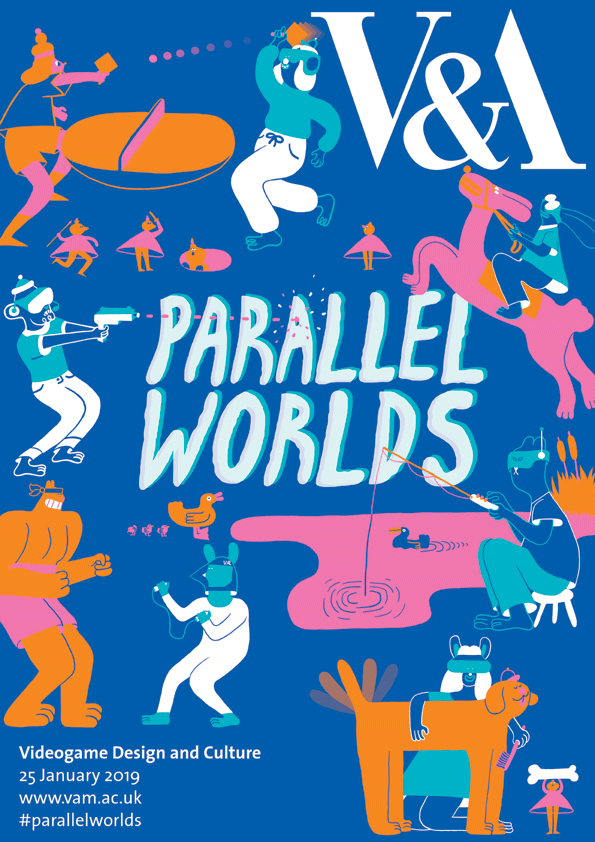 Parallel Worlds, the V&A’s conference dedicated to videogame design and culture, will be back for more critical conversations on Friday 25 January 2019, in conjunction with the V&A’s headline autumn exhibition ‘Videogames: Design / Play / Disrupt’. This day long international conference brings together talks from leading game designers, artists, engineers and thinkers on the design of videogames and playful immersive worlds.

Speakers include Chris Kujawski, Principal Designer of the Xbox Adaptive Controller; Amanda Johnston-Batt from Framestore’s rides team and independent game designer Jenny Jiao Hsia, whose work features in ‘Videogames: Design/Play/Disrupt’. You can find out more about our stellar speaker line up below.

The venue for Parallel Worlds is accessible by wheelchair. Further information regarding accessibility at the V&A and contact details can be found on our disability and access page.

The event will continue into the evening with a Friday Late looking at the future of videogame design and culture where you’ll be able to get hands on with a host of arcades, workshops and demonstrations across the Museum 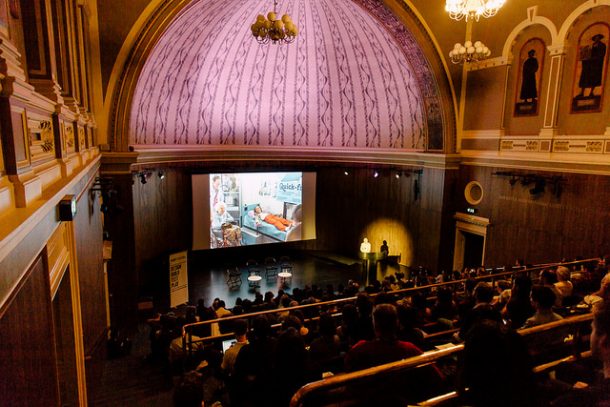 Rex Crowle  – Gamer Creator at Foam Sword
Rex Crowle makes animated-shorts and video games. Previously he was the Creative Lead at Media Molecule on Tearaway, art & design of LittleBigPlanet 1 & 2, as well as directing short films for Disney, MTV and the BBC. He’s currently playing at making a game with his friends Moo and Kenny.
foamswordgames.com

Mink Ette – Game Designer
Mink is a veteran of designing both real world and digital games; Ex-Hasbro, Ex-Punchdrunk, Ex-Six to Start, in 2014 she finally brought it all together with her ‘BA degree in the semiotics of woodwork’ by turning her hand to creating Escape Rooms.

Marie Foulston – Curator of Videogames,  V&A
A playful curator and producer with a love of the mischievous and the unexpected. Most recently she worked as lead curator on the V&A’s headline exhibition Videogames: Design/Play/Disrupt. She is also co-founder of the UK-based independent videogame collective Wild Rumpus where she has worked alongside partners including MoPOP, the Art Gallery of Ontario and the Game Developers Conference.
tigershungry.co.uk

Jenny Jiao Hsia – Lead Developer, Consume Me
Jenny Jiao Hsia makes video games on her own and in small teams. Her games have been featured at the IGF, Fantastic Arcade, XOXO, Day of the Devs, Amaze, and IndieCade. Jenny currently adjuncts at the NYU Game Center while continuing to collaborate with AP Thomson on Consume Me, a personal game about her experience with dieting.
qdork.com

Amanda Johnston-Batt – CG Supervisor at Framestore
Amanda Johnstone-Batt is CG Supervisor within Framestore’s Rides team, where she applies her skills in CG and VFX to an exciting slate of theme park attractions and environmental media. Prior to working on rides, Amanda accrued an impressive raft of credits in VFX, notable projects include Star Trek: Beyond, Godzilla and Thor: The Dark World. She has been part of three Oscar-nominated teams (The Curious Case of Benjamin Button, Avatar, The Golden Compass).

Natalie Kane – Curator of Digital Design, V&A
Natalie Kane is Curator of Digital Design at the Victoria & Albert Museum. She is co-founder of Haunted Machines with Tobias Revell, a curatorial research project exploring cultural narratives around magic and technology, and a visiting Tutor at the London College of Communications (UAL) and the Istituto Europeo Design, Barcelona.

Chris Kujawski – Principal Designer at Microsoft
As Principal Designer on the Microsoft Device Design Team, Chris has worked on products across all of Microsoft’s major hardware businesses. He joined the PC Hardware group in 2007, followed by Surface, and now Xbox, with a focus on handheld input devices. His specialty is collaborating with research and engineering to blend the world class ergonomics Microsoft customers have come to expect with the world class design Microsoft has become known for. A few of the recent programs he has led the design of are the Surface Precision Mouse, the Xbox Adaptive Controller and the Xbox Elite Controller.
xbox.com/en-GB/xbox-one/accessories/controllers/xbox-adaptive-controller

Jacob Mikkelsen – Game Director, IO Interactive
Jacob Mikkelsen is Game Director on HITMAN 2. Jacob have been creating AAA games professionally since 2003. He worked on several games in the Hitman franchise creating the missions, worlds and experiences that facilitate the unique freeform gameplay that the Hitman games are known for.
ioi.dk

Chella Ramanan – Games Journalist and Designer
Chella is a freelance games journalist and podcaster, writing for The Guardian and others. She is also the narrative designer for Before I Forget and Windrush Tales.
about.me/chella.ramanan

Becky Tyler – SpecialEffect Ambassador
I am 16 years old and I have quadriplegic cerebral palsy, which means it is difficult for me to walk, talk and use my arms or hands. I use a communication aid with eye gaze technology to speak. I’m a disabled young person who loves playing video games, such as Minecraft, the Sims and Pokémon. I have been using eye gaze technology for nearly 10 years, and this is how I access my computer to help me do lots of things. In 2014, I really wanted to be able to play Minecraft with my eyes, so I asked SpecialEffect for help and worked with Kirsty McNaught who developed the eye gaze interface for Minecraft (EyeMine). I hope many more videogames will become accessible to eye gaze users like me in future.
specialeffect.org.uk/eyemine

Kristian Volsing – Research Curator of Videogames for the V&A
Kristian Volsing is the Research Curator of Videogames: Design/Play/Disrupt. Based in the Design Architecture and Digital department of the Victoria and Albert Museum, his previous projects have included contributions to the development of the exhibition All of This Belongs to You; Rapid Response Collecting, an ever-changing gallery that explores the intersections between contemporary design, mass manufacture and global events and T-Shirts 101, a display on the history of the T-Shirt.

Moo Yu – Programmer at Foam Sword
Moo Yu is the programming half of Foam Sword, a London-based micro-studio working on Knights and Bikes. Before this, he worked at Media Molecule on LittleBigPlanet, Insomniac Games on the Ratchet and Clank Series, and Mind Candy on Moshi Monsters. Moo has served roles varying from programming to game design to product management in console, PC, mobile, and social gaming.
foamswordgames.com