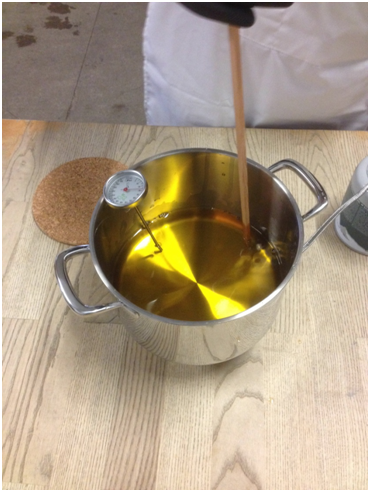 This post was written by second-year students, Sophie Châtellier and Matilde Audisio, members of a group of V&A/RCA History of Design MA students taking part in the ‘Thinking and Experiencing Techne’ seminar/lab in the spring term. One of its aims was to recreate a series of recipes from a sixteenth-century French technical manuscript.

On a chilly Monday morning, we gathered in the courtyard of Blythe House, one of the V&A’s largest storage facilities, to begin an experimental re-creation of a late sixteenth-century recipe for a varnish made with lavender spike oil. This was an early exploration in the course’s overall investigation of early modern artisanal practices through practical experimentation and re-creation.

We began by heating lavender oil slowly in a deep pot over a gentle flame. The perfumed scent of lavender oil permeated our ventilated cooking space. Despite our safety masks, this remained a prominent feature of our cooking experience.

When it began to hiss and bubble we cautiously added some sandarac, the type of resin listed in manuscript, obtained from Tetraclinis articulate, a small cypress-like tree. As the sandarac touched the simmering oil it melted almost immediately. We then added mastic, another form of resin and the final ingredient for the varnish, which also melted away with ease.

The recipe we followed gave no instructions about the quantities of ingredients needed. This was particularly interesting as it implied that the audience of the original recipe would have had a pre-existing idea of the approximate amounts or ratios of the ingredients used. Due to our lack of such pre-existing knowledge, conservators Dana Melchar and Nigel Bamforth made some informed estimates of the necessary quantities based on historical sources combined with knowledge gained through their previous experience with similar materials.

This was actually the second of two sets of very similar experiments, and we were not unfamiliar with the tools and set-up. We were impressed with how quickly our confidence in the handling of pots, flames, sticks, and ingredients had grown. This gave us a greater sense of the value and significance that experience-based learning and knowledge sharing would have had during the period when the recipe was written.

Click here for the previous blog from the ‘Techne’ seminar/lab series.

You can find out how to apply for 2017/18 admission to MA V&A/RCA History of Design here.