In November 2021, we held a four-day workshop on the Torrijos ceilings. This comprised a two-day symposium generously hosted by the Museo Arqueológico Nacional in Madrid (MAN), followed by two days of site visits to Torrijos and other sites of importance to the history of the lost palace and its furnishings. This post will give an account of our two-day symposium, and a later post by Mariam will describe our site visits.

The title of our symposium was ‘The Torrijos ceilings in the Global Museum’. We brought together experts from the fields of historic carpentry and construction, conservation, architectural history, local historians from Torrijos, heritage professionals and art historians to examine all aspects of the ceilings’ histories. The choice of speakers reflected the questions that we ourselves have about the Torrijos ceilings, and the hope that this group of experts could help us to answer those questions. The papers were delivered in a mix of Spanish and English, with a blend of in-person and online participants. We combined this with visits to actual ceilings within the museum and in Canillejas, on the outskirts of Madrid.

Our first session focused on the theme of construction. The V&A’s Victor Borges started us off with an introduction to the conservation of the Torrijos ceiling at the V&A, updating us on its particular features and on the work of the conservation studio.

Enrique Nuere and Javier de Mingo from LoBlanco followed with a comprehensive overview of the geometrical construction of wooden ceilings, noting the use of tools such as the cartabón or set square and the terminologies that were commonly used by medieval carpenters.

Historical wood expert Eduardo Rodríguez Trobajo (INIA-CSIC) explained the kinds of wood that were used in Islamic ceilings including cedar brought from North Africa, pine and poplar woods, and emphasised the material continuity between wooden ceilings made in Islamic and Christian contexts in Spain. Particularly interesting was the results of dendrochonological studies they have undertaken on wooden ceilings in the Alhambra, as well as wood identification analyses indicating that particular woods were used in particular locations in the construction, according to their material properties.

Ana Carrassón (Instituto del Patrimonio Cultural de España) focused in her paper on the painting techniques that were applied to wooden ceilings, including the use of metals such as tin, silver and gold. She will write about this in a future post in this series.

Furniture curator Nick Humphrey (V&A) finished the morning session with a paper exploring the possible sources for iconography on the ceilings in the tapestries and furniture of northern Europe, reminding us of the role of prints in the spread of such designs across Europe.

The papers in the afternoon sessions were on the theme of a wider context. Carmen López (Fundación Pública Andaluza Rodríguez Acosta) started off with reflections on the wooden ceilings of North Africa and al-Andalus including those of Nasrid Granada.

María Teresa Chicote (Universidad Nacional de Educación a Distancia, Madrid, and Crafting Medieval Spain research assistant) considered the evidence for how the ceilings might have been viewed within a Castilian context, highlighting contemporary descriptions of ceilings.

Fernando Marías (Universidad Autónoma de Madrid) expanded on this theme with an overview of the architecture of the town of Torrijos, and its importance in Castilian culture.

We finished this intense and very informative day with a guided visit to the 15th-century church of Santa María la Blanca in Canillejas in the eastern suburbs of Madrid. Led by the very knowledgeable Alberto Calvo, this special tour allowed us to view the extraordinary carved wooden ceiling that was uncovered and restored there in recent years. Read more about the discovery and restoration of this ceiling here.

The second day of the symposium began with a visit to the Torrijos ceiling on display in Gallery 26 at the MAN, led by curator Beatriz Campdera (this will be the focus of our next blog post). This impressive ceiling is one of the ‘sisters’ to the V&A ceiling, and despite their many features in common, its ‘media naranja’ (half orange) form gives a different impression from the octagonal form of the V&A ceiling, which we discussed at length under the ceiling’s canopy. It has been suggested that this spectacular ceiling might once have crowned the palace’s chapel.

The morning continued with papers focusing on the town of Torrijos, its palace and the other important buildings constructed there in the early 16th century. Julio Longobardo and Justiniano de la Peña (Asociación Amigos de la Colegiata de Torrijos) placed the history of the now lost palace of Torrijos within the context of a town that was of growing wealth and importance in the late 15th and early 16th centuries.

María Judith Feliciano (independent scholar) drew our attention to the extraordinary musical dimensions of the façade of the Colegiata de Torrijos, the church built by Teresa Enríquez (also one of the patrons of our ceilings) in the early 16th century. She reflected on the acoustic potential of wooden ceilings like the group we are studying and what musical activities could have taken place beneath them.

Nicolás Torres and Fernando Aceituno from the Ayuntamiento de Torrijos (Torrijos town council) gave a comprehensive account of the conservation work being undertaken by the council on the many historic sites within the town, which helped to set into context the palace that once housed our ceilings. This also provided really useful background for our site visits later in the week. Showcasing the council’s restoration of the town’s heritage, they emphasised the importance of maintaining the everyday function of historic buildings within a community for their long-term maintenance and survival.

Before lunch, MAN curator María Ángeles Granados very kindly showed us two tile panels made at Talavera de la Reina in the mid-to-late 16th century, which might well have come from the Torrijos palace. They would have dated from a restoration of the palace some seventy years or more after the creation of our ceilings. It is interesting to us to consider the wider setting of the ceilings and the aesthetic of the original palace as a whole.

A particular highlight of the whole workshop was when the Crafting Medieval Spain project team was allowed to enter the tiny area that allows you to view the reverse of the MAN’s Torrijos ceiling – the patchwork of different wooden elements from which it was constructed was mindboggling!

The final session was dedicated to the dispersal and collecting of the ceilings. Anna McSweeney (Trinity College Dublin) spoke about the Torrijos ceiling now in the Château Villandry in the Loire, which was acquired in the 1920s by the chateau’s owners Joachim Carvallo (grandfather of current owner Henri Carvallo) and Ann Coleman, who installed it in a purpose-built ‘oriental’ style room.

Mariam Rosser-Owen (V&A) detailed the acquisition of the ‘Arab roof’, as the Torrijos ceiling was called, by the V&A in 1905, bought from Lionel Harris and the Spanish Art Gallery.

María José Martínez Ruiz (Universidad de Valladolid) took us beyond Torrijos to the international market for Spanish ceilings in the early 20th century, highlighting the role of US buyers in the acquisition of Spanish antiquities on a large scale.

Sandra Williams (University of Michigan) expanded on this theme with a paper about two Spanish ceilings now at the LA County Museum of Art, revealing the role of magnate William Randolph Hearst in their acquisition, and the way that Spanish missionary heritage in California and the rhetoric of conquest were influential in the spread of a Spanish architectural style in early 20th-century California.

Finally, Thomas Wu (Fine Arts Museum of San Francisco) closed the symposium with a paper on the acquisition of the fourth of our sister ceilings, now in the Palace of the Legion of Honor in San Francisco.

The workshop as a whole was small and informal and we learned a huge amount from all our speakers’ presentations, and from discussion and information-sharing in our very collegial coffee and lunch breaks, held at the nearby Café Gijón.

The papers presented certainly helped us to better understand the Torrijos ceilings in all their aspects; they answered questions and clarified uncertainties, but also raised new ones. We look forward to continuing the debates!

Some of these speakers will come back together again for the session we have organized for the upcoming Association for Art History annual meeting. This conference will now take place fully online, and our panel will be on the morning of 7th April. Come and join us there? 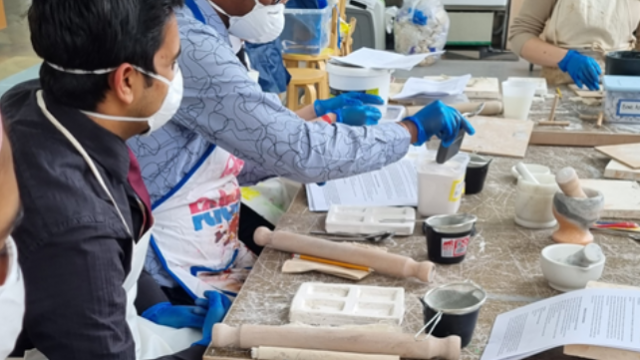 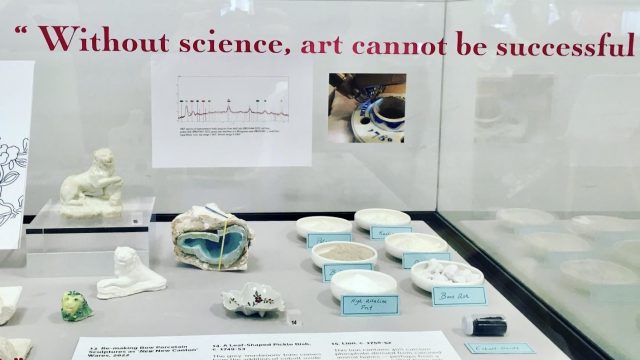