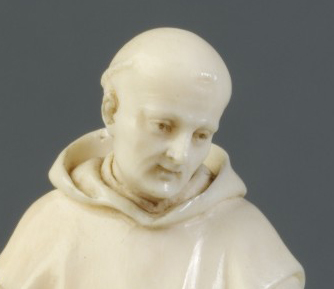 Today is a feast of St. Bruno (ca. 1030-1101), a very, very holy chap who was teacher to one of the most important figures of the middle ages: Pope Urban II, the instigator of the First Crusade. This 11th century eremitic scholar-man was also the founder of the Carthusian monastic order. If you’re wondering what a Carthusian looks like, look no further than these dolls from the Textiles and Fashion Collection, part of a collection of dolls featured in my recent post about St. Ignatius of Iyola.

Despite the sweet appearance of the dolls, the Carthusians were a particularly austere order, whose level of influence from their ascetic practices and, therefore, perceived holiness, far outstripped their numbers. At their height there were only 9 Carthusian priories (called Charterhouses – as in the Charterhouse) in England. When compared to the number of Benedictine (139) and Cistercian (88) houses, this number is very small, but they punched far above their weight in terms of spiritual achievement. I suppose you had to be serious about the Word if you wanted to be a Carthusian. In any case they got off to a very good start due to the excellent reputation of their founder.

Bruno was educated at Reims and Cologne, returning to the former in 1056 as a teacher. His quiet life was disturbed by the naughty Archbishop Manasses, whose alleged abuses of his position saw him suspended from office in 1077. Naturally very angry, Manasses took it out on his accusers, one of them being Bruno, tore down their houses and sold their possessions. Bruno prudently avoided Reims thereafter and set off with several companions in 1084 to live a simple, devoted life of prayer and manual labour in the forested, mountainous land of the Chartreuse.

Unfortunately, this first foundation was flattened by an avalanche within its first 5 years, so a second was built, sensibly further down the slopes. In 1090 Bruno was summoned to Rome to act as a Papal advisor, living, somewhat ironically, in a cell in the ruins of the Baths of Diocletian, one of Christianity’s greatest bogeymen. He died in 1101 but was not formally inscribed on the General Roman Calendar until 1623. He had long been considered the patron saint of Calabria, however, where his second foundation was built at La Torre. Since the 18th century, the Carthusians of Grand Chartreuse, the main house, have made a bright green liqueur supposedly based on an ancient recipe. Bruno is also, apparently, patron saint of trade marks.™

This little 19th century ivory statuette shows Bruno standing wearing his Carthusian habit. It seems to be the only appearance of Bruno in the V&A collections. In art he usually holds a skull and a lily, but has instead here another symbol: a discarded mitre at his feet, the sign of his refusal of the bishopric of Reggio.