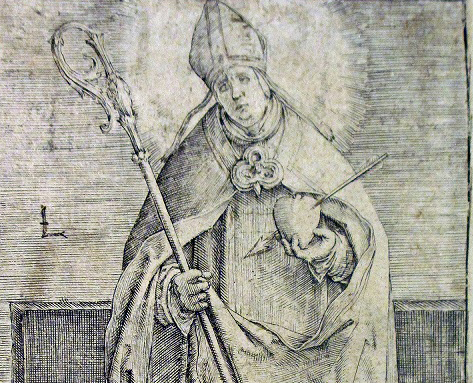 Martyrs have been martyred in some awfully creative ways. Last time around we learnt how St. Eustace met a sticky end, roasted alive inside a brazen bull. St. Fausta was sawn in half inside a box, St. Bartholomew was skinned alive and St. Alphege was pelted with cow skulls. Truly, these are horrible ways to kill someone; If directors of horror films are looking for inspiration, they should read more saints’ vitae. Although, in contradiction to this, I have also always felt that credit should be given where it’s due (and most of the time these stories are not true anyway). So with reluctance, my hat goes off to the macabre minds which came up with such gory termini for their fellow humans after the failure of inter-faith dialogue.

Gerard Sagredo was born in Venice in 980. He felt the hankering for the secluded life and became a Benedictine monk. Like many people of his time he attempted to go on pilgrimage to Jerusalem, but was waylaid in Hungary by King St. Stephen (whose hand can be visited in the basilica in Budapest – if you put money in a slot it lights up like a pier attraction). Stephen, turning on his holy charm, persuaded Gerard to remain in Hungary to help him convert the Magyars, and so the ‘Apostle of Hungary’ made himself busy missioning to the unbelievers.

Things rather hit the fan after Stephen died in 1038: there followed a revival of paganism across Hungary. Gerard was martyred in 1046, rolled down a hill inside a barrel lined with spikes, his killers earning top scores for their ghastly creativity. He got his own back, though, and has been patron saint of the city of his death ever since. His feast day is 24th September.

The saint is represented here in a tiny engraving made in the early 16th century, which may be seen by appointment in the Museum’s Prints and Drawings Study Room.