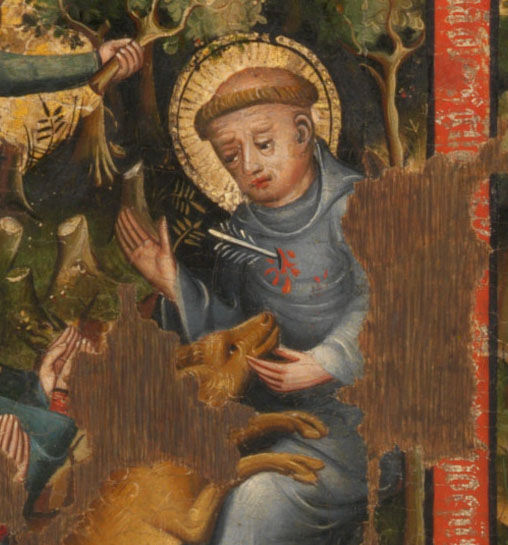 Perhaps the most popular vegetarian of the middle ages, semi-legendary St. Giles has had very little time to enjoy himself in heaven since his death in the first quarter of the eighth century. Indeed, many diverse groups consider him their patron saint; spur makers, disabled people, horses, beggars, blacksmiths, sufferers of breast cancer, breast-feeding women, cancer patients, Edinburgh, epileptics, noctiphobics (people who are afraid of the dark), forests, hermits, lepers, sufferers of mental illness, outcasts, poor people, rams and people who are sterile.

Giles is traditionally said to have had his beginnings in Athens, but was more likely born in Provence. In a classically ascetic move, he lived as a hermit in a cave in the woods outside Nimes. His only companion in his sedentary lifes was a deer who nourished him on her milk (let’s assume he owned a bucket). One day she, his deerest companion (boom-tsh), was pursued through the woods by the local king, Wamba, and shot at. Giles, seeking to save his companion, hurled himself in front of his ruminant pal and was badly wounded by an arrow. King Wamba, by way of repentance, and with much insisting, built Giles an abbey, around which the commune of Saint-Gilles would later grow. Sadly, it is not known if King Wamba had an elder brother named Chumba.

A later strange tale runs that while Giles was saying mass at the altar in his new abbey, an angel swooped down and deposited a document containing a description of Charlemagne’s ultimate sin, which was so bad he dared not to confess it to anyone. Fortunately for Chuck, Giles, being extremely holy, forgave him despite the enormity of the sin. This story is clearly apocryphal (from wherever you are on the religious spectrum) since Charlemagne was not born until around 20 years after Giles’ death. The episode is shown below on this Flemish altarpiece dated to about 1400.

Saint Giles was one of the most popular saints of the middle ages, in England alone more than 160 churches were dedicated to him. His popularity stems from the diversity of his charges, who are largely people who suffer some an affliction of some kind and who would wish for saintly intercession by way of relief. Quite why he is patron saint of two species of ungulate remains elusive to me, although I would assume the smithy-connection would account at least for the horses (but following the trail further, why blacksmiths?). He became quite renowned for his post-mortem miracles and is among the elite team of interceding saints known as the Fourteen Holy Helpers. Each member of this group  has a specific strength (like the Avengers do) and they could be called upon in times of need (again like the Avengers) to intercede against various illnesses.

St. Giles is usually depicted in art along with his attentive deer, either cradling it lovingly or heroically diving between it and a flying arrow. Often he has the shaft of the warhead shown sticking out of his leg or chest.