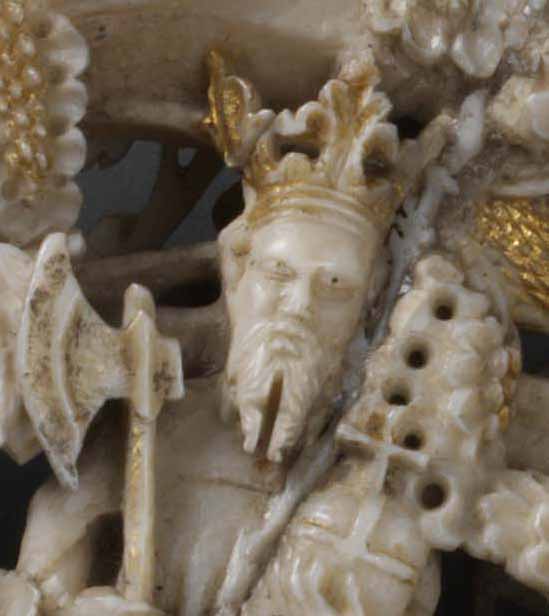 Saint Olaf (Eng: Olave; b.995, d.1030), or to give him is full name, King Saint Olaf II Haraldsson, was King of Norway, 1015-1028. Unusually for a saint (but not necessarily for a medieval king, or a Viking for that matter) he was an extremely violent man. Missionary attempts that he conducted in remote parts of Norway were characterised by bloodshed and forced conversion, and he was very unpopular amongst his subjects and his enemies. It might seem strange, then, that he was proclaimed a saint only a year after his death.

Norway had had Christian rulers as early as the 920s (Haakon the Good), but somehow Olaf managed to capture the imagination of the relatively young Christian community, and his legend has given Norwegian nationalists something to rally behind throughout the centuries. He had been baptised in 1010 in Rouen, which being the principal city of Normandy was essentially a successful Scandinavian plantation in Northern France, with Christian Dukes. Up to this point he had lived the life of a teenage Viking, raiding in England and the Baltic. After his conversion he assisted the Anglo-Saxon King Æthelred II ‘the Unready’ regain his throne after the death of the wonderfully-named Danish King Sweyn Forkbeard. This act probably did not endear him to Sweyn’s son, Cnut the Great, who gained the thrones of England and Denmark in 1016, and who would later dethrone Olaf in 1028, leading eventually to his ‘martyrdom’ in 1030.

Olaf’s alleged martyrdom, which happened during an attempt to regain his lost throne, is the basis for his beatification and for his stature as the celebrated champion of Norwegian national independence. After Olaf was ejected by Cnut (who was also a Christian, and with the support of Olaf’s own people), he attempted to reclaim his throne by force at the Battle of Stiklestad, where he was killed. Grimketel, an English bishop who originally had responded to Olaf’s call for missionaries around 1015, was still in Norway at the time of his death, and declared him a saint on 3rd August 1031, claiming that his remains were miraculously uncorrupted. Nidaros Cathedral, in modern day Trondheim, was erected over the site of his burial.

The changing perception of Olaf is evident by his nicknames. During his lifetime, he was known as Olaf the Fat, or Olaf the Stout. These days, however, he is called Olaf the Holy. The wider Catholic Church did not officially recognise him as a saint until 1164, following reports of miracles at his tomb. He is recognised as the patron saint of Norway, the Faroe Islands, carvers and difficult marriages. His feast day is 29th July, the day of his death.

Olaf is shown here on one side of a bishop’s crozier, currently on display in the Medieval and Renaissance Galleries. A crozier, known in plainer English also as a “shepherd’s crook” symbolises a bishop’s responsibility to their ‘flock’. The crozier is made from walrus ivory and it dates from the latter part of the 14th century. It has been repaired with bone at some point, in common with many ecclesiastical objects which are frequently reused and repaired over the course of decades and centuries. Interestingly, the chap on the other side of the object, Eysteinn Erlendsson, second Archbishop of Nidaros, probably wrote the 12th century text which described the life and miracles of St. Olaf.