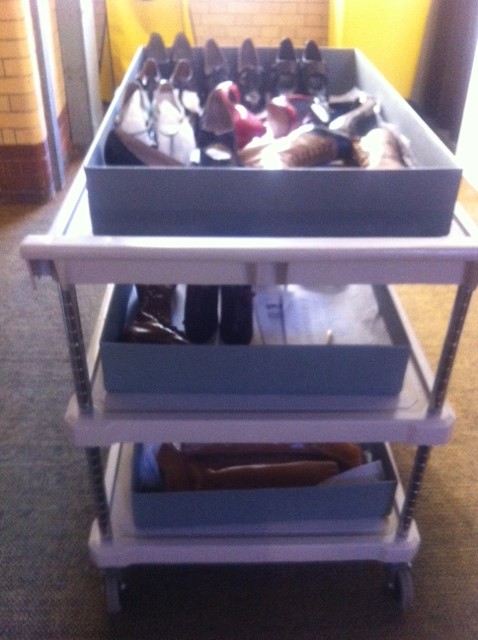 Lionel Bussey collected women’s shoes from about 1914 until his death in 1969, when he had acquired about 600 pairs. All the shoes were bought new from fairly good class shoe shops, like Dolcis and Lilley & Skinner, many were not even uwrapped, still boxed up with their bills. He took his collection seriously and he wanted them to go to museum collections. The V&A accepted fifty pairs of his collection (T.279 to 329-1970), while the others went, among others, to Northampton Museum and Brooklyn Museum.  There will be a section on shoe collectors in the exhibition “Shoes: Pleasure and Pain”, where Mr Bussey of course have an obvious place.

Out of the fifty pairs of shoes, we had to select fifteen to be included in the exhibition. This selection should show the range of Mr Bussey’s collection and his wide taste in ladies shoes. Interestingly, his collection represent almost all types of fashionable shoes throughout the fifty-year period he collected – with glaringly exception of wedges. Perhaps it is true that men just don’t find wedges sexy, or attractive enough even to collect. The shoes are also in different sizes.

As the shoes never been worn, they are, mostly, all in good condition (some have material breakdown due to use of early plastics), so we were not really restricted by that. We picked footwear that represented each decade, which with hope also will look nice together in a display regarding colours and shape. Quite a few of the shoes are brown though, and from the 1930s – he seems to have particularly liked the extreme high heels of that period.

Now we need to find out more about this Lionel Bussey. Who was he, and why did he systematically collect wearable shoes, and then not wear them? Of course I cannot help thinking that fetishism might have something to do with it. The fetish object, here a shoe, can act as a ‘magic charm’, that enables the male (fetishists are generally men) to achieve sexual satisfaction. However, saying that, adult collecting have historically been dominated by economically privileged men, but that usually involved traditional things such as works of art, cars, tin soldiers and not shoes. Even less so unworn women’s shoes. For whatever reason Mr Bussey collected all these shoes, we are extremely grateful. They add significantly to the V&A shoe collection, clearly demonstrating the changing fashion styles of the first half of the twentieth century. The Bussey collection also contain some of the most spectacular and beautiful shoes in the V&A.

More on Shoes: Pleasure and Pain

The art and craft of shoes

I thought it was important to give shoe designers and shoe makers a voice, to let them talk about their visions and craft in the exhibition Shoes: Pleasure and Pain, and not only...

Second year student on the V&A/RCA History of Design MA, Joanne Pilcher takes us behind the scenes of the installation of the exhibition ‘Shoes Pleasure and...

All that glitters is not gold – or is it? 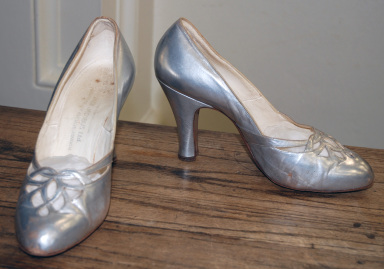