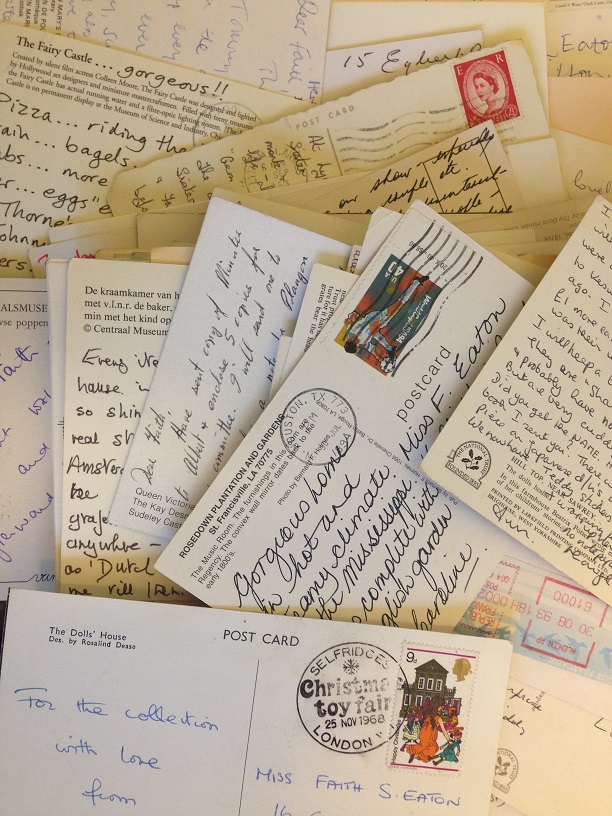 As Eloisa mentioned in her last post, we’ve spent days looking through and sorting out hundreds of Faith Eaton’s postcards. Whilst doing so we’ve enjoyed and considered the sense of history retained in these cards – and their varied and wonderful images. 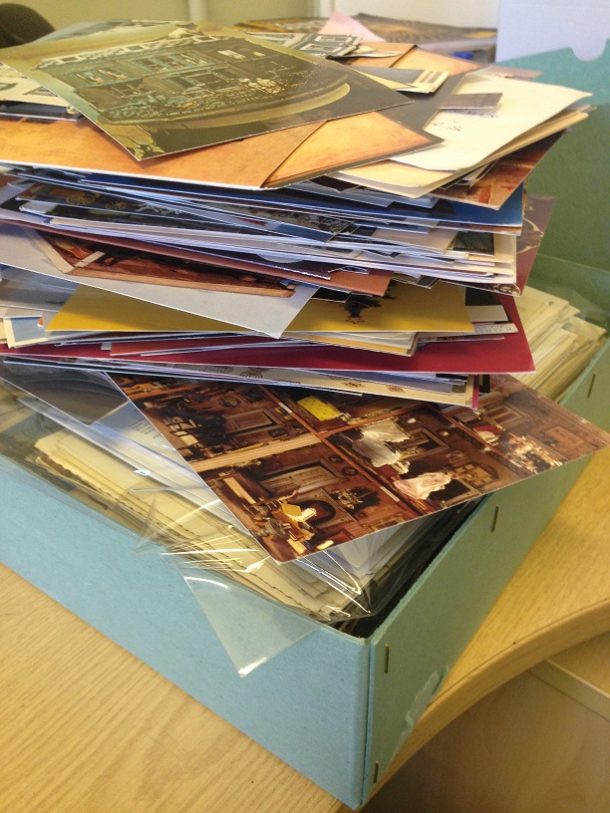 As Eloisa and I handled each postcard, looking at their images and reading the text (though admittedly with not enough time to read them all), we considered how different and less satisfying it would be if we were looking through someone’s 21st century personal correspondence – which for the most part would be on email or captured on social media sites. We would have been once-removed from the history and the life of the correspondence and I don’t think it would have been nearly as much fun since part of our enjoyment has come from deciphering handwriting, scrutinising postmarks for dates and looking at stamps from 50 odd years ago. 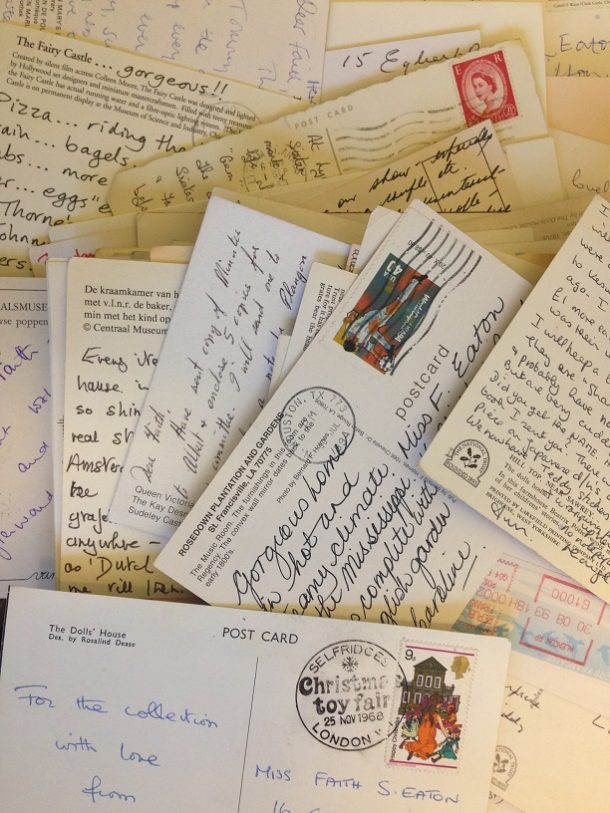 Looking through the piles of postcards, we felt privileged to be party to the emotional connection between sender and receiver. There were lots of thank you cards from a day spent with Faith: “What a splendid start to the New Year to be able to see the incredible diversity and depth to your collection. It was extremely kind of you to be so generous with your time”. We also came across many postcards from friends about holidays, health and interesting doll related finds in sales and museums across Britain and the world. They revealed a passion shared by post “I’m sure you know this collection of miniature things – so lovely” wrote one friend to Faith in 1978, “I thought of you and hence this postcard.”

A great number of the postcards had no correspondence but what all had in common was that each was chosen and kept by Faith for the image, as well as any message. Postcard after postcard revealed fascinating collections of dolls and dolls’ houses from around the world, spanning a couple of centuries of doll making and collecting. Some we flicked through quickly whilst others grabbed our attention for longer as we shared a particular image or sentence that caught our eye.

What particularly stood out for me were the postcards showing intricate interiors of dolls’ houses. The attention to detail of objects made to inhabit this miniature world of dolls is phenomenal and they fascinate me as much now as they used to when I owned a dolls’ house – even though the furnishings I played with weren’t nearly in the same league as any I’ve come across here!

Postcards from the Poupee Tendresse Collection in Paris illustrate this well and I spent a long time studying the tiny objects housed in this Georgian room and the straw goods, plants and cats inhabiting the French shop.

Postcards were sent to Faith from Germany, the USA and Holland, along with a large number from within Britain. The postmarks and images showed us the extent of the international interest in dolls’ houses, whilst the messages reinforced what we’re discovering about Faith being a key part of this worldwide network of doll experts.

These two postcards stood out for me as they show beautifully designed home ware made for dolls’ houses on opposite sides of the world: a collection of 1/12th scale Blue Willow pattern china plates on an English dresser and Japanese lacquer ware and screens.

More contrasts in the next two postcards, which I like because they show the attention to detail of dolls’ furniture from different centuries. The metal and plastic furniture is from around 1935 whilst the intricate wooden cabinets house miniature Staffordshire figures and are made in a style popular a century earlier.

The next few postcards of interiors and dolls captured my imagination with their everyday scenes from around the world, replicated with such care. They made me marvel even more about the skill of the makers – and their need for very steady hands! 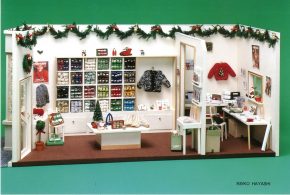 While looking at the following postcards I realised I’ve never really seen, or considered, that dolls’ houses were made in this way – as individual, compact and portable scenes of domestic and business life.

This first postcard of a butchers’ shop is from Faith’s own collection, the second from Christie’s.

What does the writing mean in this delightful postcard of a German schoolroom? It’s another engaging scene with every detail considered, right down to the flowers on the school teacher’s desk and the wooden abacus and inkwells in the desks.

Occasionally, when Eloisa and I were looking at some of the postcards of perfectly replicated dolls’ house interiors we found it hard to tell whether they were full size or miniature. Faith’s postcard collection also has postcards of room interiors from British stately homes, so we played a guessing game on each other – full size or miniature? The carefully crafted dolls’ house interiors were often so accurate and detailed that yes, we sometimes got it wrong!

Whilst coming across the cards shown below, it made me consider the sense of scale and how much of the world of dolls and dolls’ houses is related to scale; people and objects are miniaturised but a varying scale also exists within this world. This is evident from all the houses shown in Faith’s collection of postcards and for me, on a personal level, from the many different dolls’ houses I see on display within the V&A Museum of Childhood and in the current Small Stories dolls’ house exhibition. I found it fascinating viewing these postcards of large scale dolls’ houses alongside the postcards of the small, individual dolls’ house scenes.

And the next two postcards of large dolls’ houses stood out for me because they replicate existing buildings. The first one is a hotel in Washington, dated 1903 on the cornice; the second a dolls’ house built in 1897 for a four year old Miss Graham Montgomery and based on the owner’s old home in the South of England. What a lucky young girl to own such a magnificent dolls’ house.

There was excitement when we found several postcards showing the interior of the Bethnal Green Museum, as the V&A Museum of Childhood was known until 1974. The first postcard shows a sketch from the opening day in 1872, the second is of the interior a hundred years later, in 1972. The third image is a photo of the museum as it is now which shows just how much the interior has changed in almost a century and a half. These images are a poignant reminder of Faith Eaton’s connections to the V&A Museum of Childhood and its dolls’ house collections. 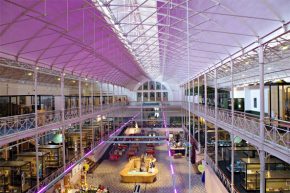 I’ve really been captivated by the images in Faith’s treasury of postcards. This small selection gives a taster of what’s in Faith’s collection and we may share more in future postings since it’s been very difficult to limit ourselves to just these few!