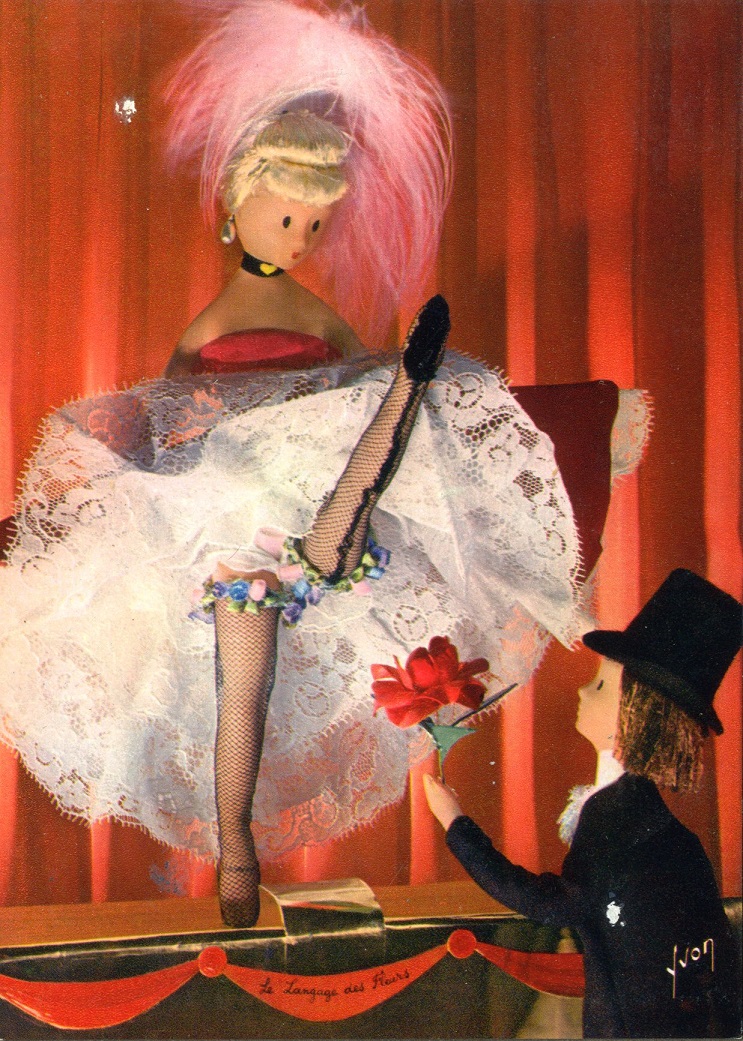 I’m back with more postcards!

During one of the first weeks of working on the Faith Eaton project, Eloisa and I opened up one of Faith’s boxes and found a photograph album. Nothing odd there as Faith has a great many in her collection and it’s always with excited curiosity that we open each album to see what’s been pasted inside.  This particular one, however, was visually striking as it displayed a series of colourful postcards which seemed to depict a doll love story and the images on the postcards made me smile.

This discovery was made while we were still getting a feeling for the extent of Faith’s collection and the work involved in our project, so after looking through the album it went back in its box. But the tableaux of dolls shown on the postcards stayed with me and I felt compelled to return to the album and learn more about the dolls featured inside.

Opening the inside cover of the album I find a booklet entitled Les Poupées Peynet– translated from French as The Peynet Dolls.  The booklet had been attached by tape, which has long since lost its stickiness.

Inside the booklet there are a collection of dolls dressed as different characters; the female dolls are portrayed in numerous roles and outfits, from the Maitresse d’École – teacher, to the more enigmatic descriptions of Doucer de Vivre – the good life and Gros Chagrin – great sorrow.

The male doll appears throughout as either a Violoniste or in French regional dress, as partner to the female doll. I notice he often holds a small red heart out to his female companion.

At the back of this booklet it tells the reader to Collect the Peynet dolls. They will bring you happiness.

These charming dolls had me hooked.  I was now even more curious about the story behind the Peynet dolls, who’ve been made to “bring you happiness.”  Turning the pages of the album I come across the love story that had grabbed my attention a few weeks before and now that I have time to study the postcards more closely, I see they are a series, all with the inscription Le Langage des Fleurs – The Language of Flowers.

The language of flowers equates to the language of love as the doll characters make romantic gestures to each other.  Well, to be accurate the male doll is making most of the declarations of love – but then they were courting several decades ago!  As illustrated so brilliantly on these cards, the Peynet dolls possess a wide range of carefully crafted costumes and accessories; they’re ready for every occasion – be it seaside time, tennis or an evening of cancan. After all this effort to win her heart… the flowers, the outfit changes… I truly hope his feelings are reciprocated.

The remaining postcards in the album show the male and female dolls dressed in other guises whilst two of the postcards, which lie loose in the album, have a banner declaring La nouvelle clé des songes – the new key to dreams. The dolls here playfully illustrate the meaning of dreams, as imagined by Peynet.

Si  vous revez d’un gendarme…… – if you dream of a policeman.  And the reverse of the postcard reads:

….C’est que vous n’avez pas la conscience tranquille – it is that you do not have a clear conscience (Peynet).

Si vous revez de quintuples…. – if you dream of quintuplets. And on the reverse:

The creator of the Peynet dolls definitely had a good sense of humour!

Whether Faith had any of Les Poupées Peynet in her collection and whether it was she who made this album of 25 postcards I cannot say but the postcards illustrating the range reveal the dolls to be fun and hugely appealing in their playfulness. I like to think that it was partly because of this that Faith kept the postcard album in her collection.

Raymond Peynet was a French designer and illustrator, born in Paris in 1908 and it was at the age of 34 that he drew a pair of lovers who went on to became famous images.  It seems Peynet was inspired while sitting near one of the music kiosks (similar to bandstands) that were found throughout Paris.  Here, in the early 1940’s Peynet imagined and sketched a young couple – a long-haired violinist playing in the kiosk and a girl listening to him, admiringly. Les Amoureux de Peynet – the lovers of Peynet, as they are called, were born. Some years later Peynet replaced the violinist with a poet and the girl became his lover.

So, the small red heart is explained! It was really exciting to discover that these dolls were a famous French couple and what’s depicted on the postcards is indeed a doll love story – dreamed up by Raymond Peynet. Further research revealed that the illustrations of Peynet’s lovers have been replicated in many media – as drawings on stamps, scarves, dresses, perfume and porcelain. It seems they’ve become a symbol of love in France. 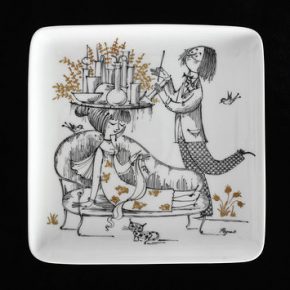 The lovers depicted on a tray, illustration by Peynet, made by Rosenthal AG, 1950s (c) V&A Museum

After beginning life as an illustration, it was in the 1950s and 60s that the lovers were manufactured as latex dolls. With their outfits and accessories for all occasions, Les Amoureux de Peynet appear to be the precursors to Barbie and Ken, albeit with a less knowing look than their American counterparts.

As the postcards show, the faces of the male and female dolls are similar – simple and sweet looking, transformed beautifully from illustrations to 3 dimensional dolls. Their oval black eyes remind me of the charming Mr Benn, the English born children’s character from the late 1960’s and ‘70s, who also had a penchant for dressing up and role playing.

Collected together in an album, these postcards of the Peynet Dolls show the posed doll characters coming alive and, considering how the images drew me in, I believe they must have served as fantastic marketing material for the doll range, not to mention the appeal the dolls themselves must have had for collectors of all ages. It’s fair to say I am now a fan!

We would love to hear from anyone who owns one of these wonderful Peynet dolls or who has any stories of Les Amoureux de Peynet to share.

archives behind the scenes dolls Faith Eaton Museum of Childhood

Unfortunately the foam rubber on a wire armature used for the Peynet dolls means that many of the original dolls as seen in the postcards are now actively deteoriating and dropping to pieces! Gros chagrin, indeed…

A friend of mine has several of these vintage dolls for sale. would you be interested.
Regards

As a child in the 60s I was lucky enough to be taken on holidays to Brittany, France, where I became obsessed with Poupees de Peynet! I had all the postcards and the brochure, and I remember drooling over these dolls whenever I saw them in shop windows. On the last day of the holiday my parents bought me the pair of my choice – the man with the girl in a pink gingham dress. They sat on my dressing table for years but unfortunately the rubber disintregated and I suppose they were thrown away. I wish I’d kept them and the postcards.

I have a Peynet doll I bought in Paris in 2002 In a vintage Antiquities shop. I want to sell the doll. I even have the booklet that came with the doll when I purchased the doll. I was told by the French shopkeeper that I had bought a very valuable doll that is not made anymore. Please let me know if you are interested in purchasing. Thank you. I live in New Jersey USA

I have the bride and groom dolls. They were the centrepiece on my wedding cake in 1967.
We will have been married 50 years in 2017 and discovered that the hotel where we held our reception is still there and still owned by the same family, so we have booked a room for a party there. I retrieved the dolls from storage in Georgia, USA but have not dared take them out of the box yet in case they disintegrate! At the moment we are separated again since I am in USA and the dolls are in London.

I have a Peynet doll called “Pescadou” (fishergirl) which you would be welcome to have if any use, but as others have said, the latex has deteriorated- she has a blackened nose which was probably made worse by attempts to clean. She is wearing a blue and white striped top with red capri pants.
I dithered about buying this one or “Bonne Nuit” but as far as I can remember this was more affordable from my pocket money. I think I would have bought it around 1956.

As a child whenever I went to visit my grandparents in the late 1950’s early 1960’s in France I would be given one as a gift – they are indeed charming. I adored them. I loved taking them out of their boxes and gently playing with them. I have kept them all these years – some are ok, but some are getting damaged – one has lost her foot entirely. Sadly the foam over time has not done well.
I have 10 altogether. I have just found them again as I pack up my house after 26 years and move. I’m not sure I can keep them as I am downsizing. Any suggestions? Thank you.

I have quite a few of these charming dolls – they have been kept in cool, dark conditions which has helped their preservation but with time, the latex hardens and darkens. I also have a similar doll by an unknown maker, depicting Brigitte Bardot, with headscarf, little dog and ballerina slippers. She is not wearing well and has lost a foot – such a shame.

I have three Peynet dolls, they are not in very good condition, their faces are okay but arms and legs crumbling and two have lost their feet. I am glad to have them though, but I wish I had kept the ones I had as a child. Still, it is remarkable that any survive.

Oh dear! I too was allowed to choose a Peynet doll in a toyshop in Bayonne during one of our regular visits to my grandparents. Big treat! I bought a girl figure, wearing a pink bucket hat & a short blue satin dress. She was carrying a hatbox, & it was really this item that I was interested in. Would it open to reveal some treasure? Could I take off the pink hat & pop it into the hatbox? Sadly, no. The hat was glued firmly to the doll’s head, and the hat box failed to open. Early disillusion!

A Treasury of Postcards

By Holly Tatham As Eloisa mentioned in her last post, we’ve spent days looking through and sorting out hundreds of Faith Eaton’s postcards. Whilst doing so we’ve enjoyed and...